Moat Meadow in an enclave of natural beauty in the heart of Kent. The central meadow is bordered on all four sides by thick rows of established broadleaved species, making the open land entirely private. The land also enjoys a well-managed woodland shaw which wraps around two sides of the meadow, as well as a fabulous pond near the entrance, which has a number of potential uses. This rare combination of meadowland, woodland and a pond make this piece of land a rare gem.

Access to the land is by way of a private field gate which leads from a shared access track. Just through the gate is an enclosure sheltered by trees, which provides space to park a number of vehicles, before a second gate leads on to the meadow through a post and rail fence. Here you step in to the heart of the land, a lush pasture field, which stretches out to the west and north in a near perfect square. The meadowland has an agricultural history, formerly as a part of Apple Pie Farm, where a significant apple orchard once stood before its removal around 30 years ago. It has been grazed by livestock in recent years.

Located in the southwest corner of the meadow is a substantial pond, which is bordered by a small belt of trees. The pond is in excellent condition and offers wonderful opportunities for recreation including angling, boating or swimming. For those with conservation interests, the pond could be managed to help wildlife flourish, expanding habitats for newts, frogs, insects and other pondlife.

Valuable diversity is afforded to the land by the charming woodland shaw which wraps around the western and northern edges of the meadow. By way of a third wooden field gate, one leaves the open land to enter a magical stretch of woodland, populated by a mixture of coppice and standard deciduous species. As well as bringing amenity value, the established woodland also serves as a valuable seed source for the open land for those who wish to utilise natural regeneration in combination with active tree planting. The woodland eventually joins up with the larger Benenden Wood, thereby playing an important role as a wildlife corridor through which animals can travel. Badgers, rabbits, deer and farmland birds including pheasant and partridge are just some of the wildlife known to populate the local area. The woodland very gently drops down to two valleys where gently meandering streams can be found, demarcating the western and northern boundaries of the parcel. Watercourses such as these are a valuable resource.

Moat Meadow is ideally suited to those with environmental and amenity interests, being both a vibrant mixed habitat which fosters diverse wildlife as well as an oasis of calm to which one can retreat. With scope to enhance the land through tree planting and rewilding, to compliment the established woodland which already stands, this meadow would appeal to those with a creative streak, wishing to make a meaningful contribution to conserving this quiet corner of Kent.

In their eagerness to preserve this meadow, and as recognition of its value, the local council have given it an extra level of protection by including it within an Article 4 area, which means that it is protected from unsympathetic development. You can read more about that here.

- A central pasture field with excellent potential for tree planting and rewilding.

- A pond in great condition, offering opportunities for recreation and conservation.

- A well managed belt of woodland which flanks the meadow to the west and north.

- Extensive habitats which support a range of wildlife.

- Private entrance and enclosure with ample space for parking.

The land is accessed via a track along which a full right of way will be granted. The meadow comes with freehold title and there are no public rights of way across the land.

Benenden is one of the Wealden 'dens' that commemorate the Saxon practice of appending forest clearings in the sprawling Andredsweald (the Weald) to their coastal manors. These clearings, or dens, were where the manor pigs rooted for the acorns and other 'pannage' on which they were fattened and from which timber and brushwood was collected.

Following the Norman Conquest, the manor of Benenden was given by William the Conqueror to his half-brother, the Bishop of Bayeux. The village was mentioned in the Domesday Book of 1086 as one of only four villages in the Weald to have a Church. It is reffered to as Benendine, its etymology originating from the Old English 'Bynna' meaning 'wooded pasture'.

From around the 14th century, Benenden became a place of indsutrial significance, most notably for the Wealden Ironmasters who contributed to the prosperity of the village.

Boundary features are marked with purple paint, aside from the streams which demarcate the western and part of the northern boundaries.

Moat Meadow is accessed via a metalled road, and then track, which lead from from the B2086, Mounts Hill.

Click here for Bing Maps directions, enter your own postcode, (the location coordinates are already entered), and click on the "Directions" box. This will take you to the field gate at the entrance to the site. Please park about 50m further along by the large poplar trees, and thereafter follow the maps.

Satnav: the postcode TN17 4ET is the nearest to the meadow, but please note that this will take you to Mounts Hill, and not the specific entrance.

In terms of finding the meadow, when heading along the Cranbrook Road and then Mounts Hill (both the B2086) from the Cranbrook / Swattenden direction towards Benenden, you need to look out for a turning on your left hand side signposted for Mounts Farm. There is also a small post-box in the hedge on the other side of the turning to the sign. This turning is the last turning to the left off the B2086 before you reach the signs for Benenden Village, where the speed limit is reduced to 40mph. Head all the way to the end of this metalled road, which is around 0.5km. At this point, the road turns into a wooded track, continue along here and pass through the field gate before parking by the large poplar trees at the end. Please then walk following the green highlighted route on the maps, which will take you across the large field directly in front of you, before turning 90 degrees to your left. Follow straight for around 50m and the entrance to Moat Meadow is on your right hand side.

An exceptional meadow with a pond and woodland shaw in the heart of Kent. Bordered on all sides by established broadleaved trees; a truly private piece of land. 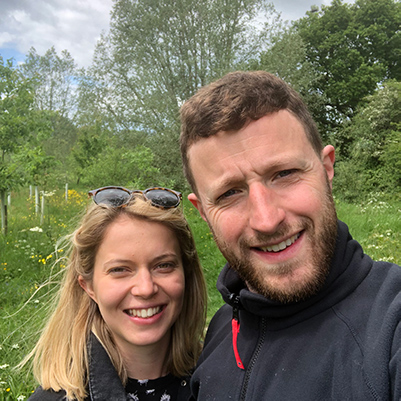 A rare and substantial coastal meadow in a magical setting on the Pembrokeshire coast. A small private meadow set in an idyllic part of Pembrokeshire with fabulous sea views. A private meadow on the Devon / Cornwall border with an enviable mix of open planting land, a woodland fringe and stream.