Coed Ceridwen, named for the beautiful sorceress of Welsh mythology who held powers of transformation. Read her story here...Ceridwen.

A lovely peaceful woodland in a tranquil location with beautiful views out through neighbouring woodland to the west and north. The larch in Coed Ceridwen is well grown and access through the woodland is not too challenging despite its sloping terrain, as various grasses, ferns, and heathers keep scrub and undergrowth in check for the most part. The rocky bluffs rising up beyond the eastern boundary are an attractive backdrop to the woodland and make for some interesting exploring and habitat. Towards the south eastern corner some small level areas open up and the trackway into Coed Ceridwen, which could be cleared further or widened in part, provides level space for camping and woodland activities.

The majority of Coed Ceridwen is mainly made up of mature larch, well grown and well spaced. Underfoot sees various soft grasses, mosses, ferns and colourful heathers, as well as some bramble and dotted throughout areas of lichen flocked rock.

Around the fringes, there is a small amount of various broadleaf, of mixed age, including rowan, birch, older oak and some ash. Throughout the woodland holly and some hazel form a sparse and intermittent understory and there is some natural regeneration of larch. There are more thickets of holly growing up and along the top of the ridge and over and between the rocky bluffs which rise up to and beyond the eastern boundary.

There is a wide variety of bird life here in the secluded reaches of Ceredigion, including sea birds as it is only a couple of miles from the coastline at Borth. Just a few miles further north is the Cors Dyfi Nature Reserve sited at the mouth of the Dyfi Estuary which is home to the Dyfi Osprey Project .

Buzzards and red kite can be seen over head, circling in the thermals.

The rocky outcrops sport some lovely mosses and lichens, and heather grows well in some areas of this upland woodland. Native rowan sport fabulous red berries attracting birds and wildlife.

An accessible woodland, a short distance along a good track from the gated entrance off a minor road, and then a grassy track accessible to vehicles, terminating towards the middle of the wood.

There are no public footpaths through Coed Ceridwen.

Bird watching, camping, or just watching nature and the changing seasons. There is plenty to explore along the nearby Ceredigion coastline and this would be a wonderful base from which to do it.

Ceridwen is also known as the mother of one of Wales' most famous bards, Taliesin, the remains of whose burial place is reputed to be a couple of miles north of Talybont, and a mile east of the eponymous village Tre Taliesin.

Just west of there can be found the wonderful dunes of Ynyslas beach, and a little further south at Borth you may spot the petrified remains of an ancient forest previously buried in sand but gradually uncovered by storms since 2014.

The boundaries of Coed Ceridwen are marked in orange paint on wooden marker stakes, trees and fence posts.

The western boundary is marked by the shared access track.

The northern boundary is marked by the neighbouring woodlands access track.

The eastern boundary is marked with orange paint on trees and wooden marker stakes.

The southern boundary runs along the road.

Follow the A487 to the village of Talybont, approximately 7 miles from Aberystwyth or 10 miles from Machynlleth.

Continue on this road towards Bont Goch, taking the left fork BEFORE you pass the red telephone box on the left.

Follow the road uphill until after a short distance you will see a wooden gate on your left with a Woodlands for Sale sign on it.

Turn in and park up here, taking care not to block the gate and continue over the gate on foot. Follow the main track though the woodland until you see the entrance to Coed Ceridwen, marked with a wooden name board and Woodlands for sale sign, a short distance up the hill on your right.

A predominantly larch woodland with a fringe of mixed broadleaf in a beautiful quiet location, only ten or so minutes from the West Wales coastline, with good access.

Managed by Tamsin and Matt Brown 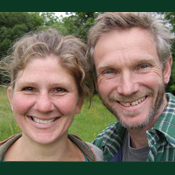 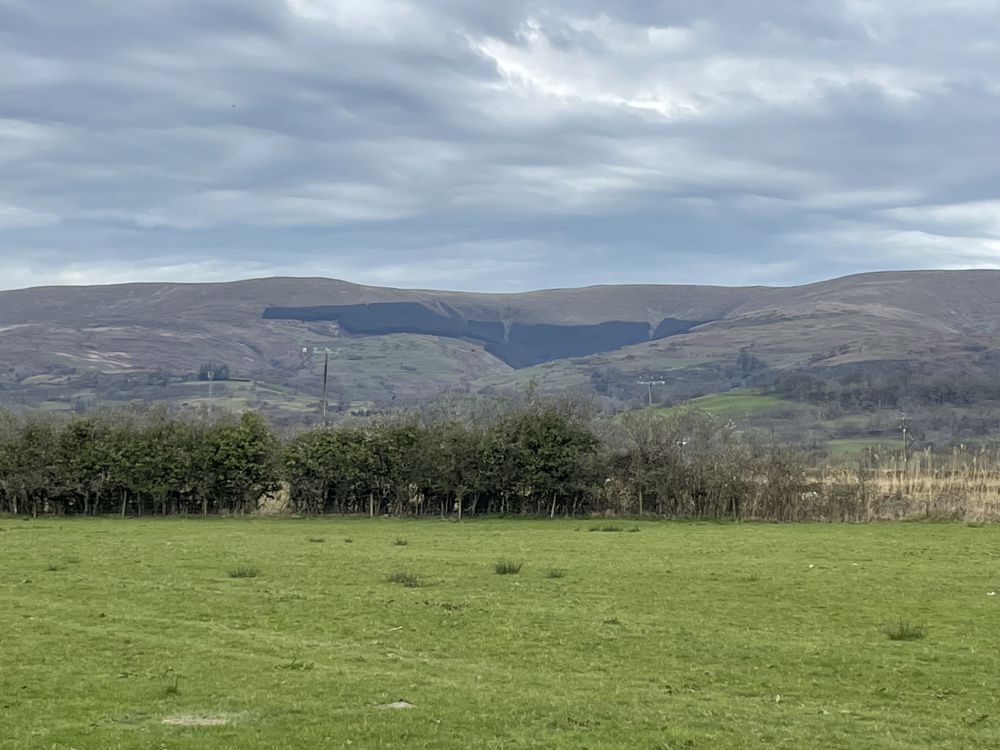 Young, mainly broadleaf plantation woodland with areas of wetland, level throughout with excellent private access directly off the A487 . 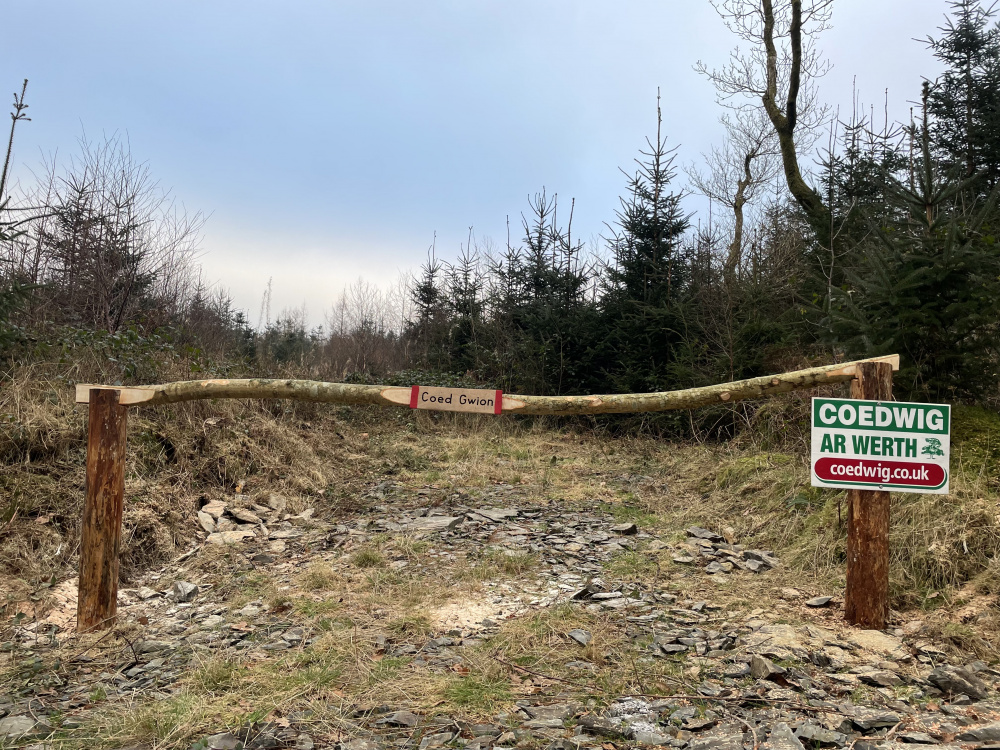 The last area of this beautiful, quiet, secluded woodland of mainly mixed conifer and some broadleaf, with lovely views out southwards, minutes away from the Ceredigion coastline. 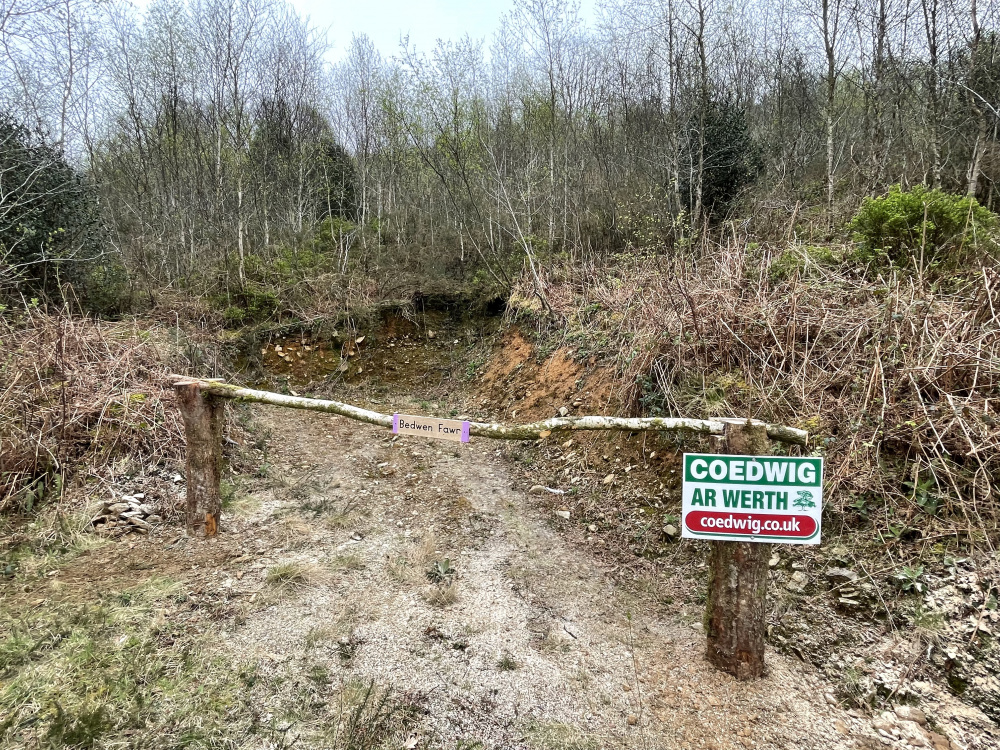 Steeply wooded hillside, north facing but with a very open aspect, set high towards the ridge top with views out over and through the tree canopy.