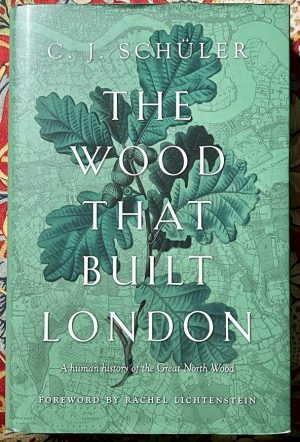 A magnificent book about a woodland which dominates south London, even though only pockets of the woodland remain.  The author pulls off the trick of using the story of the Great North Wood to relate centuries of social history and much about woodland ecology.  It's gritty, too, and it soon becomes apparent that Christopher Schuler doesn't just volunteer in Dulwich Woods, a sizable remnant from the Great North Wood, but he also loves the woodland.

The Great North Wood was really big - several thousand acres in extent - stretching seven miles from Croydon to Deptford and even the remaining segments run from Dulwich to Norwood (a shortened version of "North Wood").  It was also an important resource for many centuries mostly for firewood, building timbers and of oak trees for naval building.  But Schuler demonstrates the richness of its history and the contradictions in the way it has been managed - in the 18th century cash payments were made by the parishes to anyone bringing in badger heads or other "vermin", which we would now consider valuable wildlife.

One tradition which Schuler explains went on for centuries, was the "beating of the bounds" where on a set day on April (25th, Rogation Day) every year the Parish boundaries were followed on foot by a formal group.  The members of this group would literally beat sticks against trees along the boundaries and mark some by carving crosses into them.  In order to make sure the boundaries were remembered they made sure that old men were included who remembered earlier "beating of the bounds" and teenage boys who would be expected to remember the boundaries for decades to come.  In order to help them remember more clearly their hands were sometimes pricked at key points so that they would be more likely to recall the spot. Often there was merriment and drinking on such occasions but there was also a seriousness as at certain notable points the priest would say prayers.  One of the more famous spots was the Vicars Oak at the end of the road which is now called Crystal Palace Parade.  This was a tree on the boundary of three different parishes and being at the top of a ridge was visible for miles around. 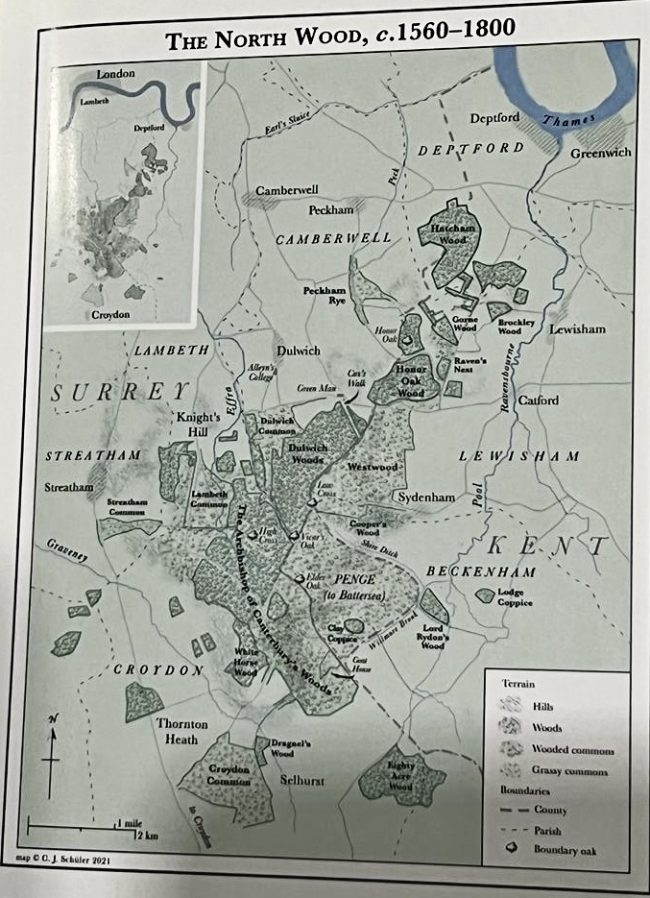 Many bodies influenced the course of the woodland - for a long period it was forbidden to cut any oaks for other than naval use in order to ensure the navy had enough timber which could be moved to a navigable waterway. The dominant owners over the centuries were various church organisations, although the freehold of most of Dulwich Woods now belongs to the Dulwich Estate and Southwark Council.  Both organisations tried to build housing on the woodlands in recent decades but this has been successfully resisted by conservationists, and the London Wildlife Trust (LWT) now manages most of the Dulwich Woods part of the Great North Wood.  Many people volunteer for the LWT and some have fought hard to stop oak trees being felled for bridge repairs or other expedient reasons.

Christopher Schuler's "The Wood that Built London" will be the defining work on the Great North Wood for a long time to come. It was through the industry of London's labourers, as Schuler states,  that "the Great North Wood fuelled - quite literally - the growth of the great city that would ultimately consume it."