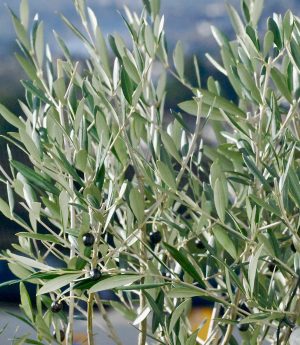 The olive tree [Olea europaea] , is an evergreen tree native to the mediterranean area.  Indeed, it is often cited as an ‘indicator plant’ for the area. It is of major agricultural importance throughout the mediterranean basin as it is the source of olive oil.

Generally, the outline of the tree is somewhat short and squat†, its height varies between 8 –15 M. The oblong/spear-shaped leaves are silvery green; the upper surface is green, whereas the lower surface is more silvery. The leaves measure between 4–10 cm in length and are between 1–3 cm in width. Olive trees can be very long lived and, as the tree ages, the trunk frequently becomes gnarled and twisted.  The tree produces small, white, ‘feathery’ flowers on the previous year's growth.

The olive fruit is a small stone fruit , i.e. a drupe between 1–2.5 cm long.  The fruit is smaller in wild plants than in the cultivars seen in the olive groves. Many other fruits (the almond, apricot, cherry, damson, nectarine, and plum) are also drupes. 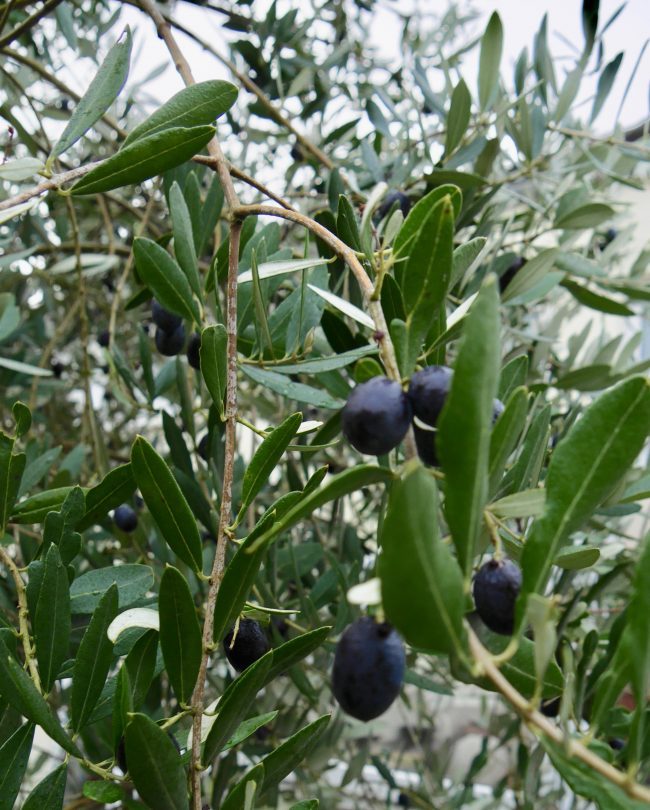 Olives are harvested when green or purple and then are pressed or ground up to extract the oil.  The oil has many uses - apart from the culinary.  For example, it is used in lamps in religious ceremonies, in skin care / cosmetic products, and as a lubricant. 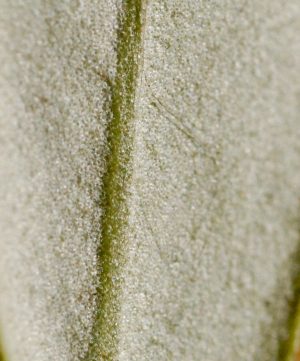 The cultivation of the olive dates back many thousands of years.  As far back as 3000 BC, olives were grown commercially in Crete where, some have suggested, they might have been the source of the wealth of the Minoan Civilisation.   Olive oil has been traded throughout the Mediterranean throughout historic times.  Wreaths of olive branches was used in the burial of Tutankhamen.

Some of the Tutankhamen wreathes, [which date from 1327 BC] are held by Kew Gardens, and were used by researchers (Beerling and Chaloner*) to compare the number of stomates on the undersides of the leaves with more modern olives (and some herbarium specimens from the nineteenth century).

The number of stomates (per unit leaf area) on the more modern olive leaves is approximately 530 stomates per mm2 .This is significantly lower than the average density on the ancient Egyptian (or indeed nineteenth century) olive leaves of 790 stomates per mm2 in 1372 BC. This is in line with studies in controlled environments which showed that as CO2 levels increase so stomatal density falls.  As of January this year, the level of CO2 in the atmosphere is 413.4 ppm (as measured at Mauna Loa, Hawaii ). The last two centuries have seen the extensive extraction and burning of fossil fuels (oil, coal & gas). Prior to this, in pre-industrial times, the level of carbon dioxide was circa 280 ppm, as estimated during the ‘Middle Ages’.

† An exception to this general form is the variety / cultivar ‘Pisciottana', found in the Campania region of southern Italy.