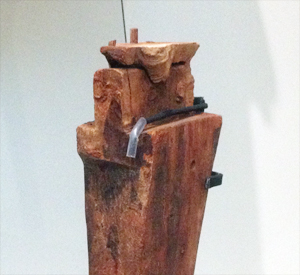 Nick Humphrey is the curator of the new furniture gallery at the V&A (Victoria and Albert Museum) and he points out the paradox that a museum thought of as specialising in furniture did not, until late last year, actually have a dedicated furniture gallery.   It has plenty of galleries for particular regions or cultures but it didn't have one just for furniture. This new furniture gallery is also arranged unusually - rather than looking at one period, is it set out by techniques of manufacture, so that there is a section on joints and others on carving and on finishes.

Across time it covers a huge range as shown by the display on dovetail joints where a 14th century mortice and tenon joint is displayed right next to a double mortice and tenon joint from the Egyptians - made around 1400 BC (see image above), almost 3,000 years earlier.  Another technique which has its own section is 'hollowing out' and there is a contemporary chair 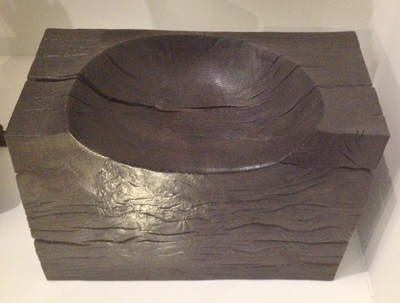 hollowed out from a solid piece of oak by Jim Partridge and Liz Walmsley (www.jplw.co.uk). Altogether there are 200 pieces in the gallery which have been chosen from the V&A collection not for how well-known they are but for how interesting.

Although historically most furniture has been made from wood, it isn't easy to define what furniture actually is. Nick Humphrey works on the definition of "moveable domestic pieces" and he says there are three elements to all successful furniture: design, manufacture and marketing. Often people have had just two of these such as Chippendale who was a great manufacturer and marketer but "borrowed" most of his designs from earlier works. Another featured designer is Frank Lloyd Wright with his high backed chairs and long parallel supports. My own favourite observation about furniture design is that it is like architecture but on a smaller scale. 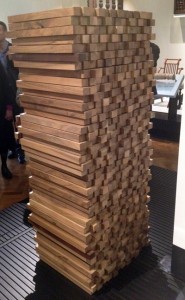 Different timber is suitable for different roles in furniture making so the RFS visit saw lime wood used in carving, beech for structural jobs and pinewood for providing backing material. Not content with showing off the furniture pieces the gallery also has interactive displays which give vastly more information than is possible with old-fashioned 50 word captions. Instead of those,  the touch displays allow you to get a load of information such as films of veneering and plenty of old footage showing how furniture was actually made in the past. In terms of showing furniture making with green woodwork in woodlands there is a leg for a "Welsh Chair" made on a pole lathe, which was produced in Herefordshire by Gudrun Leitz

Some of the furniture is not what it seems: the "Wooden Heap" by the Swiss designer Boris Dennier looks at first glance like a pile of walnut blocks but is in fact a chest of drawers with 6 perfectly useable drawer units which themselves can be stacked in various configurations. But London is a long way from working woodlands and you can visit the furniture gallery online at: www.vam.ac.uk/page/f/furniture/

As a mature art student I am thinking ahead about a major project in conceptual art which may involve Witches Wood, Capel St Mary. Can anyone tell me any of the history or where I might find it? Did the name arise as a result of the dark arts, bearing in mind Matthew Hopkins was born only a few miles away? How can I find out who the owners are? Was it part of a larger wood, if so are there any maps supporting that?
Any help would be most useful.