“The art of camping” book by Matthew de Abaitua 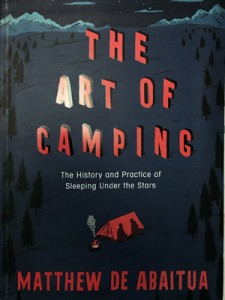 Camping is booming - one in five adults in the UK has been camping or caravanning in the last 3 years: increasingly people want to get away from their screens and get back to nature.  Pitching a tent, as De Abaitua says, is "an act of hope, that you might experience something truthful and be improved by the experience, but, most of all, hope that it will not rain."

The Art of Camping is also a history of camping which covers Britain and the USA from the 19th century onwards and introduces us to some extraordinarily adventurous campers, such as Ernest Thompson Seton who inspired a movement called the Woodcraft Way which in turn led to the mass camping movements such as the Scouts and Guides and on both sides of the Atlantic and to the educational summer camps of America.  But his pioneering work also led to radical camping groups such as the Kindred of the Kibbo Kift with whacky experiments in camping culminating in ritual ceremonies involving dressing up and the use of Egyptian hieroglyphs.  Like many outdoor groups, including Cub Scouts, the Kindred of the Kibbo Kift members were given new names which, as Matthew De Abaitua points out, severed the link with the class-bound life outside camp, allowing each member to create themselves within a new order.  Men typically took the names of animals while women the names of plants and herbs. 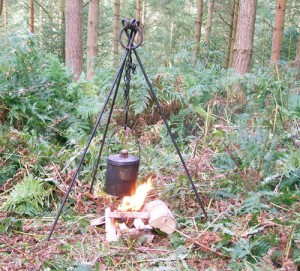 Ernest Seton wrote best-selling books about how to camp and in one of these (The Birchbark Roll, 1906) he observed that the whole American nation was turning to the outdoor life "and the culmination of that outdoor life is camping".  In his guidebooks he encouraged campers to stick together around the campfire and he would have been horrified by today's American Boy Scouts attitude to risk - their website nowadays encourages boy Scouts, for safety purposes, to use camp stoves rather than campfires!

In the US, the motor car both imperilled and opened up the wilderness - for example Henry Ford famously camped out with Thomas Edison.  But many other American luminaries also camped out, such as the big game hunter, Theodore Roosevelt even while he was still US President.  He embarked on an expedition with John Muir into what was to become the Yosemite National Park.  Over the campfire the 65-year-old Muir, a keen conservationist, spoke freely to the President who was 20 years his junior, asking him, "Mr President, when are you going to get over this infantile need to kill the animals?"  The campfire and free speech go well together as the hierarchies of normal life are suspended - by the time Roosevelt left office he had doubled the number of national parks in the USA and protected an extra 100 million acres of wilderness.

Camping in Britain carried on throughout the second world war albeit in camouflaged tents and with a very strict lights-out policy.  The real surge in camping began not in 1946 when the war ended but from May 1950 when petrol stopped being rationed - the age of mass car camping had begun.  Matthew De Abaitua describes, hilariously, his own experience that will be common to many - of travelling as a child in the back of an overloaded car for many hours to get to a remote French campsite where your pitch is too close to neighbouring tents and the campers are preoccupied by the state of the toilets and the high prices in the campsite shop.  By contrast, Matthew describes the joy of wild camping in woodlands and moorlands, especially when things go to plan.  According to his wife, Cathy, the secret of success is packing as light as possible with maximum utility and minimum weight - "if you are packing a camping carpet, ask yourself if you have the right hobby."   De Abaitua himself is not only an experienced expedition planner but he is generally a very happy camper: he says, "if there is one thing a camper loves more than camping, it is dreaming about the next trip."