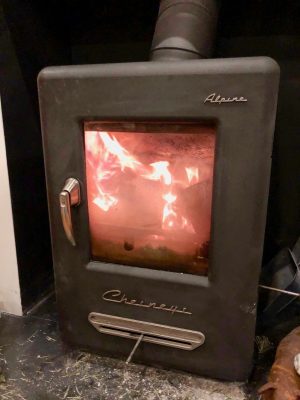 Wood is made up of three main chemicals - cellulose, hemi-cellulose and lignin.  Cellulose is a long chain-like molecule made up of glucose residues; it is the main component of both hard and soft woods.  Hemi-cellulose is chemically more diverse than cellulose - with a variety of sugars present such as xylose, mannose, galactose & arabinose.  Lignin is a very complex chemical, again a polymer with much cross linking.  The lignin binds to and holds all the components of wood together.

When wood is burnt completely about half the mass of the wood is converted to carbon dioxide, and about half to water.  This process releases large amounts of energy - approximately 20MJ per kg.  This represents light energy that the tree trapped through photosynthesis.   What is termed the primary combustion of wood is the burning of the solid material - the embers, the charcoal, whereas secondary combustion is the burning of the gases /fuels producing the flames of a fire.  Incomplete combustion of wood results in smoke, the production of carbon monoxide, nitrogen oxides, and minute particles. Wood smoke contains many toxic components such as formaldehyde, benzene and various aromatic hydrocarbons (such as benzo[a]pyrene).

As a result of various policy initiatives to promote heating and electricity from renewable resources (such as the renewable heat incentive, Feed in tariffs etc), the burning of biomass has increased and more homes are using wood as a fuel (one estimate is that 1.5 million homes use wood for fuel).

The woodlands blog has written about the pros and cons of different woods in stoves, and Angus has written enthusiastically about the installation of his wood burning stove.  However, a number of reports have recently focused on the contribution that such stoves can make to air pollution .

Burning wood in a grate or a stove may seem benign but wood smoke contains the chemicals spoken of above, and soot.   Wood burning in the home can release chemicals and  into the immediate environment and the surrounding area.  Particulates are the sum of all solid and liquid particles present in the air, it is a complex mixture that includes both organic and inorganic particles [dust, pollen, soot, smoke, and liquid droplets  - all contribute]. Such particles vary in size, composition, and origin. 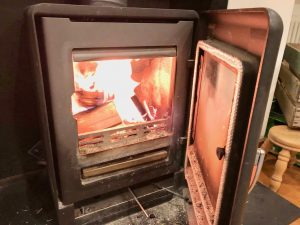 Particles in air are either: 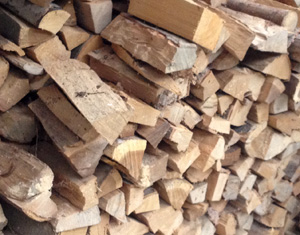 The damaging effects of particulates is now well documented.  The effects include a reduction of life expectancy.  Increased chronic bronchitis and chronic obstructive pulmonary disease (COPD) rates, and reduced lung function have been associated with particulate pollution.  Michael Gove [the Environment Secretary] is quoted as saying “ Air pollution shortens lives, harms our children and reduces quality of life.  We must take strong urgent action” .

The Government is considering bans on the household burning of coal and wet wood (which produces more smoke and less energy than dry wood), and giving additional powers to local authorities to enforce the rules.  This new initiative is referred to as the Clean Air Strategy.