Tree trunks (and some of the roots) are covered with bark. Bark is the material or tissue that overlays and surrounds the wood (xylem tissue) of a tree. It consists of a number of different tissues, whose amount varies from species to species.   The outermost layer consists of dead cells – the cork. The bark protects the tree from dehydration, from physical damage or fire (sometimes), and disease due to bacteria and fungi. It may also offer a home to insects and various epiphytes (mosses and lichens).

Bark is also a source of many valuable substances or materials. Aspirin was derived from willow bark - as far back as the 5th century BC Hippocrates used a preparation from willow to ease aches and pains - and quinine was extracted from the bark of the Cinchona tree (otherwise known as Jesuit’s Bark). 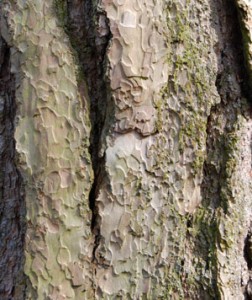 The bark and leaves of various yew species contain a chemical, paclitaxel, which offers hope as an anti-cancer drug. The bark of many trees (such as oak and sweet chestnut) is an excellent source of tannins, which are used in the treatment of animal skins to make leather. Incidentally, tannins (though different ones) are also responsible for the flavour of your cup of tea or a glass of wine. The bits of bark left over from timber production are often chopped up and bagged, to be sold on as an environmentally friendly mulch or decorative material for gardens, making use of what would otherwise be a waste material.

The leaves are about 7/8 inches in width so I have dismissed Maple as they are (I think) smaller.

If the leaf is sycamore-like, then perhaps a type of maple???

I was recently in Bowness on Windemere and in the grounds of my hotel are two trees which are different from any I have seen before. The leaves look very like Sycamore but the trunks are amazing. They must be 6-7 feet in diameter and about 9ft in height before any branches appear. They seem very old as the trees themselves are huge but the trunks are very rough with nodules and bark and it almost looks as though they have been sprayed with mud, on some of the nodules are leaf. I asked at the hotel but found no answers, they have a firm in to do the grounds!I would love some feedback as to what they are. I’ll admit they were very huggable.

For a longer story about the use of yew in the treatment of cancer, do contact me for a copy of Living Woods magazine, if you haven’t seen one already. This is only available by subscription, but we give away trial copies.

No.
The isolation, purification, and the subsequent modification of the ‘chemical’ from Yew is very complex. It is sometimes used in the treatment of ovarian cancer.
NB.Yew is poisonous see:-

is there a recipe and method available to make anti cancer medecine from the yew bark you mention?
be well