Protecting woodlands from pests and pathogens. 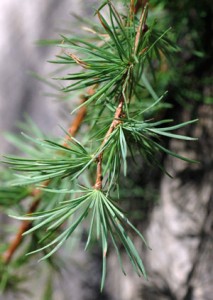 The fact that UK is an island has kept many potential pathogens and pests ‘at bay’.  However,  in recent times the growth volume of international trade has become a cause for concern.  Pests and pathogens can ‘hide’ in important plants and plant products (for example, timber that has not been debarked or suitably treated).

The Great Spruce Bark Beetle is likely to have arrived here in wood that had not had its bark fully removed.  The beetle breeds under the bark of trees, creating tunnels resulting in the destruction of the cambium.  The cambium is a highly active tissue, producing new cells that will go on to form xylem and phloem tissue.  These tissues distribute nutrients and water around the tree.  With a damaged cambium, a tree is weakened and more susceptible to other pests or pathogens.

In the case of the Great Spruce Bark Beetle, a bio-control measure was allowed; a natural predator of the bark beetle has been introduced (Rhizophagus grandis).  Consequently, the numbers of bark beetles have fallen.  Wherever the bark beetle goes, its predator sooner or later follows.  It is thought that its predator ‘finds’ the bark beetles due to the volatile chemicals released from the bark as a result of the beetles' burrowing activities. 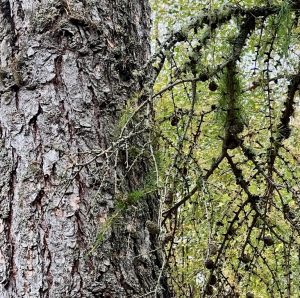 Phytophora ramorum is a disease of many plants that probably arrived here through the plant import trade.  It has persisted at a relatively low level for many years but from 2009 onwards it affected commercial stands of larch in South West England.  Felling of infected trees helps restrict the spread of this fungus-like pathogen; and a map is available to show where outbreaks of this disease have occurred.

Clearly, these introduced species of pest / pathogen could significantly affect the make-up of our woodlands over the coming years, if diseases like acute oak decline / ash dieback are not controlled or contained.  Fortunately, the spread of disease-causing organisms and pests is monitored by both national and international organisations such as these :