You are here: Home > Blog > Off rotation > Urban Foxes 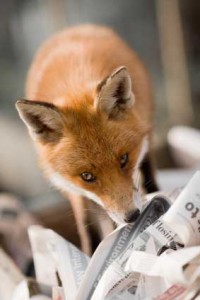 Foxes are presently much in the news. Twin sisters, aged nine months, were mauled by a fox as they slept (in an upstairs bedroom) at their family home in Stoke Newington in North London.  It is thought that the animal entered through a window that had been left open – as the night was warm and humid.  Since this incident, other attacks on people and pets have been reported.

Many people are disturbed during the night by the strange, ‘metallic' screams of foxes, especially during their mating system (December through to February).  There are significant numbers of foxes in our cities.  Estimates vary but it is thought that there are some 30,000 or more urban foxes or ‘townies’ and perhaps 250,000 foxes in total throughout the U.K.  The average life of an urban fox has been estimated at about eighteen months; many foxes are killed on the roads. In the wild, a fox can live for up to 8 years.

In Scotland, a fox’s territory can range over several miles but in towns their territories are much smaller.  They survive, in part, because we are careless in terms of the disposal of our waste food; and also because some people put out food for foxes.  In the country, their diet would include small mammals, bird eggs, insects, earthworms, wild fruits / berries and carrion.

Foxes usually shelter (and breed) in an ‘earth or den’, which is generally below ground.  However, in urban situations, they will often live underneath sheds and other outbuildings.  They tend to live in family groups with a dominant female (vixen), a male (dog) and some subordinate vixens – which may be the young from the previous year.  As in the wild, urban foxes will kill small mammals – in towns and cities these may be rabbits and guinea pigs; but also chickens if 'available'.

Fox populations were severely affected by sarcoptic mange in the 1990's.   This is a skin condition caused by a mite (small, spider like animal), which can cause significant hair loss. It can be passed on to pet cats and dogs. Foxes may also have parasites such as the round worm Toxocara canis and the tapeworm Echinococcus granulosus. These also occur in dogs and the worm eggs can be transferred between the different hosts of the worm(s).  For more information on foxes, visit the fox website. This informative site is maintained by the Mammal Group, at the University of Bristol. 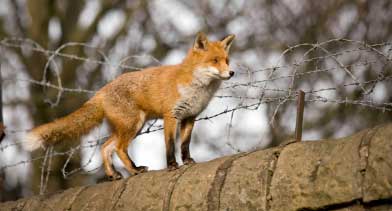 Foxes are now well established in towns and cities, being attracted to the large gardens associated with some houses / properties as well as the readily available food.  The fox is not the only animal to have made the 'transition' from rural to urban living.  Some bumble bees are now common in urban and sub-urban gardens, finding a more varied supply of flowers and nectar than the countryside. Agriculture supports large acreages of monocultures but there has been a reduction in the last few decades in the numbers of field and hedgerow flowers. Swifts, which traditionally found nesting places in cliffs, crags, hollow trees, now make use of many urban buildings.  Herring gulls can be found at rubbish tips across the country, and can be a significant problem in some areas . The use of brown field sites within towns and cities for the construction of houses, flats, affordable homes may well result in the decline of some urban species.  In recent years, some birds species (like the sparrow) have declined in urban / sub-urban areas.

‘Dealing’ with foxes is not easy.  The most effective deterrent is ensuring that there is a high fence around the garden – advice on various forms of fencing is available from the Natural England website. It is also important to make sure that no food is available e.g. from bird tables  (have a covered table at least 5ft above the ground), clear away fruit that falls to the ground, and make sure that all refuse / waste containers are secure.

Would not want to meet one of these outsize foxes !!
http://www.bbc.co.uk/news/uk-scotland-north-east-orkney-shetland-17259087

I would not disagree with much of that. The waste, the ‘adoption’ of some fox families plus one is confronted by such dogs in the streets.
However, there do seem to be some foxes that are a problem………
http://www.bbc.co.uk/news/uk-11249182

Any issue with urban foxes is man made… we are dirty, wasteful creatures.. what can you expect except fot foxes to move in and mop up.

i handle loads of foxes and they are fearful of us by nature.. any boldness comes from treating them like toys for our indulgunce.

the attacks on the girls was rather suspicious in my view, and i suspect the papers `bent` on it was flawed.. The press go to great lengths to `sensationalise` such things.

Having recently seen some `footage` of a child with parts of their body torn off by a `status` dog we should worry more about things closer to home.

I suspect that the view that you hold might be dependent on whether you have young children playing in your garden. The foxes that visit our garden are very ‘bold’, they do not disappear when you go out into the garden but stand their ground. By comparison, I suspect that their country cousins are much more circumspect in their dealings with humans.

There is no real reason to keep foxes from our gardens. The case of the two injured girls was very unusual indeed – foxes would not usually be expected to attack people. Domestic dogs are regularly associated with serious injuries to children, but foxes are not.

People who like woodlands like to be out in the natural world, and foxes are part of that.