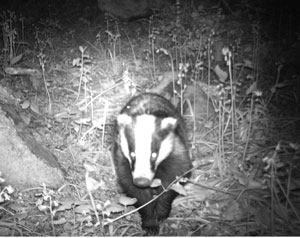 There is a lot going on in the woods which you don’t see. Well, I don’t see it anyhow. I clomp around in my big boots, singing little ditties, letting my dog roam free, blissfully unaware of the havoc I am causing. Meanwhile every creature for miles around is bolting for cover, hiding away, disappearing until the danger is past. I guess if I had the patience I could set up a hide and wait quietly.  Might have to tape up the dog for that to work. However, while I have the greatest admiration for people that can sit for hours without even a twitch, I am not one of them.

Plan B then is to set up a camera to keep an eye on things while I am away. A friend of mine, Pete, has lent me a very nice Bushnell Trophy Cam B. http://www.bushnell.com/products/trail-cameras/trophy-cam/ .

This does not look much like a conventional camera, more like a plastic box with some bits on the front. 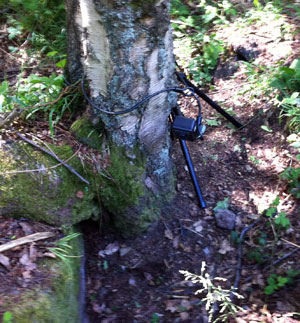 It comes with a nylon strap so that you can fasten it to a tree but it can also be mounted on a tripod. I think it is designed to help with hunting in the American wilderness (they are quite keen on hunting). No hunting for me although it does fine for spotting animals in my woods.

This camera has a motion sensor. So if something pops up in front of it then it gets snapped. You can also set it to take short video clips. Even better, it can take photos at night. Not only does it have an infra-red (IR) camera but also an IR light. This is made of 40 special LEDs which emit IR so they don’t scare anything away. Finally there is a hole you can fit a padlock through. I use this along with a steel cable around a tree so that it could not be easily removed.

After a brief scan of the manual I decided to leave all the controls on their default settings and strapped the camera to a tree in front of what might have been a fox hole. Wasn’t really sure it was a fox hole but it certainly looked the way I thought a fox hole should look. 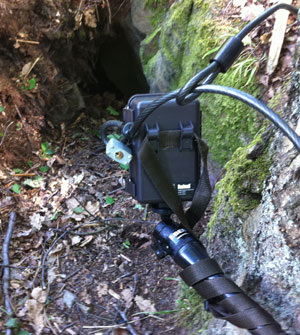 Came back the next morning and was stunned to find some pictures of a fox nosing around. The pictures are not brilliant quality but then I am not in the wildlife film business (apart from featured image above, see small gallery of photos below). For just finding out what is going on they are great. Tried a few more interesting looking holes and was eventually rewarded by getting some pics of a couple of fox cubs.

So now I am getting to leave the camera set up whenever I leave the woods. I usually try and find somewhere that it is not too obvious for anyone passing by. I also try and find somewhere that might be interesting. There is a badger trail in one corner which has been very fruitful. Every couple of nights or so the badger comes trotting past. Naturally I keep coming back to the fox holes and keep a check on my cubs. 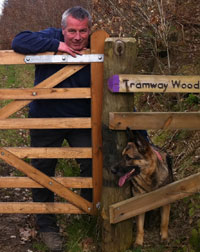 Recently I’ve been experimenting with leaving bits of food in front of the camera. First time I tried that I got a nice shot of my dog stealing the snacks. I’ve also been trying to work out the best place to put the camera to photograph the woodpeckers. This is proving a little problematic and may involve clambering around in trees. I’ve heard them banging away early in the morning but have yet to see one close up.

A final thing I learnt. If you leave the camera fairly low down on a tree near a path. If the path is used by people walking their dogs. You are quite likely to get a picture of a dog ‘marking’ the camera.

Some denizens of my woodland 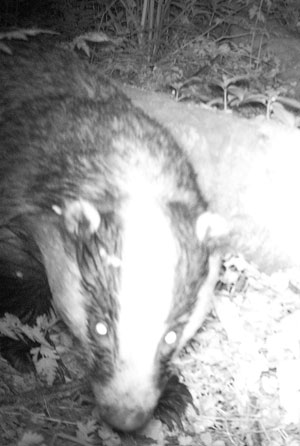 Mature badger on nightly walk about 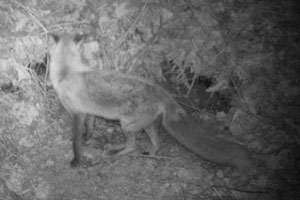 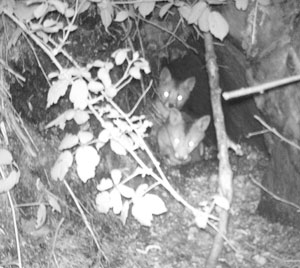 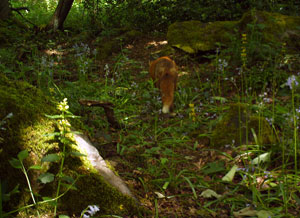 Fox on a stroll during the day

I am very interested in these cameras, but in particular I would like to know if the infra red light is completely invisible to the HUMAN eye. I know they are all quite dim, but is there one that a human would not see at all in darkness?
Can anyone help with advice please?
Graham

Ah those boar videos are great. I didn’t even know there were woods with wild boar in this country.
Going to get the camera out again soon. Been trying to think of ways to safeguard it a bit better. Camouflage would probably help. Even wondered about setting up a second camera to watch the first. For now I’ll just use it overnight while I am camping up there so that I can keep a bit of an eye out.

Love your pictures Simon and so sorry to hear of the theft. We had 2 cameras stolen, both locked to trees – one person even cut down the tree to get to it. Yes, grr. Anyway, we got some great video of boar:

cool phototraps mate, hopefully some wildcat will get caught in Scotland!

Well someone just nicked my tripod. The camera was padlocked to a tree and I would not be surprised if they were going to come back later for that with some tools. They managed to take the tripod without letting the camera get a picture of them – so I think they understood what was going on. Makes me feel like I should not allow anyone into the woods.

Hi Simon,
very interesting article, thanks for the camera tips. I spend quite a lot of time in my woods looking for wildlife but my german shepherd must scare them away. There are lots of deer, foxes & badgers around and some very interesting holes. The woodpeckers are a real challenge to photograph but i’m not giving up. Will be interested to see any more pics you manage to get.I will be investing in a camera asap.

You have got some wicked pics on your blog Colin. A portfolio to be proud of. Is that your German Shepherd too? Thanks for all the advice. I’ll be trying the peanuts over the next few weeks. I’m a bit concerned about the camera stealing, thieving bastards! (sorry moderator). Maybe the trick is to hide the camera away or disguise it in some way.
I’ll post more pics here if I get some good ones.
Cheers, Simon

I use trail cams a lot in my wood. They are undoubtedly the best way to catch creatures of the night. Before I discovered this I accidentally spent £500 on night vision kit, don’t make that mistake. I seldom use my night vision stuff.

Although I get good results with infra red cameras, I prefer flash. I like to see colour photographs, particularly Badgers (Black and White animals). I am in East Sussex and we have Boar but I have also captured the Fallow Deer and I like the Foxes.

Very few animals seem to be bothered by camera flash. Badgers come right into my camp and I can take pictures of them, they don’t seem to notice until I rustle.

I always bait my cameras and that is a bit scientific. After time you learn what animals like to eat and you can bait specifically. Badgers are easy, they like peanuts.

Although this sort of kit can be expensive cheap stuff can give very good results. There is a company called Tasco that do a very modest range, I haven’t used them but I probably will do next time. People do steal the cameras that I leave in the wood, two of the three that I have bought so far. Locks don’t work and are just an added expense. They just chop down the tree. The last camera that I bought was a Bushnell Trophy Cam. I can’t really give you a report. I put it out and I never saw it again (£230) Some of my cameras have lasted for a good time and have given me good results.

I would really recommend this as a good way to get some knowledge of what is going on in your wood because there is much more going on than you or I can see.

I am blogging on WordPress, http://sussexwoodland.wordpress.com Look for “mammals” if you want to see trail cam and what to expect.

Fantastic – I love the fox cubs!

well done Simes, i shall be following this with baited breath, its great to see “City Folk” doing something fo their bit in the countryside Love it x