You are here: Home > Blog > Woodland Activities > Filming your woodland ​with a drone

Filming your woodland ​with a drone ~ by Angus 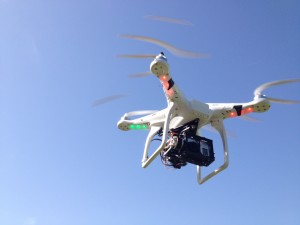 "When I first got the drone I was frightened to go out into a public space in case people thought I was nerdy. But in a woodland it's more private and the bigger concern is ​avoiding ​crashing into trees," explains Dan Bridge while showing me his quadcopter - a model helicopter with four rotary blades. He uses th​is​ drone to carry a camera up above the tree canopy and to film the tops of trees as well as filming tracks and rivers. When I visited him in Brighton I was amazed that even a total amateur like me was able to control the copter and fly it without crash landing. The secret of these quadcopters is that with 4 blades they are remarkably stable in the air and this particular machine is ideal for me as it is idiot proof - if you let go of the controls it defaults to hovering in one place and it also knows exactly where it is because it ​picks up​ GPS signals from half a dozen satellites. 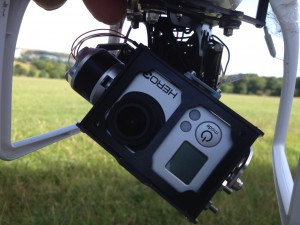 Dan has been using his drone to make films for WoodlandsTV and for giving people a better view of ​some of the​ woodlands that are for sale. He has, for example, made this film of a woodland in West Sussex: https://www.youtube.com/watch?v=9pwUMPStA3k
I wondered why the camera doesn't jerk around and what makes it point in the right direction. Dan explained how the camera direction is controlled from the hand-held console and that the camera itself, a GoPro, is mounted on a gimbal, a clever device that compensates for the drone's movements and keeps the camera steady and pointing the same way. ​This device​ has brushless motors to adjust its position and, like a smart phone, it also has an accelerometer which acts like a sophisticated spirit level for the camera. 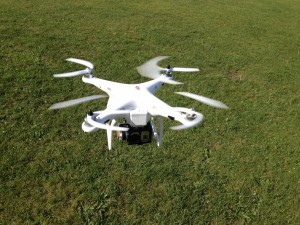 The cost of these flying machines is dropping ​steadily ​and there is now a Maplins quadcopter ​costing only £700 including a camera. Dan's quadcopter is ​a​ DJi Phantom which he bought about a year ago and together with a camera, gimbal, 3 spare battery packs and a carrying case cost him just over £1,000, so they are something to look after carefully. Each of the lithium polymer batteries gives about 7-8 minutes of flying time and they take about 20 minutes to recharge, which Dan explains should really be done inside a metal box as they is a small chance that they might catch fire. ​ Next year Dan is planning to get qualified so that he can fly these drones commercially.​

Here is some of the film we made from the quadcopter: 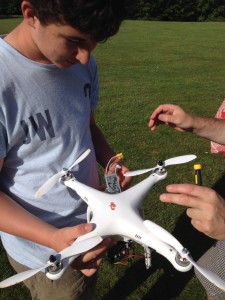 If this quadcopter weren't carrying the weight of the camera it could do exciting acrobatics but ​even when it is loaded down with significant payload it is still able to climb up to several hundred feet very ​smartly. My concern, firmly on the ground, was that it might get to a point where I couldn't ​actually ​see where ​the copter​ was in order to control it or that I wouldn't be able to see the red lights which would warn me when the battery was running low. The range of this quadcopter is almost one kilometre but you'd never normally get close to that limit, especially if you are near trees or any obstacles. Safety is controlled by law in ​several ways - ​you must get the landowner's permission to fly a drone-type device and you mustn't go to more than 400 feet high or fly within 4 miles of an airport. You are also supposed to stay at least 50 metres away from people and buildings, so for most woodland owners these ​rules ​will not stop you flying a quadcopter or ​any similar drone. There are ​some ​other practical ​factors which limit Dan's drone flying - he doesn't take it out when it's raining or when it's really windy.

Amazing! Can these be bought by anyone? Do you have to have a license to fly one privately?