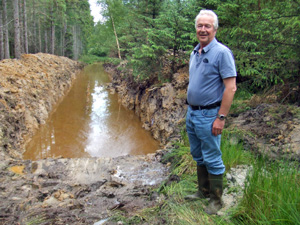 The mighty plans of men and beasts continue unabated with hiccups and head aches aplenty. Initial development, towards my utopian woodland haven, has taken its first faltering steps. A sixty metre fish pond has been excavated by Edward the Volvo digger man (is that advertising?) and to my eyes closely resembles, in all its murky watered splendour, a part of the Grand Canal in Venice, however an ex sea going friend tells me it looks more like the Suez Canal between Al Kantara and the Bitter Lakes, with trees. Each to their own, say I.

The recent rains have caused havoc with the continuing plans for this feat of civil engineering because it flooded up rapidly before I could install some piping in an unpatented, back of a cornflakes packet sketch, experimental water recirculation plan. (Sounds good eh?) On paper and according to my 1958 GCE in Physics it has to work, it says here. I do not know whose law it falls under, probably no one – yet. I have checked from Archimedes, through Pythagoras to Galileo, Boyle, Kelvin, Alexander Graham Bell and Einstein - in fact the full gambit of those scientific pioneering geniuses who were able to shout “Eureka” at some stage of their experimentations but I have come to the conclusion that no one seems to have hit on this startlingly simple idea. Of course water can run up hill, it is just a matter of applying the method correctly!

To round off a productive month of hard graft with pickaxe, shovel and wheelbarrow grading and clearing up the wood’s track way, whilst being eaten alive by mosquitoes the size of Westland helicopters, the top surface layer has now been laid in. 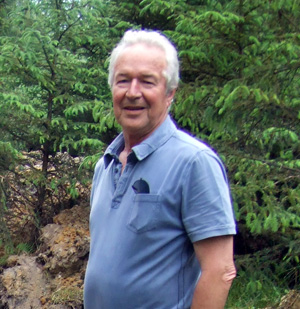 General advice made up of does and don’ts from an ex road building acquaintance, who must have thought I needed an extension to the M5, helped considerably. I am sure there are some glaring mistakes and it will probably flood and wash away or collapse on the bends but the faults will have to be dealt with as they come to light because I am now a shattered but a little fitter relic of my former self. I have lost four kilos in weight and can no longer be considered to be quite so rotund and with a semi- respectable waistline again. (That is respectable in my eyes you understand, there is still room for improvement!) This has proved to be a surprisingly satisfying by-product of being the guardian to Greenridge Wood. Weight Watchers eat your heart out!

It is now time to sit back and put the other targets on the back burner for a while and just enjoy the wood in its summer splendour, before I actually need the previously mentioned Zimmer frame or wheel chair from part 1.

A man after ny own heart. I have lived in Australia, but long to have a quiet piece of england(Scotland) to call my own. Your story may have just encouraged me to do something about about it.
John

Very nice.
Now what about the stones on the bank for sitting and thinking on, [import from Black Sea beach and get arrested by KGB, from Chantilly for racing and pretty limestone, and from your residence for old time’s sake, plus a little granite boulder pecked spherical by gritting grouse] importing frogspawn [and great crested newts]and swamp cypresses?
Where will your bee man put his bee hives?
Just a bit of sweetwater circulation should keep it nice.

I enjoyed your editorial very much. Just shows how the pioneer attitude still exists and I liked your sense of humour which gives an additional dimension and perspective to what must have been at times a very daunting task. Keep up the gud work!