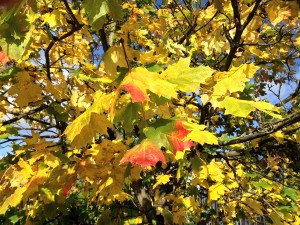 At some point during the months of Autumn,  the leaves have done their job (that of making sugars to be used in growth, the formation of new twigs and branches, forming fruits and seeds).  However, winter is not good for photosynthesis or growth; winds, low temperatures and low light intensities adversely affect a tree’s ability to make sugars. Indeed, if the leaves were retained throughout the winter, they might be regarded as a liability as they would use the the tree’s reserves (that were stored away in the Spring and Summer).  Plus, leaves would offer greater resistance to the wind and the tree would be more likely to suffer damage.  High winds are always more dangerous to a tree when it is in full leaf. 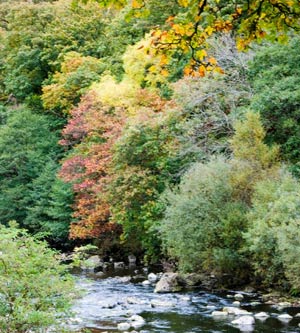 Usually, the loss of the leaves is preceded by changes in the colour of the leaves.  The green of the chlorophyll is lost and a variety of other colours come to dominate – reds, oranges and yellows. These colours are associated with other pigments, the carotenes, xanthophylls and the anthocyanins, the latter in combination with sugars give a red colouration (like that seen in an ripening apple).  As the chlorophyll disappears and the leaf stops making sugars, so changes at the base of the leaf stalk take place.  Here, the cells begin to ’round up’ and start to lose touch with each other.  The cementing  substances between the cells weakens and an abscission layer forms, so that the leaf has little or nothing securing it to the plant.  At some point the leaf falls - by virtue of its own weight or hastened by high winds or frost.   The cells of this abscission layer are ‘corky’ so that when the leaf falls, no living cells are exposed to the elements and a leaf scar is formed - protecting the tree from the entry of pathogens. 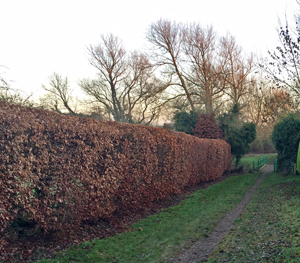 So why then do some trees, like Oak and Beech, keep their leaves?  A garden hedge of beech (see adjacent image) is a particularly good example of the retention of leaves through the winter months.  This ‘holding on’ of leaves through the winter months is known as marcescence (from the Latin, marcescere = to fade).    In trees with marcescent leaves, the corky or abscission layer is incomplete;  the leaves remain attached to the tree albeit somewhat tenuously.   Some of these shrivelled leaves ’hold on’ until the Spring when they are then dislodged by new growth.

Why some trees keep their leaves during the winter is not really known - though various hypotheses have been advanced.   However, the ‘maturity’ of the tree does seem to involved. The maturity of a tree may be defined by the 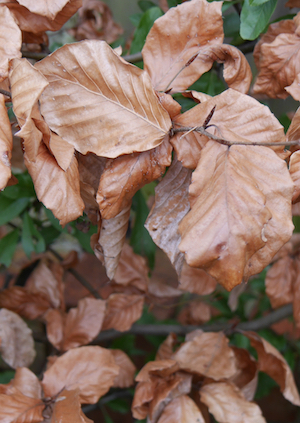 production of flowers - this may take years to decades, depending on the species and where it is growing.  Even a large and seemingly mature tree may have some branches in an immature state (particularly those low in the crown or close to the main stem).  Such branches may retain their leaves in the winter months.  The ‘juvenile parts’ of a tree may be identified if the tree is examined over the course of a year - the branches that retain leaves will not bear flowers and fruit in the following Spring.  Why juvenile trees or regions should ‘hold on’ to their leaves is not clear but it presumably has something to do with the plant growth regulators (auxins, cytokinins, gibberellins etc) that control the formation of the abscission zone.

The autumnal / winter loss of leaves from a tree may seem wasteful but leaves age and are damaged (for example, by insects and pathogens) as the year progresses; the 'discarded', old  leaves return to the soil through the activity of beetles, worms, bacteria and fungi (the detritivores and decomposers).  The various elements (e.g. carbon, nitrogen and phosphorus) are recycled.  Carbon returns to the air as carbon dioxide (to be used again in photosynthesis), nitrogen compounds will return to the soil in the form of nitrates. Rarely is anything wasted in nature.

Hi, I have a bonsai oak tree that I have grown for at least 8 years. This last summer the leaves turned brown , but are still attached. I was concerned that it has some how been killed off in the hot summer this year. I was on holiday during the hot weather so was not able to keep it watered. The leaves do seem to be secure at present.
Do you think my tree could survive this and start to grow again in the spring or should I give up on it . Is there something I can do to help the tree?

Anyone interested enough might like to check on which leaves seem to persist longest in the ‘leaf mould’ . The sweetest ones e.g. birch disappear first- apparently worms (for example, and other detritivores I am sure) have a sensible preference for the tastier and softer leaves. As time goes by, the various choices diminish and eventually the leaves which remain are tannin rich tough oak and beech.