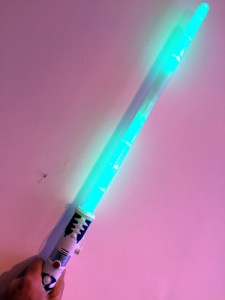 It's worth watching the latest Star Wars movie just for the woodlands scenes, but it's best to view the film in 3D.  Somewhat reminiscent of the forest scenes in the film Avatar, the characters retreat to the woodlands to escape from the endless rounds of shooting and whizzy intergalactic travel.  The first of these woodland scenes is full of ferns, mosses and creepers in an obviously deciduous woodland which turns out to be the Forest of Dean in Gloucestershire.  This is also said to be the forest that inspired JRR Tolkien's "Middle Earth" vision.  The Stars Wars heroine Rey escapes to the forest where fighters from the evil empire "First Order" don't expect her to be and even when they do start pursuing her in the undergrowth there are lots of craggy rocks and places to hide.  It feels a long way from the planet Jakku, and indeed it is - because the Jakku desert scenes were filmed in Abu Dhabi.

But woodlands play a wider role in "The Force Awakens" as they are used to symbolise peace and tranquility and a secure earth in a universe of danger and explosions.  At one point as a green planet is approached, Rey says, wide-eyed, "I didn't think there was this much green in the whole galaxy".   Much of the green is in fact the woodlands around Derwent Water and Ullswater in the Lake District where a whole slew of the filming took place. 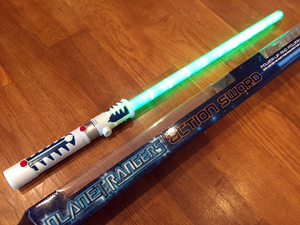 Near the end of this war between the Rebellion (goodies) and the First Order (baddies) there is the inevitable hand-to-hand combat which is set in a coniferous forest, appropriately with a fairly light dusting of snow - presumably as much of it as the Disney snow machine could be coaxed to produce.  Here, amongst the pine trees, Rey and Finn (aka FN2187) battle against Ren of the First Order using powerful lightsabers, one blue and one red (actually pink).  Most viewers will surely react by wanting to rush out and buy a lightsaber from the merchandising arm of the film company of only because they can fell a tree so effortlessly.  I hope Disney got a felling licence when they made that scene, but they may also have needed permission for the trees which are scythed down by the Rebellion's spaceship, the Millennium Falcon. 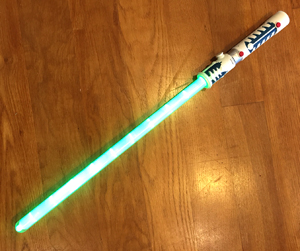 At least the injuries that occurred on the set were not forestry related - 73 year old Harrison Ford (Han) broke his leg during the filming when his ankle got caught in the hydraulic door of the Falcon spaceship and director JJ Abrams injured his back in trying to help release Ford.  All publicity for the film and its merchandise but the real highlights for forest enthusiasts are the 3D woodland scenes and aerial forest shots.