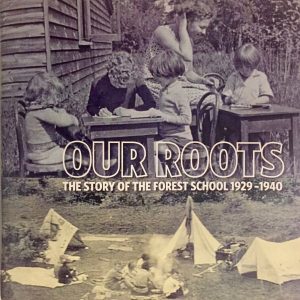 Forest School is becoming a standard part of many primary schools, often with the use of onsite woodlands and sometimes with a walk or even a minibus trip to take children into nearby woodland areas.  Our company's first experience of the growing importance of forest school was when a school in Kent decided to buy a woodland and have its pupils visit once a week, but since then we have had many experiences of families buying woods and lending them to the local school for forest school classes.  Even though the concept is now well embedded and growing, the history of 'Forest School' in the UK goes back a long way and has some slightly eyebrow-raising history.

One of the roots of the forest school movement was an actual school with that name, "The Forest School", which was established at a place called Sandy Balls near Godshill on the edge of the New Forest in 1929.  It was based on the ideas of Ernest Westlake, who also founded the oddly named "Order of Woodcraft Chivalry" (OWC) which flourishes to this day.  The first headmaster was the charismatic Cuthbert Rutter, a Cambridge graduate, who was also the nephew of Ernest Westlake.  Actually, he was also the only headmaster because when the war got going in 1940 the school had to be closed down.  In its 10 years of existence it experimented with some radical ideas and as Westlake said, "the ultimate aim is to develop as many as possible of the child's instincts, faculties and potentialities as are not antagonistic to the society in which he lives."  The school adopted the OWC system of tests and trials, so that, for example the "Tracker Tree" had to be climbed in order for a child to progress into the Tracker group and there were other tests like the "lone vigil test" in which pupils spent a night in the woods together and wrote an account of their experience in order to advance into an older group.  Other tests were swimming across a lake holding a lighted candle in one's mouth, and silence tests where you had to remain silent for a whole day.  Camping was a central feature of The Forest School as it is of the OWC - the 1931 prospectus stated that, "camping, when the weather is suitable, is a normal part of the school routine."  Whether Michael Gove and recent educationalists would have approved of the ethos is debatable, but the school was certainly successful and obviously made a lasting impression on the pupils.

The original Forest School prospectus made clear that it did not "set itself to prepare every child for some academic examination.  The curriculum is therefore broad and elastic, combining routine with freedom."  In science, nature study was central, in languages conversational classes were with "a linguistic expert in at least 10 modern languages", arts comprised drawing, painting and modelling for all.  "Needlecraft is taught to all, boys and girls alike, who are required to help in making their own school uniforms."  "Dancing, singing, acting and dramatic work and instrumental music are regarded by the Forest School as essential means for self expression."  Gardening and simpler forms of farming and home-related crafts were undertaken by all the children.  Of course not all schools today have the benefit of 100 acres of woodland, as the Forest School did, and by necessity it was a private school and costing about 30 guineas per term (equivalent to about £1,800 in today's money). Discounts were available for siblings, payment of a year in advance and for parents who were members of the Order of Woodcraft Chivalry.

A central idea of the Forest School was that a child should be encouraged to ask endless questions of "friendly and well-informed elders" which is presumably also the basis of forest school today.  As with today's forest schools,  safety was a primary concern and they had their own version of the three Rs - three things you were not allowed to do - to go on the Road, go to the River by yourself or go on the Roof.  Other elements of that early school have also been adopted by today's forest school movement - learning knife skills, learning how to light a fire, and following trails.  There was also a great emphasis on social skills - leadership, team work and fitting into a hierarchy of children.

The Forest School at Godshill was part of a wider movement in the inter-war years that was a reaction against too much classwork and formal lessons.  Other progressive new schools at the time with similar ideas were Summerhill (1921), Darlington (1925) and Kilquhanity (1940).  These schools wanted to make the curriculum more useful and relevant, were child-centred and they all placed a high value on learning by doing.  One can see why they are seen as forerunners of the current forest school movement.

I feel that getting our two children to go to FSC was one of the best things that we, as parents, have done for them. It has helped them to become adventurous and compassionate people and I thoroughly recommend it to you all.