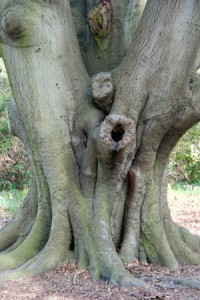 In recent times, the terms veteran tree or ancient tree have come into use. So what is a veteran?A veteran tree may be defined by a combination of factors:

Age or size by itself does not define veteran status. These factors have to be viewed in relation to typical values for the particular species of tree: an one hundred year old birch or willow might count as a veteran but an one hundred year old oak or yew would be an adolesecent! A tree should show some of the following features to be termed a veteran: 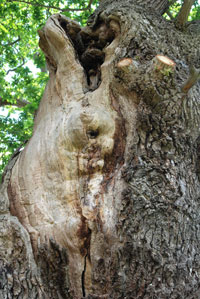 Why are these trees important to us? Well, there are a number of reasons:

But veterans or ancient trees are often threatened. They may be felled for timber or for safety reasons (heart rot fungi etc) or simply to tidy up woodland. The management of adjacent land may pose a threat through ploughing and use of various agricultural sprays). Sometimes, disease strikes (as in the case of Dutch Elm Disease) or damage to the bark by people or livestock may allow pathogens to enter. Many older trees were lost in the great storm of 1987 (and 1990).

In recent times, the UK Biodiversity Action plan has recognised the importance of these mature and interesting trees and their role in managed woodlands, hedgerows and the countryside in general.

For professional help with dealing with veteran or ancient trees: