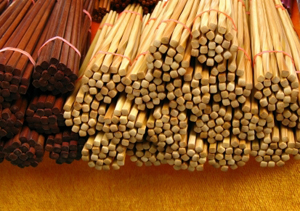 Recently a friend of mine exclaimed that China gets through 80 billion disposable chopsticks a year.  This is enough to fill Tiananmen Square three times over.  With a population of 1.4 billion, the demand for these utensils is eating away at China’s forests, at a staggering rate.  China's natural forest resources are extremely limited (139th in the world); despite this, 3.8 million trees a year are being cut down - that is, about 100 acres every 24 hours.

This deforestation is having knock-on environmental effects, causing landslides, flooding and leading to climate change.  One of the contributors to forest over-exploitation is the demand for disposable chopsticks.  The situation is not looking any more promising as the uptake for Asian cuisine is becoming more common across the globe.

Chopsticks have been part of China’s culinary history for the last 4000 years. In 2100 BC,  the founder of the Xia dynasty, Da Yu, first used chopsticks to eat his food. Since then, the merits of chopsticks compared to knives and forks have frequently been discussed. Comedian Jerry Seinfeld commented that 'parting the Chinese from their chopsticks is no mean feat'. However, it is beginning to look like the debate will end in an environmentally-friendly way.

For example, action has been taken to raise awareness of the effects of over-production and not recycling disposable chopsticks.  In 2006, authorities in China levied a 5% tax on disposable chopsticks.  Encouragingly the chairman of the Jilin Forestry Industry Group, Bo Guangxin, is aware of some of the issues, arguing that 'we must change our consumption habits and encourage people to carry their own tableware'. The most prominent recent 'chopsticks awareness' campaign has been Greenpeace’s 2010 ‘Turning Chopsticks into Trees’.  This campaign erected four trees that were 16 feet tall, created using 84,000 used chopsticks - visit their site to see 'the trees'.  Re-usable chopsticks were also handed out to passers by in order to encourage more sustainable food consumption.

So next time you find yourself feeling guilty about asking the waitress in ‘Wagamama’ or ‘Imperial City’ for a fork, instead of the using the supplied chopsticks, rest assured you are really doing the right thing.