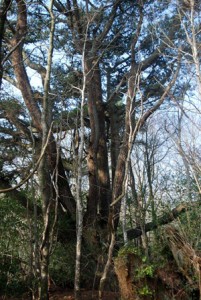 Monterey Pine or Radiata Pine (Pinus radiata) is found naturally in the coastal area around Monterey in California.  There, it is under threat from Pine Pitch Canker (a fungal disease), which makes them liable to attack by bark beetles.  Monterey pine is to be found growing in milder parts of the UK (where it grows faster than in its native habitat), and in coastal areas as it is resistant to salt spray.

The pine is extensively and intensively used in forestry, especially in countries like New Zealand (like the Kaingaroa Forest on the North Island).  The monterey pine can be used for erosion control on steep slopes - as it has a widespread and fast growing root system

The growth form of the tree is conic at first, but as the tree ages it becomes dome shaped with heavily, twisted branches.

In California, the height is usually between 50 and 100 ft but it can grow much taller under optimal conditions.  The bark is notably fissured (see image), grey in colour though it can assume a purple black hue with time . 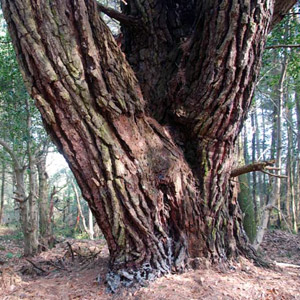 The leaves / needles are bright green, and arranged in threes.  They are quite long (3 to 6 inches) and slender.  The cones are also quite big, sometimes described as ‘fist sized’ – they are brown, long and egg shaped with a prickle associated with each scale.

The cones are also described as serotinous – that is to say, they open up after a forest fire to release the seeds onto the forest floor.  The cone provides protection from the heat of fire together with a mechanism for seed release. In some cones, this involves a resin that 'seals' the cone scales shut, but which 'melts' when heated.  The 'ash bed' present after a fire means that there is an increase in the nutrients in soil and surface layers available to seeds and the process of germination.

Thanks to Dick White (woodlands.co.uk agent, Cornwall and West Devon) for photos 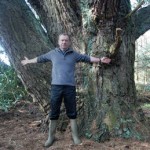 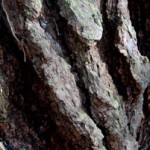 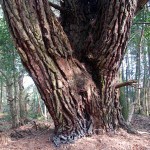 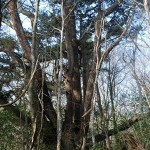 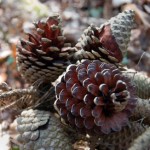 Do not plant one of these monsters in a garden!
We inherited one 40/50 years old in our current garden and it is the bane of our lives. We have to rake up and dispose of huge piles of needles and cones all year round. It sucks all the nutrients out of the ground under it’s far-spreading roots. Huge chunks of branch with cones attached fall off in windy weather – luckily not killed one of us yet!

We have this tree growing in our garden. Upper Denby, West Yorkshire.

Seeds can be obtained from Chiltern Seeds :
https://www.chilternseeds.co.uk/item_1013_pinus_radiata_seeds

We have just purchased a property with land right by the sea and wish to plant one or two of these tree’s but haven’t been successful in finding them on any garden sites.

Is there a specialist nursery anyone could recommend please or if not perhaps someone who may have a tree with cones ?

I live in a wooded valley in Cornwall and was saddened when several of these beautiful trees were cut down.

So I germinated some seeds from one that I planted in my garden 18 years ago. Germination was surprisingly easy – using some cones that had been placed beside my woodburner all winter I shook the seeds out of them onto some damp compost, left in warm place for 2-3 weeks and, hey presto, 24 baby trees!

Chris, you might be interested to know that my husband and I have been given some logs to burn by a tree cutter. Among them a large branch with huge closed cones (until the sun hit them, when they opened). We had never seen the like, so researched online, to be told it was probably Pinus radiata. We live in Kent.

I am a PhD student comparing the supply chain impacts of different construction materials. Radiata Pine is one of them. I am looking for the source of radiata pine which are used in UK. Are they are grown in Uk or imported from somewhere? From Europe? Wondering whether you are having any information about it?

Nice article Chris and one of my favourite trees. My ambition has been to visit Monterey, along the Western coast of America to see these magnificent trees in their native land. Each tree is unique in form but does cause some concern here in the U.K. where they grow in the urban environment.

Trees are amazing! I have never seen pics like these. Thanks for the article.

Do not know but it has been planted in many, many places

Is this tree found on the island of Madiera? Some of them there have BIG cones and I am curious. Nice article.