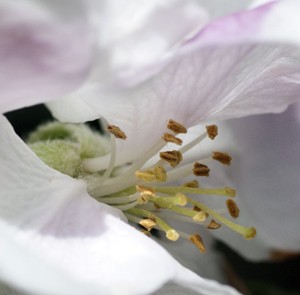 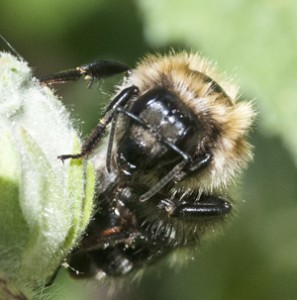 The flowers that had been visited by the ‘exposed’ bumblebees developed apples that were later harvested; these were found to contain fewer seeds (some 36% less) than those fruits formed from flowers pollinated by the ‘normal’ bumblebees.   Thus, the process of pollination (pollen transfer from anthers to stigmas) was less effective when the bumblebees were exposed to neonicotinoids.

These results are important as they indicate that the neonicotinoids can significantly affect the bumblebees’ ability to pollinate important crops - and presumably other plants.

There has also been a report on the effect of the neonicotinoids on butterflies.  As neonicotinoids can remain in the environment, they can be absorbed by wild flowers - for example, those around the edges of fields.   These plants provide food for caterpillars (munching on the leaves) and nectar for the adult butterflies.  Now several species that live on farmland have shown population declines that may be associated with the rising use of the ‘nerve agent’ pesticides - for example, small tortoiseshells, small skippers and wall butterflies.

Neonicotinoids were banned for use on flowering crops by the EU for three years in 2013, but the UK government partially lifted the ban last year for use on oilseed rape in some areas.

I read numerous studies like this two years ago and respected scientists then claimed that pesticides don’t have a “significant” effect on pollinating bees. I really don’t think anyone believed that claim. It’s easy to imagine why giant food producers would want to keep the right to use pesticides, as this increases their products and thus their revenue. I believe if people knew the truth about the dangers of chemical pest control on crops, the pesticide residue and the terrifying prospect of a future without bees, they would all vote for Integrated Pest Management and biological pest control to take the lead.