Hockney, trees and woodlands. ~ by Margaret 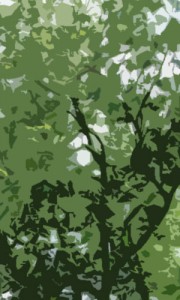 Walking into the David Hockney exhibition at the RA was akin to entering a forest. Like stately trees, the paintings towered above my head, and cohorts of them rallied behind, receding far into the distance. This is not a showing of a series of individual paintings so much as one continuous stream of creative art.  With a lifetime’s experience of recording visual images of the world around him, David Hockney has spent the past few years creating a composite image  of the Yorkshire landscape.

A great part of the countryside is covered in  trees and woodland. He catches the same scene at different seasons, showing not only the seasonal changes of buds breaking and leaves falling, but also the variations of light. These are so striking that it is sometimes hard to believe that he has sat in exactly the same place to paint them.

Ah! The same place! But, argues Hockney, we do not view the world from the same place. Whether driving down a highway or wandering slowly through a wood, we see something  slightly different every second, and this shapes the image that forms in our minds. He has experimented with producing this “3-D” image on canvas, with more or less success, judge for yourself. He was not satisfied with these, because he points out there is an element of time involved in seeing in 3D. His most convincing images were in fact photographic, slotting together squares of film taken by nine cameras mounted on a jeep and moving slowly along. With no special glasses and a flat screen in front of me I was completely drawn into the feeling of actually being there under the trees. Must be seen to be believed!

Another aspect of the exhibition which could be of great interest to some woodland lovers, was his experimenting with making paintings on an i-pad – yes, really. There were dozens of examples, and while they did not have any 3-D resonance, they were very satisfying paintings, of which any layman would have been proud. The most convenient way of producing painting he has ever known, declares Hockney. “I don’t need to set up a canvas, get out tubes of paint and brushes and so forth. I just just take out my i-pad, arrange about five colours on its palette, and set to work.” The teenager who was with us was so inspired that when he came home he immediately proceeded to create his own Hockney masterpieces on the iPad using a free app called Tinklerpaint (??) and his finger. Results? Quite impressive, really. I think I’ll have a go.

By the way, the app that Hockney uses on his iPad is called Brushes and it costs about £5.