You are here: Home > Blog > Flora & Fauna > A problem with mistletoe ?

A problem with mistletoe ? ~ by Lewis 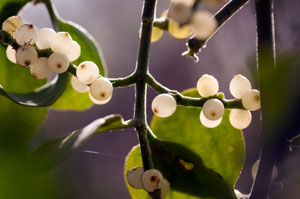 When you look around this week, you might see suspended from the ceiling or a light fitment - a rather sad and shrivelled piece of mistletoe.  Mistletoe is well known for its connection to Christmas, in particular for the custom of “kissing underneath the mistletoe”.  The mistletoe has separate male and female plants; it is DIOECIOUS.  It follows that the male plants will not produce berries and they have no commercial value - as they do not yield berry-laden sprigs for Christmas decorations.  This use of mistletoe may be rooted in festive legends of 'fertility and life giving powers'. 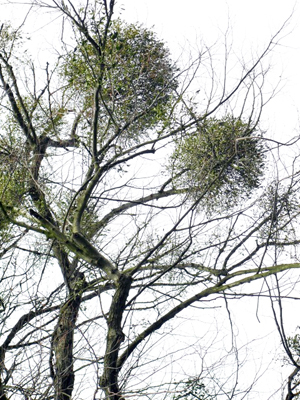 However, botanically speaking, it may be regarded as a slightly ‘sinister’ plant as it is a parasite, albeit a partial one (a hemiparasite).  It grows and photosynthesises on trees but it infiltrates the vascular system (the xylem tissue) of the host tree - taking water and minerals from it.   As mistletoe taps directly into the water conducting tissue of the host tree, it does not need to regulate its own water loss and if a tree has several clumps of mistletoe (see image) and as the mistletoe is evergreen, this can lead to water stress in the host.  The seeds are mainly spread by birds

There are three sub-species of Mistletoe (Viscum album) :-

In some parts of Europe, the spread of Mistletoe is affecting economically valuable stands of trees.  It has been a problem In Berlin since 2006 /7 when a significant increase in the occurrence and distribution of mistletoe was noted - particularly on birch, poplar, linden (lime),  and maple.  Control of mistletoe is difficult as it involves the physical removal of the plant from the crown of trees - this is time consuming and involves arborists. 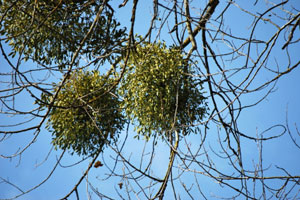 Research workers at the Potsdam Institute for Climate Impact Research have been modelling the effect of mistletoe growth on timber yield of Scots Pine (Pinus sylvestris).  They used a 'forest growth model' to simulate the impact of the mistletoe on the water and carbon fluxes of a forest stand near Berlin .  They also took actual measurements of biomass / growth in the canopies of the pine trees.  The modelling suggested that growth was reduced by more than 25%,  when trees had a heavy growth of mistletoe.  This correlated well with the field measurements of the impact of mistletoe on the growth of the Scots Pine.

Water and minerals pass to the mistletoe as well as various organic compounds, reducing the growth of the pine trees and this may become even more significant with climate change - due to the effects of  water stress.  Clearly unchecked,  mistletoe can have a significant effect on forestry and timber production. 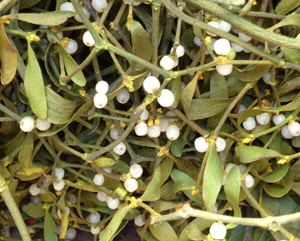 To control the spread of Mistletoe in cities like Berlin, it may be necessary to change the type of trees being planted *.

An alternative approach to the control of Mistletoe might be the use of biological control.  It is known that a leaf spot fungus (Phaeobotryosphaeria visci) can infect its branches, leaves and berries and completely destroy it.  It is possible that this might be a suitable candidate for biological control.

On a more positive note, the berries provides winter food for various birds and the plants support a number of specialist insects, for example the mistletoe marble moth and the 'kiss me slow weevil'. 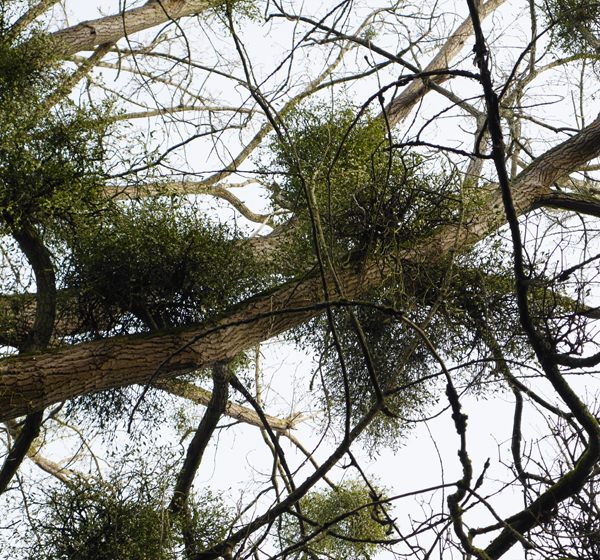 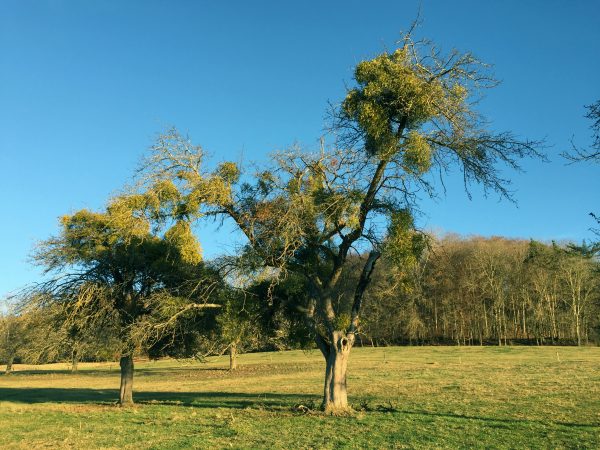 Will look at our local mistletoe with new insights – had no idea that there were sub species and was not aware that Berlin had such a problem.