A sting in the tale? 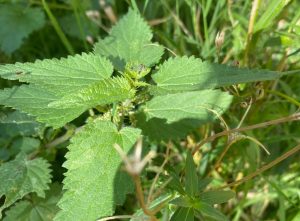 Stinging nettles (Urtica dioica) are widespread across the UK.   They are found nearly everywhere; in woodlands, hedgerows, gardens and on disturbed ground. Nettles have been found in and around human settlements since the earliest of times; they probably formed part of the diet in Stone Age times.  Nettles also provided fibre for clothing.  A piece of nettle cloth has been found in Denmark's richest known Bronze Age burial mound (Lusehøj). It is associated with the burial of a rich and powerful man - after the burning of his body, his bones were wrapped in a cloth made from stinging nettles and then placed in a bronze container.

Stinging nettle pollen is often to be found in soil sample cores, suggesting it is one of our native plants though human activity and movement may helped it to extend its range.  Nettles can tolerate a wide variety of soil conditions, though they seem to like moisture, and soils rich in nitrate and phosphate. In favourable conditions, they can grow to a metre or more in height. There are patches of stinging nettles that mark phosphate-rich debris from abandoned villages and sites of human occupation from more than 1500 years ago. Nettles have the potential to grow and expand in woodlands, perhaps aided and abetted by the increasing levels of eutrophication (nitrate / phosphate enrichment from air borne pollution).  Indeed, they can become 'botanical thugs' overwhelming other members of the ground flora  / herb layer. 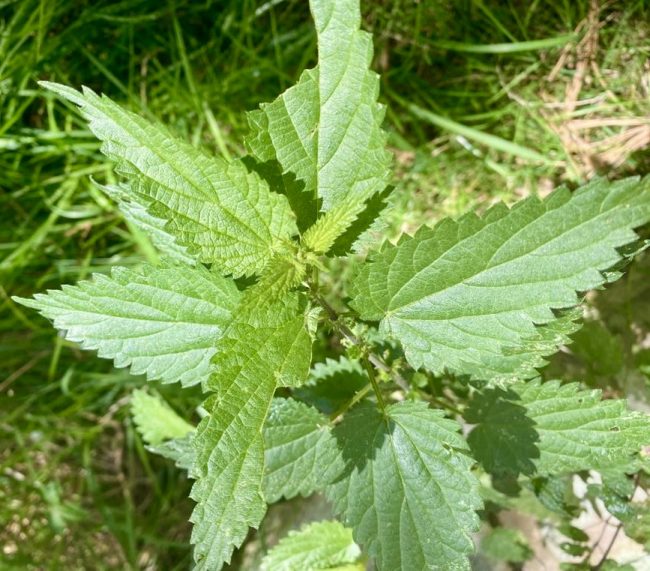 Nettles have ‘heart-shaped” leaves (with serrated edges) that are armed with stinging structures .   The nettle is probably best known because its ability to sting.  These stinging structures were first described in detail back in the seventeenth century by Robert Hooke, in his Micrographia.  Hooke noted the stinging points comprised two parts; a bristle-like 'syringe-pipe' with a cucumber-like 'little bagg' at the base. He speculated the base contained a 'corrosive penetrant liquor' which was released when the 'syringe-pipe' was broken. 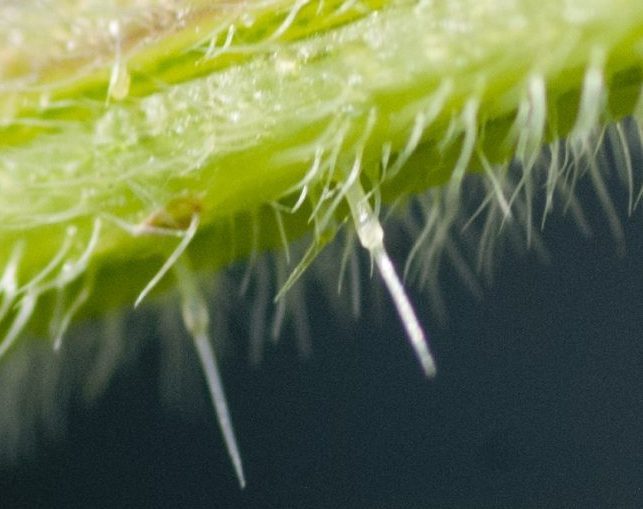 The trichomes on a nettle stem

The hair-like structures are called trichomes and they do have hollow tubes. Each tube (or trichome) and its swollen base is filled with a 'cocktail' of chemicals, (including histamine, serotonin, formic acid and acetylcholine). The tip of the tube is easily broken, leaving a sharp point that can penetrate the skin delivering the 'cocktail' which gives the characteristic rash / inflammation of a nettle sting [NB : there is a video on YouTube that shows this mechanism here.  There is also a simple investigation that you can do regarding these ‘hairs’ and their contents, again on YouTube - here.] Fortunately, nettles are often found to have dock leaves growing nearby, which, if crushed and rubbed where you have been stung by the nettle, may take away the pain.  Some further information on the chemistry of the 'venom' in the nettles can be found here. 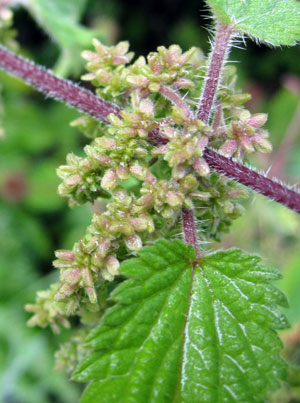 Only male or female flowers are found on any one nettle plant, that is, there are separate male and female plants. The male and female stinging nettles have tiny, wind-pollinated flowers arranged into catkin-like structures. Each male flower contains four tightly-packed stamens. which ‘pop out’ when the bud opens, releasing the pollen.  According to Mabberley's Plant Book, the anthers are bent down whilst in the flower buds but when ripe, they spring upwards and release a cloud of smooth pollen to be carried away on the wind. The small grains of stinging nettle pollen are commonly found in the air in late summer.

Nettles can produce large numbers of seeds, it has been estimated that plants growing in the shade can produce between 500 to 5000 seeds but those in full sun may produce up to 20,000 seeds.  Whilst nettles do reproduce sexually, they can also reproduce vegetatively by means of underground stems [rhizomes].

Stinging nettles are important sources of food for a number of caterpillars, such as those of the peacock, small tortoiseshell, red admiral and comma butterflies. Indeed, around one hundred insect species benefit from the plants. Nettles are a food source not only for various butterfly and moth caterpillars, but others benefit indirectly.  For example, ladybirds consume the aphids that thrive on the plants and nettle seeds are an important food source for birds.

Over the centuries, the stinging nettle has had many possible uses ascribed to it, from nettle tea (see our first blog some 13 years ago) to cloth and dye making; indeed there is some renewed interest in the nettle for fibre.  Some 101 uses for stinging nettles are offered in Piers Warren's book with that name.   Perhaps one of the stranger things about nettles is that there have even been nettle-eating competitions.

You’ve forgotten Urtica urens. It feels like lots of needles piercing your skin, but if the stinging ends it is warm and kind of tickeling sensation. I’ve heard some people rub or whip them on their back against rheuma….
I just do this because it feels relaxing, im not kidding. For me it’s kind of acupuncture for free

Seems the sting of the stinging nettles has been around for a long, long time : since the Eocene period :
https://bsapubs.onlinelibrary.wiley.com/doi/10.1002/ajb2.1548

Loved this article on the good old stinging nettle , thank you