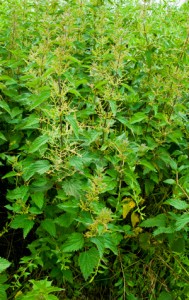 Stinging or common nettles (Urtica dioica) are widespread across the UK, as can been on the BSBI map which shows the distribution of the nettle across the country.  They can be found in woodlands, hedgerows, gardens and disturbed ground. They tolerate a wide variety of soil conditions, though they seem to like moisture,  and soils rich in nitrate and phosphate; and can grow to a height of a metre or more.

The plants are dioecious, that is, only male or female flowers are found on one plant.  According to Mabberley's Plant Book, the anthers are bent down whilst in the flower buds but when ripe, they spring upwards and release a cloud of smooth pollen to be carried away on the wind.  The plants can produce large quantities of seeds, it has been estimated that plants growing in the shade can produce between 500 to 5000 seeds, whereas those in full sun may produce up to 20,000 seeds.  Nettles can also reproduce vegetatively by means of their underground stems rhizomes.

The nettle is probably best known because its ability to sting.On the surface of the nettle leaf are many hair-like structures.  These hairs are, in fact, hollow tubes (to see them in detail visit http://www.arkive.org/common-nettle/urtica-dioica/video-10a.html?offset=0px).  Each tube (or trichome) and its swollen base is 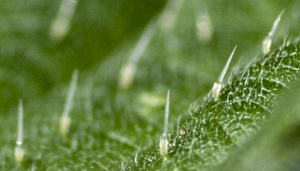 filled with a cocktail of chemicals, which includes histamine, serotonin, formic acid and acetylcholine.  The tip of the tube is easily broken, leaving a sharp point that can penetrate the skin delivering the cocktail which gives the characteristic rash of a nettle sting. It may be that the stinging nettle arose by a doubling of the chromosome number of a stingless form of nettle.

The stinging nettle has had many possible uses ascribed to it, from nettle tea (see the woodland blog) to cloth making; indeed there is some renewed interest in the nettle for fibre. 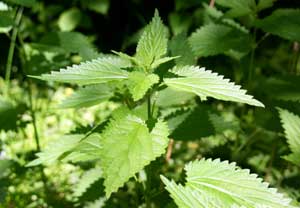 […] and roadsides is thought by some to encourage ‘nitrophiles’ or nitrophytes – plants, like nettles, that can use and exploit a nitrate-rich environment to the virtual exclusion of […]