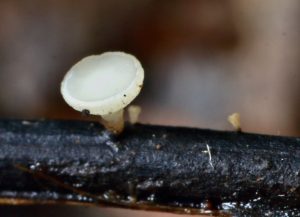 June is the month when I’ve tended to find the first primary evidence of Hymenoscyphus fraxineus, the ascomycetes fungus responsible for the dreaded Ash Dieback. By this I mean that the while the presence of the disease is manifest all year round in terms of the sight of dead or dying ash trees, this is the time when one can first see the tiny ascocarp fruiting bodies responsible for spreading the spores.

Hunt around in the debris at the base of an afflicted tree, and one can find these miniscule cream-coloured goblet-shaped ascocarps on the blackened fallen petioles and rachises of the previous year’s growth; the stems and stalks that make up the recognisable ‘pinnate’ leaf form of this species, with the blackening itself symptomatic of the presence of this destructive pathogen. The timing is interesting in that, with ash one of the last trees in our wooded environments to come into leaf, these ascocarps first begin to appear at a time when all good healthy trees should be in full leaf, shooting their spores (more specifically ‘ascospores’) into the air where they infect their host, unimpeded by the early plants of the woodland understory such as anemones, arums and bluebells that have by now died back for another year. The infection becomes evident on the tree itself with the blackening and wilting of leaves and shoots from July to September (Chalara fraxinea was the name for this separate asexual stage, and hence, before the link to the H. fraxineus was discovered, the name Chalara Ash Dieback took hold). 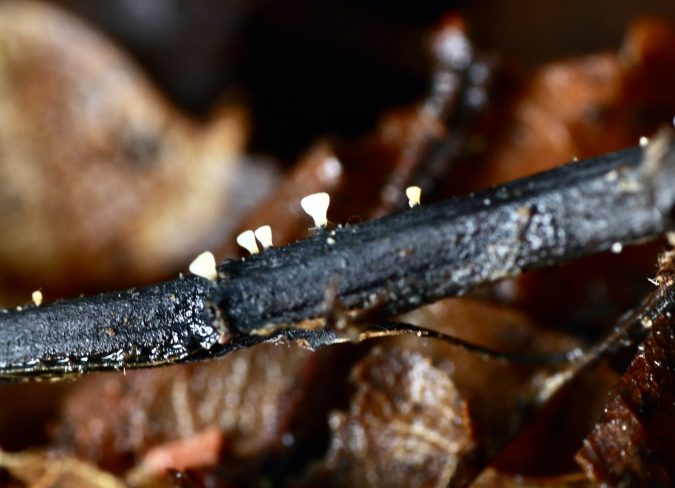 I covered Ash Dieback in some detail a few ago, but for this months Fungi Focus, I want to discuss a few small lookalike species – the term discomycetes is used to describe the cup-shaped ascomycetes – that shouldn’t be such cause for alarm. The ascomycetes can be a horrible group when it comes to identification, with at least double the amount of species worldwide than the other major phylum of fungi, the basidiomycetes, and a scant few of them baring common names. Going by visible features alone, it is difficult enough to pinpoint down to genus level, yet alone species, with close microscopic scrutiny necessary to go any further.

A case in point is Hymenoscyphus albidus, whose ascocarps look identical to H. fraxineus to the naked eye: Both grow exclusively on ash and both have the same blackening effect on the fallen petioles on which they grow. It is for this reason that H. fraxineus has also gone under the synonym H. pseudoalbinus. The only difference between this native fungus and the invasive interloper believed to have arrived from Asia, aside from the fact that it doesn’t kill its host, is that H. albidus does not possess hook-like “Croziers” at the base of its asci (where the spores are produced) – something that can only be ascertained microscopically. 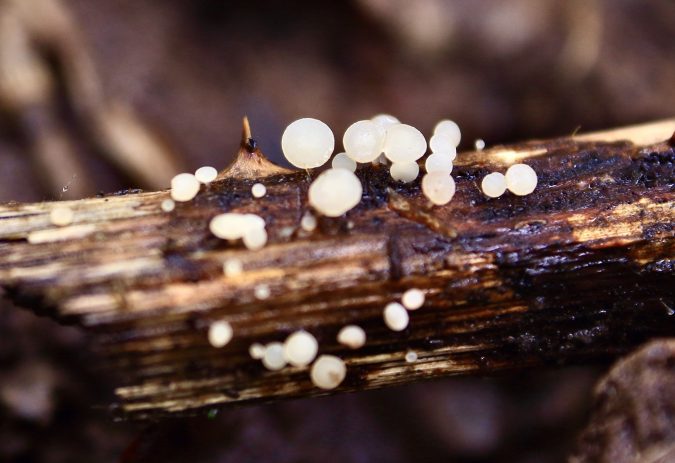 The related and near identical looking Hymenoscyphus scutula, fruiting on a dead bramble stem.

I don’t wish to blind the reader with science here, but one take home point is that if you do find tiny nail-shaped ascocarps on blackened fraxineus (ash) debris, it doesn’t necessarily spell doom for your local ash population – it might well be this harmless indigenous species. Another thing to consider is that the Ash Dieback fungus might not only be laying waste to our native ash population, but also outcompeting H. albidus in the process, thus another species falls under threat, albeit a miniscule fungi that is not quite so cherished as our ash trees and indeed is barely noticed by most of us. How many people are scouring the UK to estimate the ratio of H. albidus to H. fraxineus at the moment? Probably less than a handful, if any, I’d say.

There are 155 species in the Hymenoscyphus genus according to Wikipedia, but there are probably many many more. Even the dozen or so listed in Peter Thompson’s Ascomycetes in Colour (2013) and Læssøe and Petersen’s Fungi of Temperate Europe (2019) look so similar as to make the eyes water. Some can be identified by their host – they might grow on leaves of specific plants, dead stems of herbaceous plants, or nuts and acorns – although never with total certainty. For example, I found similar tiny cream ascocarps growing on a dead blackberry stem. They seemed to fit the description of Hymenoscyphus scutula. The spores matched too, but even then, I couldn’t be 100% sure. 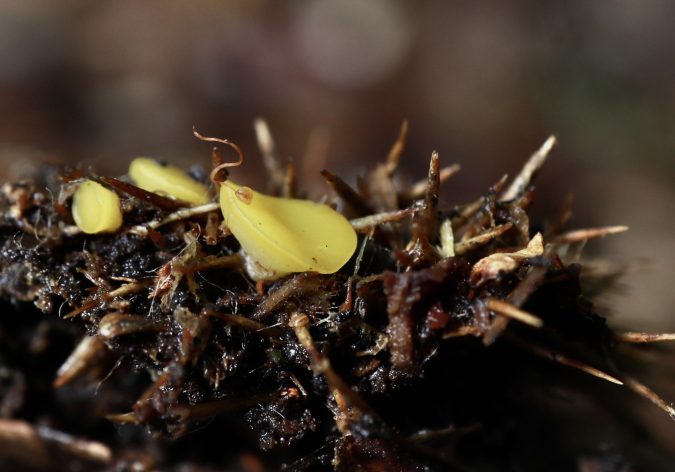 These yellow discomycetes growing on a chestnut husk are probable Hymenoscyphus serotinus, although one can never be certain without checking under the microscope

Some are slightly more notable in the colour department. The small yellow cups I found growing on a chestnut husk could have been H. seritonus, or maybe H. monticola, or maybe something different entirely. I wasn’t going to bash my brains out trying to get any further in such cases, and nor should you. This is very very advanced specialist stuff. (For the record, as well as looking at spore shapes and sizes, the serious “ascomycetologist” would look at features such as the lengths of the asci and the ‘paraphyses’, the sterile hair-like filaments also contained as support structures within the fruit bodies).

Anyway, lets move on to simpler things, namely two species of discomycetes that look superficially rather similar to the Ash Dieback fungi but are much easier to distinguish. These are Spring Pins (Cudoniella clavus) and Oak Pins (Cudoniella acicularis). One difference that can be noted with these and the Hymenoscyphus species is that the hymenium, the upward facing fertile surface in which the asci are embedded and release their spores from, is convex than concave – more dome-shaped than cup-shaped, although sometimes flatter. The appearance of both of these are of little nails or pins, as spelled out in the ‘clavus’ (for ‘nail’) part of the Latin name for Spring Pins. 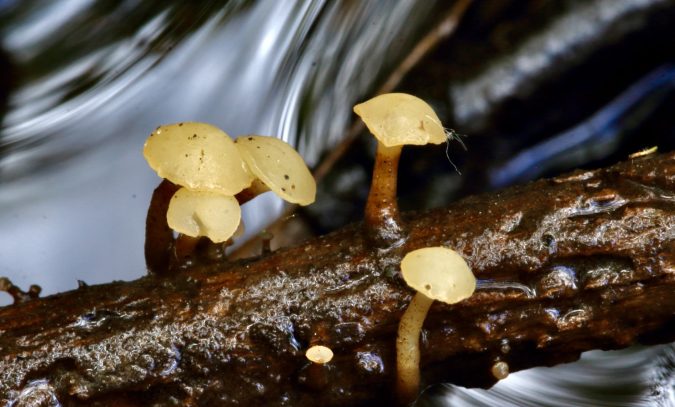 Spring Pins (Cudoniella clavus), can be found growing twigs and other deciduous litter in freshwater environments..

Spring Pins, as the name suggests, appear from April to July, and usually in great abundance. They are not limited to ash trees anyway, but are found on any deciduous litter and dead wood in wet habitats; the ones depicted here were growing on fallen twigs in a ditch, a typical environment as they often appear in clean still or flowing freshwater habitats.

They are creamy white to yellowish and average around 4mm in diameter, getting up to 8mm according to Thompson, so do appear significantly larger than H. fraxineus. They are longer stemmed too, on average, and have a slightly gelatinous although not quite translucent appearance. This combination of size, shape and habitat should make this relatively widespread fungus not too challenging to identify. 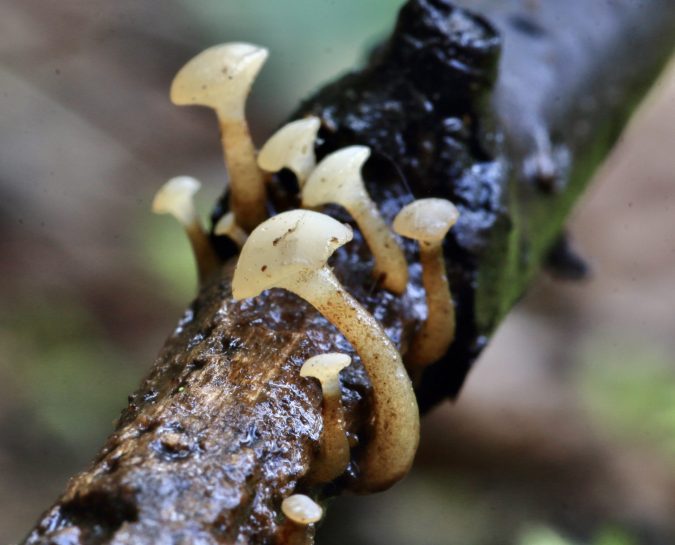 Long-stemmed, gelatinous, with dome-shaped caps and slightly larger in size, Spring Pins are easy to distinguish from Hymenoscyphus species.

Oak Pins are also common. These are much smaller, with the markedly dome-shaped caps just 1-4mm in diameter, the margins slightly in-rolled so that from above they look like tiny gilled mushrooms such as the smallest mycena species – although a look underneath with a hand lens will clear up any doubt. These are much whiter than the other species discussed thus far, although develop black and brownish spots as they age.

One notable aspect to Oak Pins is that if one looks really closely, one can see that they are slightly hairy, particularly on the stems. But their substrate, not to mention their sheer proliferation across it, should be the real clincher for ID purposes. They almost exclusively appear on very old well-rotted oak stumps, and later in the year too – from August throughout the winter into March, although with the British climate as unpredictable as it is, quite possibly outside of these months. 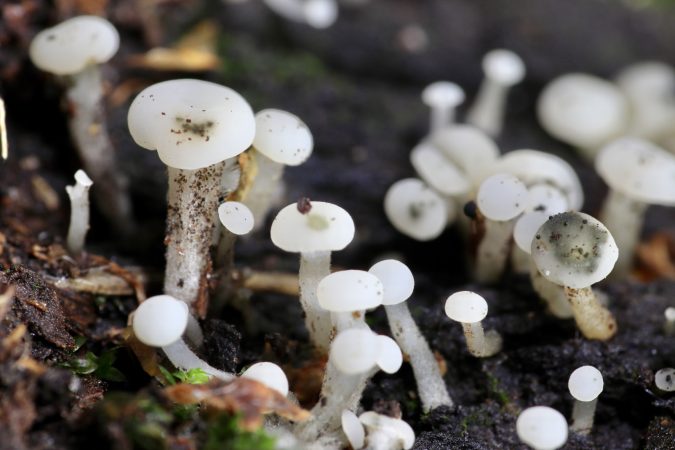 June is hardly considered the best time to be out looking for fungi. These examples should show that there is still plenty about during the early Summer months, but many species are very small, very obscure and often very difficult to identify. This post, I hope should go some way to rectifying this final problem for some of them.  And if you do find what you suspect to be Hymenoscyphus fraxineus, don’t forget to report it. Happy hunting! 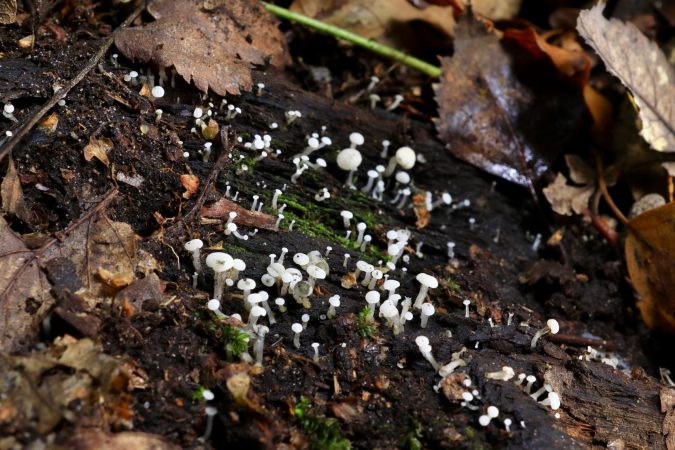 A proliferation of Oak Pins across a rotting stump.