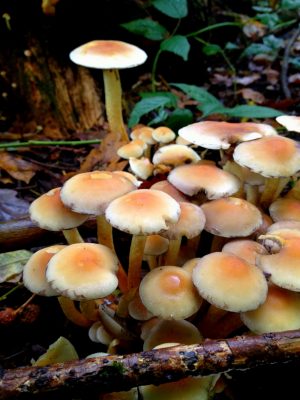 Fifty shades of brown, these are the hues in which we tend to imagine our Autumns, but it struck me while wood-wandering one sunny day recently that we are still just within that transitional period of the year, around the equinox, when yellows and oranges stand out brighter than ever within the forest colour palette. As we ease into October, the woods are positively bursting with Ochre russulas (Russula ochroleuca), Honey fungus (Armillaria mellea) and Laughing Gyms (Gymnopilus junonius) and there is also still a good chance of crossing paths with the standout egg-yolk smears of Fuligo septica, or the Dog Vomit slime mould .

And so as UK Fungus Day returns on 6 October to shine its annual light on what for so many is still a mysterious world, I thought I would choose for this month’s Monthly Mushroom a species that is as common as dirt and so regularly spotted due to its glaring yellow hues that it seems impossible to imagine heading out into any wooded area at this time of year without coming across them: Hypholoma fasciculare, or the Sulphur Tuft.

The English common name relates fairly obviously to the colour, while the “tufts” and the fasciculare part of the Latin name stem from the fact that it flourishes in dense clumps. According to Pat O'Reilly’s entry on the species on the First Nature website , it “comes from the Latin word fasces, a bundle of rods bound around an axe-head used by magistrates in ancient Roman as a symbol of authority and power. Fascism comes from the same source, implying a small group (or bundle) with imposed and centralised authority and power.” 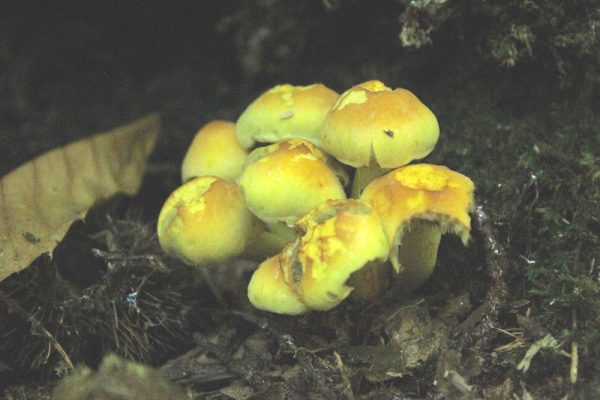 Fitting then that while these ubiquitous cap fungi may look seductive, they are actually rather noxious to humans, although slugs and insects seem to like them. There is not a source out there that doesn’t list its consumption as leading to gastric upsets, in the form of the full Monty of stomach pains, vomiting and diarrhoea, sometimes accompanied by convulsions, impaired vision and paralysis, and there have even been a number of reported fatalities. Helmut and Renate Grunert’s Field Guide to Mushrooms of Britain and Europe (1991) states that “recent research has shown that it contains poisons which are also to be found in Amanita phalloides (Death Cap)”. In fact, one of the key rationales for choosing the Sulphur Tuft for this Monthly Mushroom focus is explicitly to warn people off from so much as even contemplating sampling this most commonplace of woodland species. 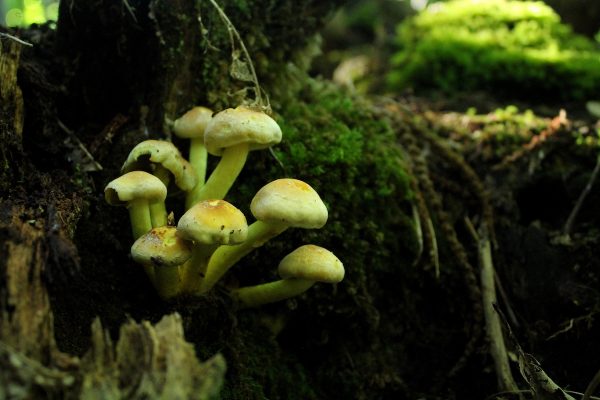 Sulphur Tufts possess a number of other distinguishing features aside from the fact that they are lurid yellow and are found sprouting abundantly, often in dense clusters, from stumps, logs and the dead wood of standing trees (there is usually a lot of moss around wherever I have found them!) Individual mushrooms are relatively small, with the cap, which starts out dome-shaped before flattening as it expands, getting up to around 5cm in diameter and tending towards orange in the centre.

O'Reilly, again on the First Nature website  – and I just want to take the time quickly to recommend this author’s rather wonderful book Fascinated by Fungi  – suggests that the genus name of Hypholoma, meaning ‘mushrooms with threads’, is in part due to the gauzy partial veil that connects the stem to the rim of the cap on young fruit bodies as they emerge. 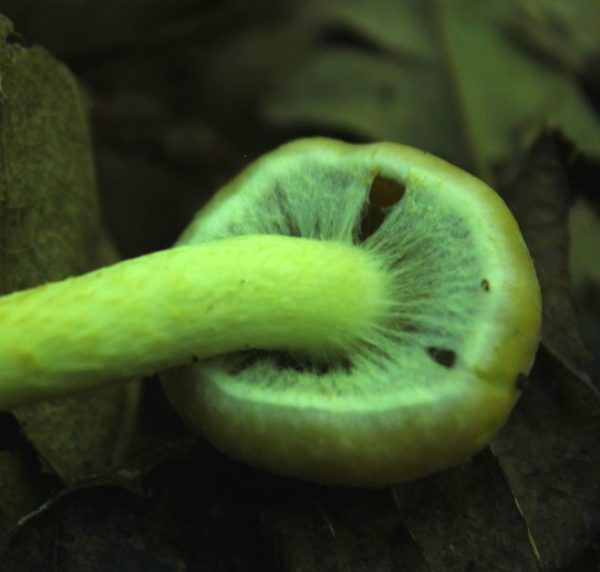 In fact, even when the cap is fully opened, remnants of this veil are perceptible on its margins and also on the faint fibrillose “ring zone” at the top of the stem where it was once attached which, as Roger Phillips’ describes in his Mushrooms and Other Fungi of Great Britain & Europe, is “often made more obvious by trapped purple-brown spores”. If one takes a print by leaving the cap on a white piece of paper for several hours, this spore colour is another key to identification.

The stem is yellow, like the cap, with a slightly scaly, fibrous pattern to it and darkening towards its base. It varies between 4-10cm in length and is relatively narrow, typically thinner than a centimetre, and often curved. Slightly confusing is that not a single one of the fungi guides I possess explicitly mention that it is hollow, as can be seen below and also in the cross-section in Phillips’ book. 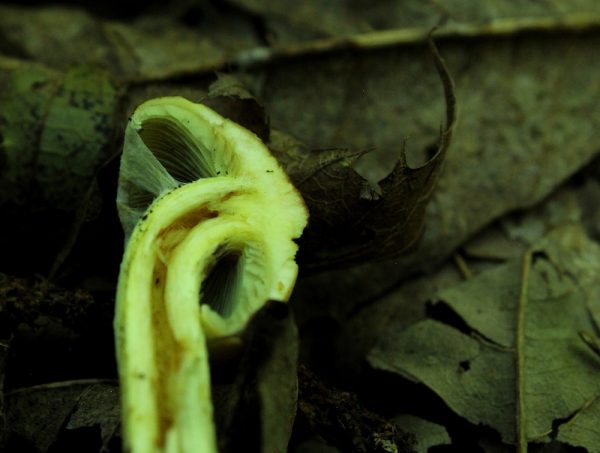 The gills are adnate (that is they are attached to the stem to their full depth) and crowded, or densely packed together. They start out as the same sulphur yellow colour as the flesh, but turn towards olivaceous yellow-green and then dark brown. This slightly sickly green-about-the-gills look is another one of the features aiding positive identification of the Sulphur Tuft. 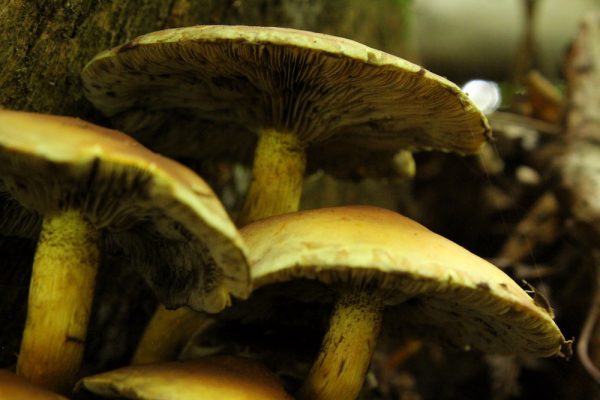 Sulphur Tufts are an omnipresent part of the woodlands landscape during the mushroom hunting season, appearing en masse all the way from June to December. They are distinctive and easily recognisable, and the only way you are likely to confuse them with anything else is if you are not paying attention. 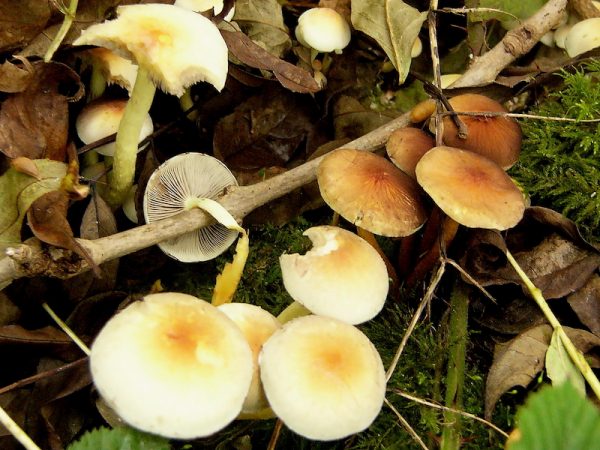 That said, there is still some room for variation within these descriptive parameters, and this in itself is good reason to pay closer heed if you are concerned in pinpointing your find down as accurately as possible. For example, if you really want to get into the finer details, there are quite a few other species in the Hypholoma genus, such as the smaller, darker Snakeskin Brownie (Hypholoma marginatum), with its distinctive snakeskin patterning on the stem, or the larger russet-coloured Brick Tuft (Hypholoma lateritium), not to mention a host of others without English common names.

And then there is that other common woodland species that also appears in great numbers in dense tufts or clumps ranging in colour from yellow to dirty brown, and which is itself, as Shelley Evans and Geoffrey Kibby write in their Pocket Nature: Fungi (2004), “one of the most confusing for the beginner to identify as it has such a variable appearance.” This is Armillaria mellea, or the Honey Fungus. No doubt we’ll get to discuss this species in a little more detail in a future post, but I’ll mention it just in passing for now if only to draw attention to the differences with Hypholoma fasciculare.

The name refers to the colour, though some might say that there is a fine line between honey-coloured and sulphur-coloured, especially in the dull half-light of the forest. The most obvious distinction is that Honey Fungi are larger, with the cap reaching about 15cm in diameter and a stem of a similar length. The cap is also covered in fine light coloured scales, although these disappear with age and in any case, some specimens are rather scalier than others. 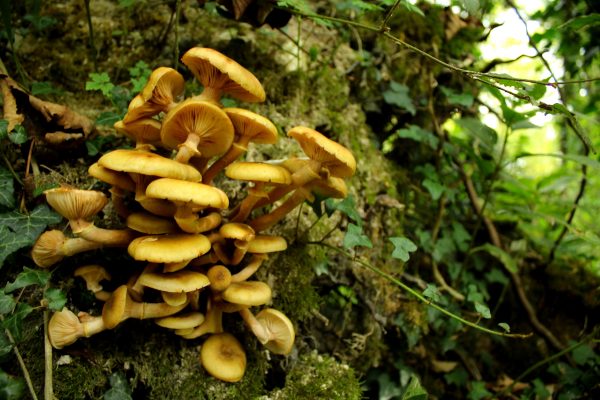 One major physical difference is that the Honey Fungus possesses a conspicuous ring around the stem, but from an ecological standpoint, there is a key divergence. Sulphur Tufts are saprophytic or saprobic, meaning they feed off decaying organic matter, 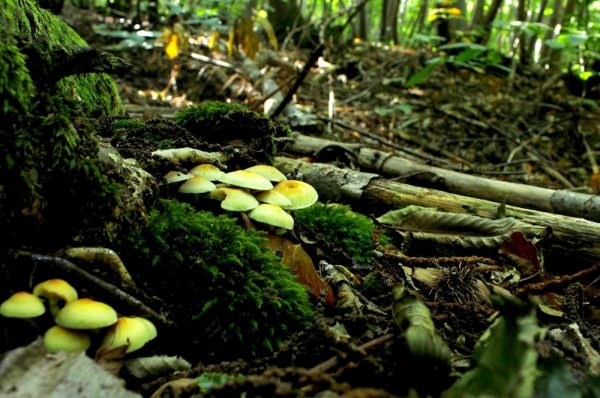 in this case breaking down the cellulose of dead wood and leaving the lignin, a process that takes several years and leaves the rotten logs or stumps for other fungi, bacteria and insects to move in and continue the process of breaking down. The Honey Fungus, however, is parasitic, a pathogen that feeds off living trees and does them no good at all. 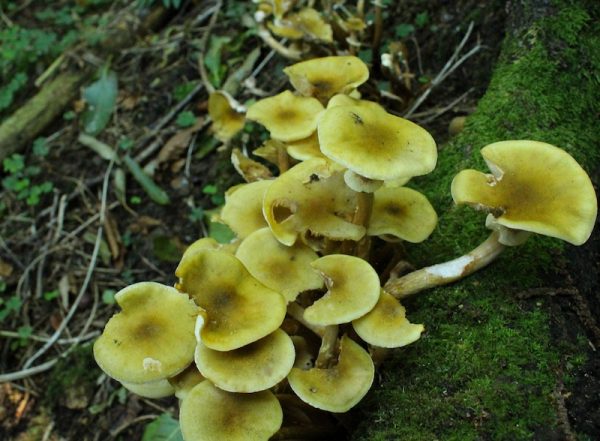 In other words, Sulphur Tufts are in many respect handy things to have around your woodlands, while Honey Fungi aren’t. 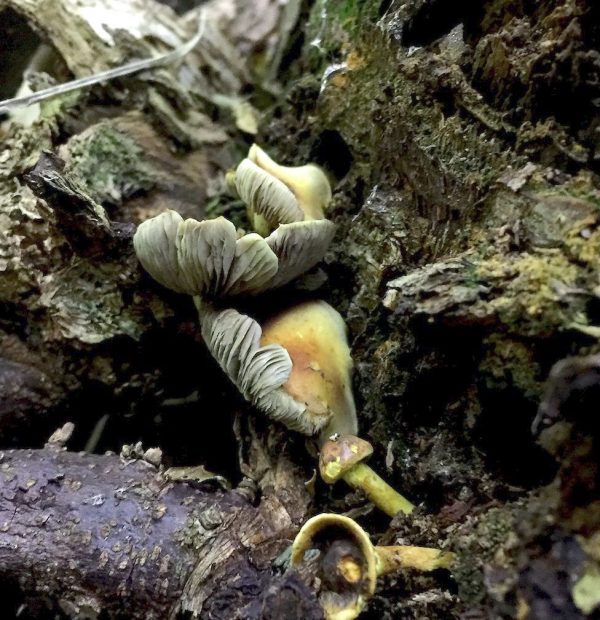 Are you sure they are Sulphur Tufts, because these grow on dead wood like fallen trees or decaying stumps, so if around the base of the rose bush, they would have to be growing on wood itself, presumably buried beneath the soil, if you can’t see them growing directly from the wood. Sulphur Tufts don’t grow on living wood anyway, but as you point out, they serve the purpose of clearing away the dead wood as part of the process of returning it to the soil. The maggot analogy is a good one. These are effectively cleaning up things for you. They won’t kill the plant. Also, I’ve never heard of a cat or a dog eating mushrooms or getting very ill from them, so I think you are safe there.

Trawling through the internet looking for guidance I found this article so my apologies for joining the conversation 2 years late. I have an old rose bush in my garden and yesterday I noticed what I’m pretty sure are sulphur tufts around its base. The bush does have old rotten wood around its base but the plant itself is massive and very healthy. My question is, do I leave the mushrooms there to eat away the deadwood (I guess in the same way that maggots can be used on complicated injuries to clear dead flesh) or are they going to kill the whole plant? Also, I have 2 cats. What are the chances of the cats eating these and becoming very ill?

Thanks for alerting me to this practice of using fungi as dyes. I found an interesting article on this website here. I don’t know how easy it is to cultivate Sulphur Tufts, but they are exceedingly common fungi found on rotten woods, so I wonder if anyone has even tried growing them?! http://midgaardshave.com/mushroom-dyes-of-2017/

interested in using fungi to dye with, told that this mushroom produces dye. Have you heard of this, have question, like some of our edibles can be grown on wood pellets etc in a controlled environment. Has anyone tried growing any native fungi to dye wool etc