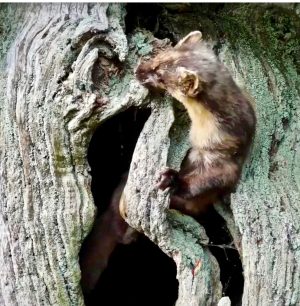 The woodlands.co.uk blog has visited the topic of rewilding and reintroductions on a number of occasions; this Autumn will see a major conference in Stirling that will focus on that .   It is to be held at the University of Stirling on the 21st September - entitled The Big Picture Conference - bringing rewilding to life; further details can be accessed here.  A woodlands representative will attend the conference and report in due course.

Quite what is meant by rewilding often depends on who is speaking or writing about it.  Dave Foreman is generally accredited with the introduction of the term and his focus was on the large scale rebuilding of ecosystems (and particularly the role of top predators); these could then sustain themselves with little further human intervention.

A number of large(r) mammals have been reintroduced to certain areas - for examples, wolves in the north western United States, Iberian Lynx in Spain and Elk in Denmark, Pine Martens in Wales, whilst Scotland and Devon have seen the reintroduction of beavers. 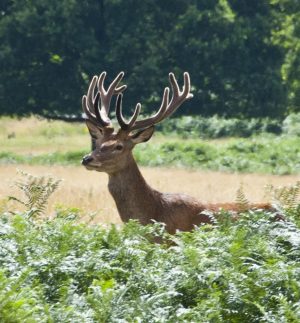 However, some argue that Scotland could encourage various ‘degraded’ ecosystems to restore themselves - i.e. rewilding on a significant scale.  The effects of deforestation, grazing of sheep and deer, the burning of moorland, the introduction of non-native trees have all contributed to the loss of natural, self-sustaining ecosystems, plus ecosystems have become fragmented.

Only a small percentage of the land in Scotland is national nature reserve and native woodland is limited.  Caledonian forest represents a unique ecosystem in the U.K. but it is now just a remnant of the vast wilderness that once existed in Scotland and indeed across the Continent – as  boreal forest.  One example of this natural forest can be seen at Glen Affric.  The woodlands here are a mix of pine, birch and oak trees, offering a rich environment and haven for wildlife. Such natural woodlands could be expanded into a large network with inter-connected corridors that would allow animals such as the red squirrel, capercaillie and crested tit to flourish.  As the Trees for Life website says “Our vision is of a revitalised wild forest in the Highlands of Scotland, providing space for wildlife to flourish and communities to thrive.”

The woodlands here are a mix of pine, birch and oak trees, offering a rich environment and haven for wildlife. Such natural woodlands could be expanded into a large network with inter-connected corridors that would allow animals such as the red squirrel …..

Councils seem to be making use of spare ground by planting wildflowers, not exactly rewilding but it helps the local wildlife and saves councils money on mowing those areas. It’s a win-win situation.

There’s good wildflowers here if anyone is interested, the ones from normal shops aren’t that great. https://thegrasspeople.com/wildflower-seed

[email protected]
Thank you. It’s a great help to have articles which explain a term which you keep coming across – in this case “rewilding” – in an accessible way. The re-introduction of beavers in Devon has been a fascinating project. One can see that sea eagles being released on the Isle of Wight could also be considered rewilding.
The article prompted me to explore the “Trees for Life” website. A revitalised forest in the Highlands of Scotland – how good it is to have such a positive vision and to know that there are people working to make it a reality. I have bought us a tree.