The Fairytale Forest – a Source of Symbolism 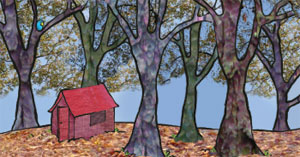 Anyone embarking upon the journey of exploring forest symbolism finds themselves, perhaps like Little Red Riding Hood waving goodbye to her mother at the garden gate, on a vast voyage punctuated with the joys and dangers of the psyche, steeped in ancient myth and legend and infused with spiritual meaning.

It is no accident that so many fairytale characters find themselves having to traverse danger-laden tracts of woodland. In a most practical sense, as the ancients dreamed up those stories and even when the oral traditions were finally written down in the middle ages and later, the lands of northern and western Europe were thick with woodland. The dangers were palpable: from rogues and bandits lying in wait for unsuspecting travellers to opportunistic wolves hungry for the kill.

In modern times the fairy tale has provided rich pickings for literary critics looking to plunder the depths of symbolism found there. The father of psychic exploration, Jung, maintains that the sylvan terrors that figure so prominently in children’s tales symbolise the perilous aspects of the unconscious: its tendency to devour or obscure reason.

In many cultures, the forest is dedicated to god or ancestor worship. A place where offerings are made and initiation rituals to test the psychic realm undertaken.

In An Illustrated Encyclopaedia Of Traditional Symbols, JC Cooper writes   ‘Entering the Dark Forest or the Enchanted Forest is a threshold symbol: the soul entering the perils of the unknown; the realm of death; the secrets of nature, or the spiritual world which man must penetrate to find the meaning.’

In Women Who Run With The Wolves, Clarissa Pinkola Estes analyses the messages conveyed to us by the ancients in tales such as Beauty and the Beast. For Beauty, it is her father who ‘bumbles into a lethal deal because he knows nothing of the dark side of the world or the unconscious, the horrible moment marks a dramatic beginning for her; a forthcoming consciousness and shrewdness.’

This dark side of the world is symbolised by the beast, of course, her father’s lack of clarity, his clouded vision and inability to navigate the true path by his losing himself in the woods.

As for Little Red Riding Hood, straying from the path and into the woods is similarly dangerous and filled with treachery. Symbolically, those who lose their way in the uncharted forest are losing their way in life, losing touch with their conscious selves and voyaging into the realms of the subconscious.

And yet, in legends such as Robin Hood, or the great Hindu love story of Rama and Sita, forest becomes a hiding place, a sanctuary. The forest provides refuge for great heroes who after a period of exile re-emerge into the world to fight for vengeance and justice. Their time in the forest (a full fourteen years in the case of Rama) could perhaps be interpreted as a period of personal development. A rite of passage perhaps?

In his book The Uses of Enchantment: The Meaning And Importance of Fairy Tales, Bruno Bettelheim explores the significance of the forest in fairy tales. He writes:

‘Since ancient times the near impenetrable forest in which we get lost has symbolized the dark, hidden, near-impenetrable world of our unconsious. If we have lost the framework which gave structure to our past life and must now find our way to become ourselves, and have entered this wilderness with an as yet undeveloped personality, when we succeed in finding our way out we shall emerge with a much more highly developed humanity.’

The forest offers an antithesis to the town. In ancient times when Europe was greatly covered by woodland, the forest represented the boundary of civilisation. The forest was literally a wild place, the village or town merely a place where man had cleared a settlement. There were many who found refuge in the forest, not just criminals, and those in exile, but shamans, holy men and women, poets, freethinkers and of course trolls, elves and fairies.

Even in contemporary fairytales such as Nausicaa, Hirao Miyazaki’s film about a young girl’s fight to save a post-apocalyptic world, the forest is a healing place, where trees filter the deadly pollutants created by mankind. Miyazaki, who is widely considered Japan’s greatest animator, uses forests as narrative tools within his films, delineating them as places of magic and transition.

Today, still, woodland remains as a refuge from institutional order, from containment and the curtailment of personal freedom. Forests are places full of mystery, where imagination and the subconscious can run free, where rites of passage take place, where we can return to our primal selves.

Justine Gaunt is a writer and journalist and co-director with Simone Wood of Appily Ever After Publishing, a small publishing company producing fairytale apps for iPhone and iPad.

I have been fascinated by forest symbolism, metaphor and Jungian archetypes for a long time. I am a musician and front a band called Fear of the Forest. With your permission I would like to link to your page from my website (www.fearoftheforest.co.uk) as part of an explanation of the thinking behind some of my music and lyrics. Please would you let me know whether this is OK? Thankyou!

[…] a forest inhabited by witches, dwarves, and magical creatures of all sorts. Earlier I was reading a very interesting piece written by Justine Gaunt on the symbolism of the forest. As she points out, fairy tales date back […]

Are we out of the woods yet? – This sick blog

I quoted and linked to this excellent article on our latest Barking Planet children’s literature blog.
Best wishes,
Robert McCarty

[…] Indeed, in Grimm's Fairy Tales, the hero always goes into the forest. The Fairytale Forest – a Source of Symbolism. Anyone embarking upon the journey of exploring forest symbolism finds themselves, perhaps like […]

[…] If you are interested in reading more about the symbolism of forests in fairy tales, look no further than this article by Justine Gaunt. […]

The Magic of Forests - Agnil's Worlds

I would very much like to contact Justine to enquire whether she would mind if I passed a copy of this splendid piece to the Woodlands Trust – of which I am a member. How may I contact her please ?