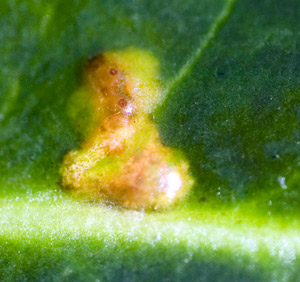 Phytomyza ilicis is a (dipteran) fly that lays its eggs in holly leaves.  It is one of the few insects that is able to make use of holly leaves as a food source and somewhere to live (when a larva).  The female fly lays eggs in the holly leaf (near the main veins or midrib – on the underside) using a thin tube or ovipositor.  The eggs are usually laid in early Spring when there are young and ‘soft’ leaves.  Older leaves have a thick and tough cuticle that is far more difficult to penetrate.  The larvae or maggots emerge from the eggs and tunnel their way along the midrib / veins emerging some time later into the lamina or blade of the leaf.  Here they feed on the photosynthetic tissues of the leaf – the palisade and mesophyll layers, creating a leaf mine (see featured image above).  The number of leaf mines per leaf is a maximum of three and often just 1 or two. 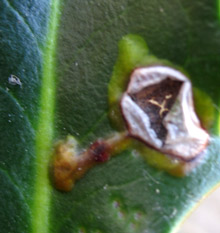 After a period of feeding, the larva turns into a pupa.  The pupal stage is one of internal reorganisation [metamorphosis], when the body plan of the insect is ‘redesigned’ (for a picture of the pupal stage see http://www.nhm.ac.uk/nature-online/species-of-the-day/common-species/phytomyza-ilicis/index.html). After a while, an adult fly emerges from the pupa and from the leaf mine via a small hole (less than a millimetre in diameter).  These may be seen on the leaf surface. 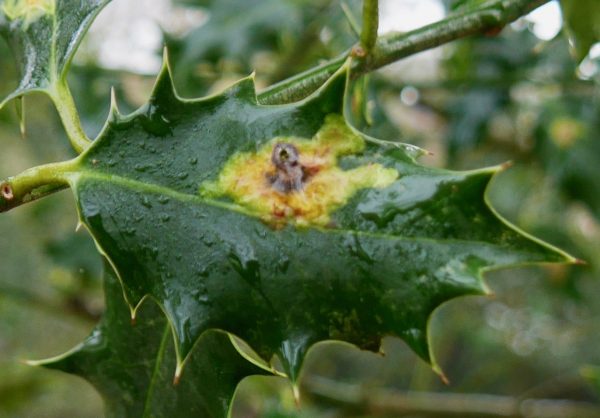 The holly leaf miner is common throughout Europe.  For further information - see the links below :