The life cycle of bumblebees – Part 2 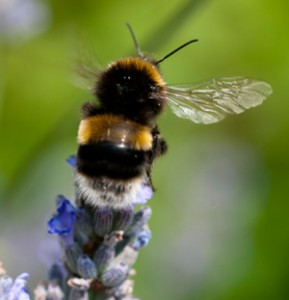 The first bees to emerge from the eggs are all females. When they emerge they are ‘white’ and their wings are crumpled. Soon, blood or haemolymph is pumped into the veins of the wings – and the wings expand and then harden.   It takes longer (1 / 2 days) for the body colours to develop.

Before long, some of these young females or workers will venture of of the nest to look for food.   They will also take on responsibility for the next batch of grubs, which the queen will have laid whilst the first generation of workers were pupating. The queen now no longer gathers her own food, but is fed by her worker offspring.

The workers first flights are short as they build up ‘information’ about their surroundings and flowers to visit. Food begins to flow into the nest and more ‘honey cups’ are produced by the workers.   By mid-summer, there may be hundreds of worker bees, all supporting the founding queen, who continues to produce eggs. However, at some point the queen starts to produce eggs that will hatch to give males and females. 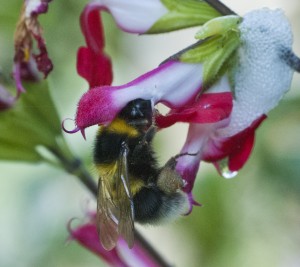 When the young queens and males emerge from pupation, they feed and may make short trips from the nest. Soon, however, all will leave the nest and the original, founding queen – who is now ‘old’ and frail. Her energies and reserves have been depleted in the production of hundreds of eggs. The ageing workers die off and the food supply dwindles. Soon, all will be dead and beetles and woodlice will scavenge the nest – nature recycling the materials. 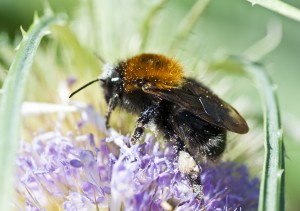 molehills and compost heaps offer possibilities. The young queen may burrow down some 10 cm, and create a small space in which to hibernate; here, she can  survive temperature below freezing, but is at risk of drowning in persistent wet weather.   It is perhaps surprising the amount of time that a queen bee spends in hibernation - some hibernate for 6 or more months. Hibernation is a means by which the young queen avoids dangers above ground - such as disease / parasites, starvation and predators (e.g.  crab spiders, wax moths*, robins and great tits).  Those that survive the winter will emerge from the soil early in the next year, ready to start the cycle again.

* the wax moth caterpillars feed on nest debris, but as they grow they switch to feeding on food stores and even grubs / larvae. This effectively destroys the nest.