The life cycle of bumblebees (Part 1). ~ by Chris 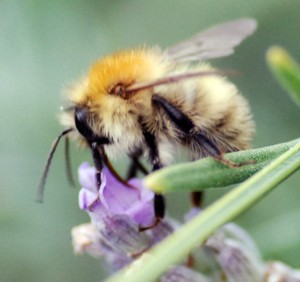 Wherever the nest is, the queen collects and forms a ball of the insulation material in a central space.

Then, the queen constructs a ‘cup’ of wax.   This wax is produced by glands along the body, and molded by the legs and mouthparts (mandibles). Once formed, the wax ‘cup’ is filled with honey (essentially concentrated nectar).

In addition to foraging for nectar, the queen will collect pollen which, with the addition of some nectar /honey, is fashioned into a small, pea-sized ‘ball’. The ‘ball’ is finally covered in a layer of wax.

If the queen has fed well, then her ovaries will have developed and will be ready to lay eggs. The eggs are fertilised as they pass out of the body, using sperm stored from the mating that happened the previous year. A batch of eggs (usually 16) is placed inside the ‘pollen ball’, which is again sealed up with wax. The eggs are ‘sausage shape’ and cream in colour. 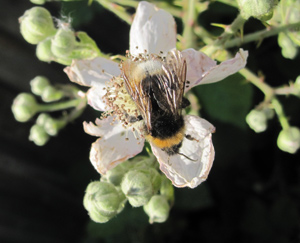 Once inside the pollen ball, the bumblebee eggs are incubated - rather like the care extended to birds’ eggs.   They are kept warm by heat energy generated by the queen – who shivers and her muscles generate heat energy to warm the eggs. Shivering uses up energy at a prodigious rate, so the queen makes use of the nectar/honey store.   However, this does not last so the queen has to leave the nest (in search of nectar); but the eggs cannot be left for long or they will cool and development will slow (or cease).

If kept at the right temperature, the eggs will produce grubs or larvae in about four days. The larval stage of all insects is a feeding stage – in which the animal builds up cells and tissues; and grows. In order to grow though, the larva / grub has to shed its skin / cuticle (this moulting is known as ecdysis) and the new one (formed beneath the old one) allows for expansion.  Moulting happens three times within 12 / 14 days and the grubs increase in size substantially.

Next, the grub / larvae spins a cocoon from a protein thread. Within this, pupation and metamorphosis occurs. The tissues of the larva are completely remodeled – to form antennae, eyes, legs, distinct internal organs. This transformation takes about two weeks – at the end of which time, a recognizable (but white) bee emerges.

related posts are shown in the side bar menu
https://www.woodlands.co.uk/blog/flora-and-fauna/the-life-cycle-of-bumblebees-2/

[…] Such Spring queens when they emerge from hibernation would normally prepare to lay their first eggs and establish a colony.  When a queen starts to set up a colony, she will secrete wax and form it into ‘cells’ for nectar and pollen., and then begin to lay eggs and ‘incubate them’. […]

[…] Bumblebee nest sites vary from species to species. The more common species prefer dry, dark cavities / holes but nests can turn up in a surprising variety of places.; for example – in abandoned rodent holes, or under sheds, or in compost heaps.  Some nest above ground making nests in long, thick grass, while others make nests in trees, bird boxes, and even lofts   Bumblebee nests vary considerably in size depending on the time of year and the species; a well-established nest can contain up to 400 bees. […]

[…] give rise to several hundred ‘daughter’ workers.  Later in the summer, males and new queens hatch from eggs and they leave the nest and go in search of a mate.  When fertilised, these queens go on to […]

[…] emerged from hibernation.  They now need to feed and then find a place to create a nest.  The queen will then lay eggs, which will become ‘daughter workers’.  Later in the season, males and new queens hatch […]

Great idea for a blog and fantastic information. I’m hooked!

Fascinating article – Ive tried making appropriate ‘homes’ but never yet succeeded, but I didn’t know there are so many types :-0

Thanks Chris! This is excellent. I look forward to the next one!