The Turkey or Iron Oak

The Turkey Oak (or Quercus cerris) is is a fast growing, tough tree; capable of surviving exposure in coastal regions. It was introduced as an ornamental tree into the UK in the eighteenth century,  being native to south east France across to the Balkans and Turkey.   It often has a long straight trunk (or bole), with branches that are somewhat more slender than those seen on English oaks.

One of the tree’s distinctive features is the bark, which has orange fissures near to the base of the trunk. Unfortunately, its timber is of little use as it splits and warps during seasoning.

The leaves are distinctive and different from those of the native oaks (sessile or pedunculate). Whereas the leaf of the latter is quite broad, the leaf of the Turkey Oak is quite narrow and more ‘angular’ see featured image above; it is also hairy or downy on its lower surface. The buds and acorn cups are unusual in that they have whiskers!

The Turkey Oak is considered by some to be a "weed" or pest species because: 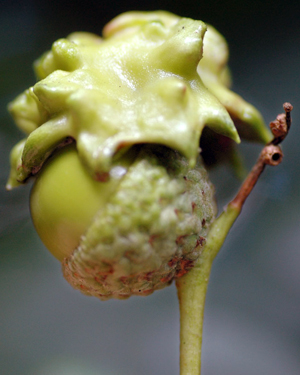 A gall is an abnormal growth; caused, in this case, by the development of wasp eggs within the plant’s tissues. The wasp (Andricus quercuscalicis) lays eggs in the catkins of the Turkey Oak, these hatch and develop into wasps which in turn lay their eggs in the flowers of the pedunculate oak. The acorns that form are grossly mis-shapen – and are called Knopper Galls.

In some areas there are now systematic attempts to remove Turkey Oak and other non-native species from woodlands and forests.

better late than never. this is a message to rt denny. we have just been given a felling licence to fell 60 turkish oak as the new forest don’t like turkish oak because they course so much damage. if you reqire more info reply back i am on this site regually

I have several weed tree Turkey Oaks of poor quality that has grown over the last 50 years-I want them removed as they are self sets in what was originally a kitchen garden that had been neglected and overgrown. They are obviously Turkey oaks and have had this confirmed by a tree surgeon- ( A written report was submitted)however, the t.p.o in Cornwall insist they are sessile oaks. Since, other people have also identified them as Turkey Oaks and recognise they are poor quality with leaf die back and one already dead. I really do feel they will seriously damage the good native sessile oaks in the close vicinity. As they are definitely Turkey Oaks how can I get someone to convince the T.P.O. If you can advise in this matter I would be obliged-Thank you R.T.Denny

[…] Quercus petraea (sessile oak) and Q. robur (pedunculate oak), and the Turkey oak, Q. cerris.  The Turkey oak was introduced to the UK in the 18th century.The first hatching of wasps is in spring from tiny […]

I am looking for oak or beech firewood for pizza oven use , I would like to know the price of each tone , and sizes , And looking for a 40 footer container on monthly bases , with photos of the wood thanks

The grounds of Battle Abbey have Turkish oaks planted out in the 18th C. The owners intended them to be used by the Navy and planted them according to the ‘no more than 14 trees to an acre’ rule (designed to give the correct curvature in the boughs) but mistakenly planted Turkish oaks. The Navy refused them and they stand today – though perhaps they should be felled because of the wasps…

[…] Quercus petraea (sessile oak) and Q. robur (pedunculate oak), and the Turkey oak, Q. cerris.  The Turkey oak was introduced to the UK in the 18th century.The first hatching of wasps is in spring from tiny […]

Galls and Oaks | The Woodlands.co.uk Blog

“Unfortunately, its timber is of little use…” I know a lovely woodland in Kent where the owner, a hundred years ago, planted turkey oaks. It is said he did that so that the trees would not be cleared for timber in the future. And they remain there to this day, a memorial to a man who grew trees for love, not for profit.

Chris Forrest – Yes, it burns well if seasoned. In fact, that’s just about the only thing it is good for!

Try looking at
http://www.surreycc.gov.uk/sccwebsite/sccwspages.nsf/LookupWebPagesByTITLE_RTF/Firewood?opendocument and scroll down to ‘Burning logs’ there is some mention of using turkey oak there.

Does it burn if well seasoned?