Not only do oak trees form part of our landscape but they also support an enormous range of organisms. Birds may make their nests in the canopy, spiders spin their webs in the twigs, squirrels gather the acorns, and many insects devour the leaves.  However, some insects make a home in the tissues of the trees and create new structures; these are called plant galls.

Galls are abnormal growths formed when plants are ‘infected’ with various insects or mites.  Often these strange structures are formed as a result of the egg laying activities of certain wasps.  Gall wasps are often small and rather insignificant unlike the structures they form.  The female wasp lays an egg in the tissues of a plant and, as this egg develops, it produces various chemicals that modify the growth of the plant so that a new structure or gall is formed.  Within this gall, the wasp grows and develops emerging as a fully formed wasp.  Many hundreds of different types of galls can be found on oaks around the world.

One gall that is found on oaks in the UK is the marble gall.  This is formed by the marble gall wasp, Andricus kollari.  However, it is not native to this country.  It was brought here in the nineteenth century (about 1840) by a Victorian entrepreneur interested in the tannins in galls for the manufacture of inks and dyes. 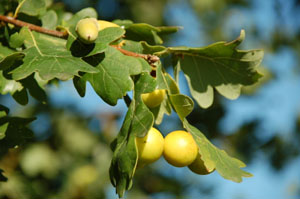 The wasps come from the Eastern Mediterranean and first established themselves in the South West of England.  Within 40 years, they had spread to the north coast of Scotland.  It was able to spread quickly because the species needed for it to complete its life cycle were already present in the UK:  native oaks, Quercus petraea (sessile oak) and Q. robur (pedunculate oak), and the Turkey oak, Q. cerris.  The Turkey oak was introduced to the UK in the 18th century.The first hatching of wasps is in spring from tiny galls less than 5mm in diameter on the Turkey oak.  Then there is a second hatching in the autumn on the native oaks – these galls are much bigger and spherical (up to 30 mm in diameter).  A gall starts off green but changes to a brown colour in the autumn.  A small neat hole is usually to be seen in the side of the gall, where the wasp has emerged.

Another gall that may be found on pedunculate oaks, when Turkey oaks are nearby, is the knopper gall.  This is caused by a different species of wasp, Andricus quercuscalicis.  This wasp lays its eggs in the young acorns of pedunculate oaks and these cause rather strange shaped galls to form that can be green, yellow or red in colour.  It has a second generation in the spring on the Turkey oak where it gives rise to small conical galls on the male catkins.   Knopper galls were first observed in the UK in the 1960s. 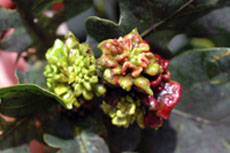 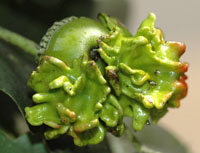 […] formers may lead very complex lives – as has been outlined in a previous blog, which described the insects associated with the knopper galls and marble […]

We found some knopper galls in our wood, lovely!
Scroll down for the pictures