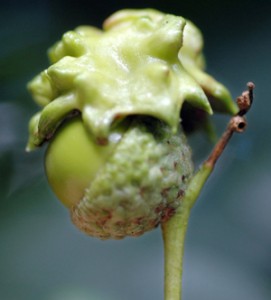 What is a plant gall?   As with most things, opinions vary but one of the definitive books on the subject by M. Redfern and R.R. Askew “Plant Galls” *offers the following description:

“a gall is an abnormal growth produced by a plant under the influence of an organism ...... ; it involves enlargement and proliferation of plant cells which provide shelter and food for the gall maker.  The gall of a particular gall former is constant and specific in form denoting that, although it is composed of plant tissue, its growth is regulated by the gall former”.

The essential features of this description are :

A gall may be formed due to the presence of a virus, a bacterium, a fungus or an insect. 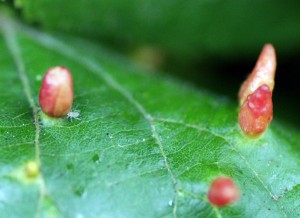 Insects are often the cause of gall formation.   For example, some 70+ different galls found on (British) oaks are associated with insects – particularly Hymenoptera, that is, insects with membranous wings.   Typical hymenopteran insects are bees, wasps and ants.  The gall-inducing insects typically include the gall wasps or Cynipidae but also gall midges, which belong to the fly family or Diptera and certain other specialised insects.  The initiation of a gall is through the development of an insect egg that has been deposited within the plant tissue.  The developing insect / larva alters the hormonal balance within the plant tissues so that specific and unique structures are formed.  Sometimes quite weird, coloured and elaborate structures emerge.

Though an insect may be the cause of a gall being formed, it may not be the only insect to be found in a particular gall.  Sometimes, other insects lay their eggs within the gall – so that their offspring can access the same food store as the gall forming larvae.  This may leave the original occupant of the gall unharmed, but there can be a ‘fight’ for finite food sources.  Insects that make use of galls in this way as known as inquilines (or 'lodgers').

Other insects, known as parasitoids, make use of the actual gall-causing larvae / insects by laying their eggs on or in them – so that they serve as the food source for the young of the parasitoid species.   The parasitoids are able to sense the presence of a larva within the gall, penetrate the structure of the gall and deposit an egg on or in the developing larva.  Examples of such parasitoids are chalcids and some ichneumon flies. 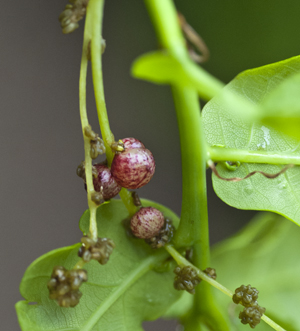 The final type of insect / arthropod that may be found in a plant gall is a follower.   A follower merely takes advantage of the structure of a gall after the original occupant has left.   They may make use of the exit hole created by the gall-former.  Followers may be earwigs, flower-bugs, weevils, spiders etc.

Gall formers may lead very complex lives – as has been outlined in a previous blog, which described the insects associated with the knopper galls and marble galls.

At this time of year, the emergent leaves of oak trees are ‘home’ to the eggs of the gall fly Cynips divisa, which cause the development of the red pea gall aka red currant gall.  These arise as distortions of growth on or near the veins on the underside of the leaves.  Each gall is ‘glossy’ / shiny and has the appearance of a somewhat squashed sphere. There may be only one gall on a leaf but ten to fifteen can be seen on a single leaf – resulting a very deformed structure. The average size of a gall is 5 - 6 mm. The gall starts as a green colour, passing to yellow, orange and then red-brown.  The galls seem able to raise the level of photosynthesis in the affected leaves, and divert foodstuffs (sugars etc) to the cells surrounding the developing insect larva.

Details of these and other oak galls can be found in the excellent Natural History Museum publication “Oak Galls in Britain” by Robin Williams (note: this link downloads a PDF file). 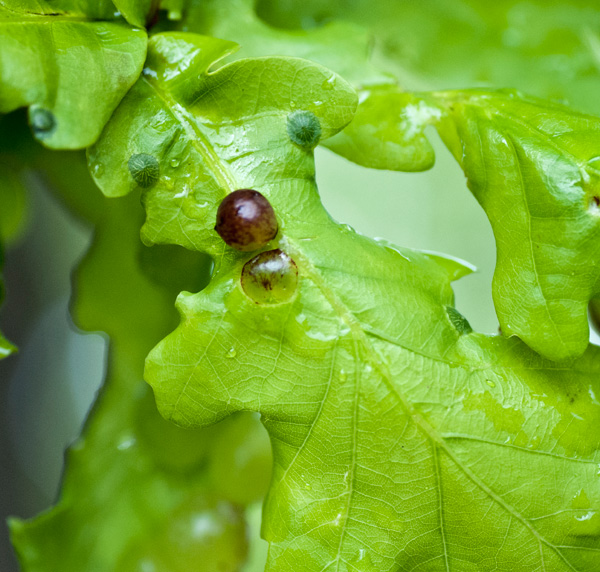