VOC’s and Pine trees. ~ by Chris 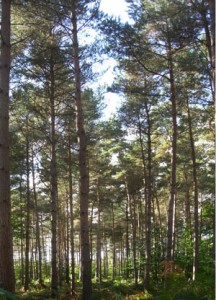 Boreal forest is found in Canada, Sweden, Finland, Norway and Russia.   Essentially, it is coniferous forest with tree species such as pines, spruces, larches and aspens.  In the U. K., this unique ecosystem is represented by the Caledonian Forest (a remnant of the vast sylvan wilderness that once existed here).  One of the larger tracts of this native pine forest is the  Black Wood of Rannoch.

One feature of the boreal forest or taiga is that it has areas of even-aged stands of trees.  This uniformity arises through cycles of natural disturbance – from forest fires to outbreaks of insect pests such as pine beetle or spruce budworm, which periodically kill off large sections of forest – but these areas, in turn, regenerate.

One feature of coniferous woodland and forest is the scent.  Conifers give off a variety of volatile oils or chemicals (biogenic VOC’s aka volatile organic compounds produced by living organisms) that contribute to this unique aroma.  Recent research has established that these volatile compounds / vapours are not only responsible for the characteristic scent, but vitally important in the formation of aerosols found in the air in and around such woodlands and forests.  An aerosol is a ‘mixture’ of very small particles (solid or liquid) in air.    Examples of aerosols include mist, cigarette smoke, or car exhaust fumes.

Whilst, it has been known for some time that the gases from pine and other conifers can help form particles that

grow, the mechanism by which they grow from just 1 nanometer (one billionth of a metre) to 100 nanometers (in about a day) has now been worked out (using a new type of chemical mass spectrometry).  The particles enlarge by forming free radicals and combining with ozone in the surrounding air, and they condense on any surface or particle that they encounter.  As they react, they grow in size and coalesce to form bigger particles so aerosols form that are capable of influencing local environmental conditions.

If the aerosols formed in and around the boreal forests can reflect sunlight, then it has been suggested that they might mitigate some of the effects of climate change / global warming.  Thus, rich woodland scents become reflective, cooling particles.

[…] important feature of the leaves is the way in which they release biogenic VOC’s – volatile organic compounds (often terpenes , from resins) – see also the […]

[…] One feature of coniferous woodland and forest is the scent. Conifers give off a variety of volatile oils or chemicals (biogenic VOC's aka volatile organic compounds produced by living organisms) that contribute to this unique …  […]

Wow! The science around trees & the effect they have on the natural world just gets better & better proving how amazing they are & how amazing their impact on us humans.