The mediterranean cypress and forest fires. 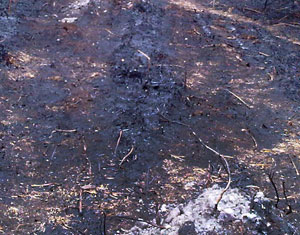 According the United Nations FAO, some two million hectares of forest were burnt in the Mediterranean region, between 2006 and 2010.  Most of these fires were 'human induced'; they (the fires) are the most frequent cause of degradation / loss of forest / woodland in this region.  In 2012, a fire swept through some 20,000 hectares of forest near Andilla (Valencia).   After the fire, it was found that though oaks, holm oaks, pines and junipers had been completely burnt, the vast majority (98% +) of the Mediterranean Cypresses were still standing, tall and green.   There followed a three year study of the fire resilience of the Mediterranean Cypress (Cupressus sempervirens var horizontalis) to see if stands of these trees might function as buffer zones to hinder or prevent the spread of forest fires.

Various laboratory investigations were set in motion that examined not just the flammability of dead and dry samples of the tree, but also the characteristics of the living twigs and leaves.  These revealed various key features of the cypress - such as the high water content of the leaves, even when it is hot and living under drought conditions.   The leaves have a thick, waxy cuticle that restricts (cuticular) water loss / transpiration;  the stomates (pores on the underside of the leaf) are arranged so the stomatal transpiration / water loss is reduced to a minimum.  When the leaves are shed and fall to the forest floor, a thick, dense layer of decaying material forms.   This layer acts as a ‘sponge’ that retains water - this also helps reduce the spread of fire.

Another important feature of the leaves is the way in which they release biogenic VOC’s - volatile organic compounds (often terpenes , from resins) - see also the woodlands' blog on pine trees and VOC's.  Trees such as pines readily release VOC’s, which can contribute to the combustion of  leaves, twigs and even trees.

However, with the Mediterranean Cypress, the VOC’s seem to be released slowly, and do not ‘help’ the burning process; this is the subject of further investigation.  The geometry of the crown of the tree, (the branches insert at angles between 45o and 90o), also helps as it means the canopy is open and dead foliage does not usually remain trapped -and therefore does not add to the flammable material.   Further planting of the Cypress and research work continues, but it seems that judicious planting with this particular tree may offer a ‘new’ tool to help counteract the spread of forest fires in this and other regions - generally contributing to resilience / robustness in the light of various challenges

[…] Robustness is a term that is being applied to various strategies associated with climate change and woodlands (links to and opens a pdf). It is all about creating an ecosystem that can adapt to, or resist, change.   One important consideration in this respect is the creation of woodland that is diverse in terms of its species composition, and its structure.  Whilst it is good to plant native trees (of local provenance), it is also important to source some from further afield – where the climate might be warmer / drier etc.  It might also be wise to include some non-native trees that might be able to grow better in a warmer climate.  Others that have been suggested are Sweet Chestnut, Oriental Beech, Walnuts, Hop Hornbean, True Service tree, Monterey Pine and various Oaks (Q. rubra, pubescens).  Some like the Mediterranean Cypress might be useful in creating wind and / or firebreaks. […]