You are here: Home > Blog > Off rotation > The management of Swiss forests.

The management of Swiss forests. ~ by Angus 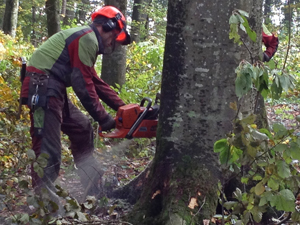 Meeting a Swiss forester this week, in the canton of Vaud, I asked if he could show me how local community forests are managed.  To my surprise, he immediately invited me to come and see an woodland area where a team of forestry workers were cutting various hardwoods.  My guide appeared quite informal but he was certainly not taking any risks as he handed me all the safety kit - a fluorescent jacket and a protective helmet attached to a visor and ear defenders.

All the forest workers were careful to see that I was closely accompanied at every stage to make sure I couldn't get hurt.  The woodland where the foresters were working was a fantastic mixed deciduous stand of beech trees interspersed with a few oak, ash and cherry. 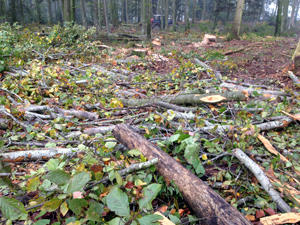 Only a little more sunlight getting in could have made the forest even more enchanting, and letting in more light was exactly what these six Swiss foresters were arranging.  Trees to be cut had already been marked with spray paint and were being taken out one by one with the aim of leaving dozens of good specimens and retaining trees with good stems in positions where they could flourish.   In choosing which of the commune's trees to cut I noticed one great difference between the Swiss foresters and some British forestry contractors choosing which trees to cut - the Swiss forester from the local canton (Vaud in this case) had no motivation to choose trees in order to maximise immediate income - he wanted what was best for the long-term health and productivity of the woodland.

My forester guide was the "strong, silent type" not prone to starting conversations but ready to answer any question I threw at him in my halting French, starting with "Why don't you just cut down the whole lot?" 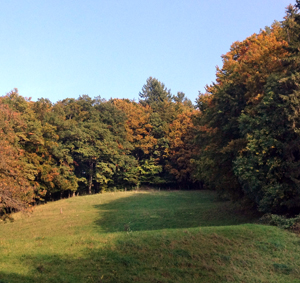 "Ah, that is not our way." he explained.  "Local people want to have a wood here permanently and it's better for the deer and other wildlife if we keep the tree cover.  Besides, the tree roots hold the hill together and prevent soil erosion.  The forest can also hold lots of water which reduces flood risks so cutting all the trees could have lots of bad results for this commune."

I asked where the cut timber butts were destined to go.  "Many of them will go to nearby carpenters and joiners who will plank them up and season them at their workplaces, but some of these trunks may also be sold abroad by our department - we supply France and Italy and even as far away as China."

At this point, he asked me to move uphill to be sure of avoiding the large beech tree that was about to be felled.  It was a 70 year old beech, established around the time of the second world war but it was now overshadowing a large and potentially valuable cherry tree - only about 6 metres away.  The beech contained about 6 cubic metres of useable timber and was a straight tree, but even a Swiss forester can't relocate a large tree - he has to decide which tree goes and which stays.  It had been decided to keep the cherry tree and fell the beech. I watched as they prepared meticulously for the felling - hacking off the moss with a bill hook so that the chainsaw wouldn't slip, making sure the immediate area was clear of obstructions and then cutting out wedges to ensure the tree would fall downhill into the gap near the track. 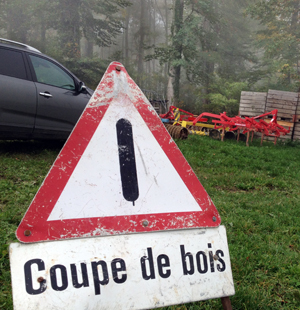 Once all was prepared one large cut was made on the downhill side to about a third of the way onto the trunk before the main cut was made at a higher level from the uphill side.  These foresters really knew what they were doing but they didn't take any risks - wearing all the safety kit possible but also working in pairs so that they could confer about how best to do each task.  Even though the Husqvarna chainsaw had been very loud, the fall of the tree itself was much louder and when it fell it shook the earth.  But what surprised me even more was the sudden silence once it had fallen and the floating down of a shower of autumn leaves.  Usually when leaves drop they leave the tree standing but this time the tree had dropped and left the leaves to follow.  "It will take about an hour to process that and prepare the trunk pieces for extraction," explained my guide exhibiting typical Swiss focus and efficiency.  This whole thinning exercise would only take a few days and they would extract about one in four of the larger trees - in the gaps, you could see that they had identified which trees to leave to grow on.  All the chainsaw operators had done some forestry training and knew how the continuous cover method worked and that they were working to create a forest of uneven age but of high productivity. 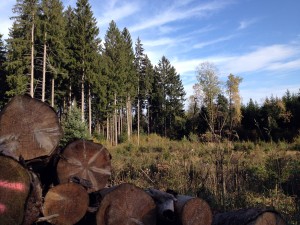 I saw that these Swiss forest workers were also working to minimise disruption to the forest floor - they used some of the branches to create a layer on the track so that their machinery would not make deep ruts and they left most of the smaller cut branches in the woodland (larger ones are used for firewood in the village).  Finally, they made sure that all cut material was lying on the forest floor so that it would rot down quickly.  It's important not to leave the woodland impenetrable or dangerous in Switzerland as anyone is allowed to wander through and enjoy these woodlands - apart from when felling is in progress!  Many people do visit the woods because in Switzerland you are entitled to collect fallen branches for firewood and there is a strong tradition of mushroom collecting - each village has someone who is an authority and will freely advise you which mushrooms are edible and which must be avoided.  Many Swiss woodlands also have fitness routes running through them with various exercise points, called Vita Parcours (fitness trails). 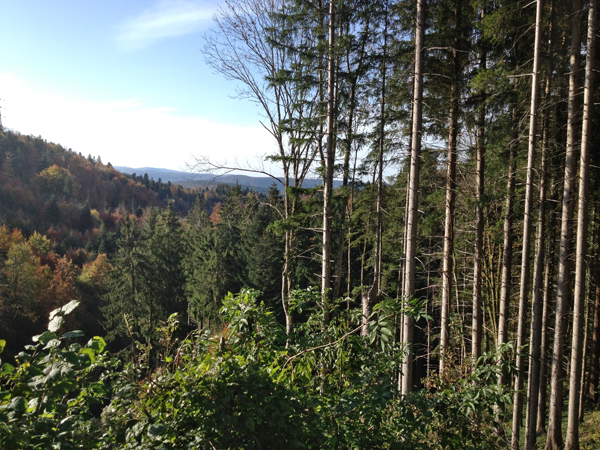 Forest in the Swiss Jura

while hiking and mountain biking throughout Switzerland this summer, I was constantly amazed at how every forest we were in seemed to be picture perfect from a forestry mgnt standpoint. In addition to God’s landscaping design, you could see how the Swiss took such care of their trees. The ones that they cut on slopes, they left a 3-4 foot stump, and piled the non-usable tree branches behind these stumps, so over time, the wood would rot into the slope, stemming/eliminating erosion. I would like to study their tactics and bring them to North East Pennsylvania. If you know of a Swiss Forestry Journal that I could subscribe to or buy, please let me know at [email protected].

Switzerland is the home of continuous cover forestry and we have a lot to learn from Swiss foresters. Not surprising really that continuous cover is so valued in a country which is prone to avalanches. Prof. Anderson of Edinburgh University visited the Swiss Jura and was inspired to set up the irregular forestry trials in Glentress near Peebles. Now tens of thousands of mountain bikers every benefit from the attractive forest landscape which has developed.

A fascinating article. I hope many people will read it & learn from it.