What has cheese-making got to do with woodland management? 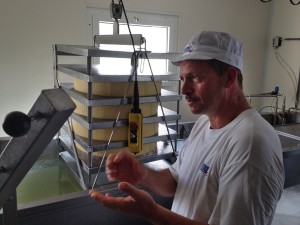 Visiting a Swiss cheese-making enterprise in the canton of Fribourg near to Gruyere made me think about the ways that the art of making cheese is a bit like aspects of forestry and managing woodland.  Alexandre Guez-Volery has been making cheese for 24 years and takes great pride in the quality of what he produces.  Mind you, he doesn't know how well his cheeses have turned out until 4 months after the production - that's when he first tastes the cheese which will still be maturing for a while.

The whole process takes at least 6 months, though stronger gruyere cheeses may take up to a year to reach maturity.  So, like woodland management, it requires great patience.

Making the cheese requires a huge input of milk, many times the weight of the cheese eventually produced, but this is all produced within a few kilometers of the "laiterie" or milk-workshop. 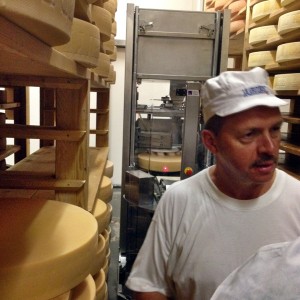 All the various by-products of this cheese production are used and virtually none are put into the drains or waste system.  One by-product is used to produce a soft cheese for immediate consumption and some parts, such as the extract from the whey, are fed to pigs.  So, as with forestry, the process is very sustainable - local inputs, a good proportion of local sales, minimal waste products and local employees.  There are four cheesemakers and an apprentice working in this small cheese "factory".  But although this is a small business, owned by 12 local farmers/suppliers, it has a large output and produces up to 24 large cheeses every day, working 365 days each year.  At a retail value of about 500 Swiss Francs (about £300) for each cheese, the annual output is therefore worth over 3 million Swiss Francs.

A key ingredient in Gruyere cheese is salt: as soon as the cheeses are pressed into shape they spend 24 hours submerged in a saline solution 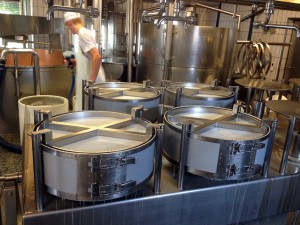 and even when they are in storage they are regularly resprayed with salt and water.  The result is that the cheese has 15 grammes of salt per kilo helping to preserve it and making it tasty.  As with harvesting of forestry, the process of salting the maturing cheeses has been increasingly automated in recent years.  This picture illustrates a machine that works 24 hours a day taking out the 34kg cheeses one by one and turning them and spraying them with salty water.  This storage and processing room holds about 3,000 cheeses all quietly maturing.  Here there is a link between the cheese maker and the local forester - the wooden planks that the cheese sits on are grown from "red pine" which is grown locally in Switzerland.  This is a hard-wearing and long-lasting softwood which does not stain the cheese. 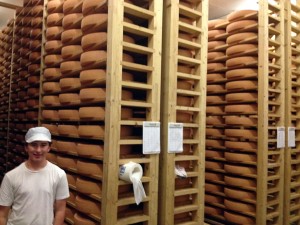 Like forestry, cheese making is, in effect, harnessing solar power.  The sun powers the growth of trees and also allows the creation of grass which cows turn into milk that in turn is delivered twice a day by each farmer to the "Laiterie" or cheese workshop.  This particular enterprise is within a short distance of various arrays of solar panels which feed clean solar energy into the Swiss electricity grid. Other energy comes largely from hydro energy, which supplies about half of Switzerland's electricity needs.  Water for the cheese making is also supplied locally from the same sandstone rocks that produce the bottled water sold by Nestle.  Despite the water supply being from a nearby spring, Alexandre still has to pay for the water at about 2 Swiss Francs (just over £1) per cubic metre and he uses over 8 cubic metres of water each day.

The forest manger, sitting in the UK eating her cheese sandwich, might reflect on the parallels between cheese-making and growing timber.  Or she might just enjoy eating swiss cheese and conclude that even spending 12 months to produce it is still speedy compared to timber production.

An interesting and well written article, but to answer the question what has cheese-making got to do with woodland management, I’d say very little, I’m struggling to find the connection but I do like cheese!.