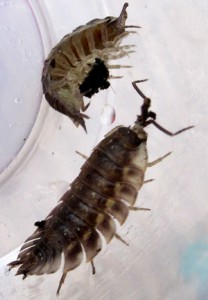 Woodlouses or woodlice have never previously seemed to me the kind of thing you would want to eat. But I came face to face with a cooked woodlouse recently when we made a woodlandsTV film about finding, cooking and eating woodlice. It turns out that they are very nutricious and as long as they are cooked they are perfectly safe. A big advantage of woodlice over slugs or snails is that they can be eaten almost immediately after collection, whereas with slugs and snails you need to put them in a plastic bag for about 24 hours so that their gut empties. For woodlice you just put them straight into the boiling water and they are soon ready to eat.

In terms of animal classification, woodlice are very near to saltwater prawns - they are crustaceans and belong to an order called the Isopoda ("same feet"). Worldwide there are 3,000 different species of woodlouse but only 40 of these are found in the UK; and the ones you are likely to come across will be from one of just five species. The 5 species that you are likely to come across  (throughout the British Isles) are :

They all seek out damp and dark conditions so the easiest way to find them is to look under stones and dead branches. We found most of ours hiding in an old tree stump.

Once we had gathered a good collection, we boiled up some water and then tipped in the woodlice where they died quickly. As they cooked their undersides went white but we kept them in a little longer as it is important to cook them for long enough to kill harmful bacteria. After just a couple of minutes, they seemed to be well cooked and ready. Using some pine needles as a sieve, we strained off the boiling water and I prepared myself for tasting my first woodlouse.

"Try one, they're lovely" said our tutor, Sean Collins. I bit into mine and found it really surprisingly edible. Not a particularly strong flavour but quite like a tiny shrimp: it's a bit crunchy but that's the shell effect (Arthropods have an exoskeleton to which their muscles attach - whereas we have an endoskeleton for the same purpose). I wouldn't describe the two I ate as filling,  but then they have the advantage that they are easy to gather and a ready source of protein. 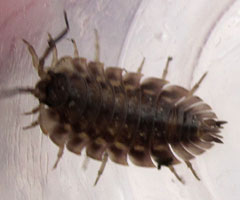 Woodlice are called many different names. In the United States, they are usually called pillbugs which is perhaps because many species roll up into an almost spherical ball as a defensive measure and look like small pills. Around the UK,  they have various names, being called cheesy bugs in Kent, cheesebugs in Berkshire and gramersow in Cornwall. They are also sometimes called potato bugs, wood bugs, chucky pigs and roll-up bugs. The sub-group or genus of woodlice which roll up into a ball is the Armadillidium .

You can find the film we made about cooking and eating woodlice here:
www.woodlands.co.uk/tv/2011/12/how-to-cook-wood-lice-bushcraft-skills/

Have you managed to herd woodlice? They are intriguing but when they appear in a social setting – eg having coffee after dinner in the front room – it is difficult to raise general conversation, apart from the obvious: they are old and come from a long line of ….

In a real survival situation, you are more likely to find woodlice than you are land snails. Snails obviously require lots of moisture and fresh green leaves to thrive and these are likely to be in short supply if you are truely in a survival situation(chances are you wont be in moist temperate woodland). Woodlice mearly require a source of rotting wood and are more likely to be found. With regards to the safety side, woodlice are safe when cooked, so can easily be collected boiled and eaten. Chances are you wont have the time to sit and nurture these snails for 4 days until they can be eaten. Snails and slugs must then be cooked properly to kill bacteria like menengitis and also the array of parasites that they harbour. Woodlice are therefore a far superior survival food. It is also likely you will find the white/cream coloured larvae of beetles, which once cooked are quite tasty, just add salt :) I ate some in Rogan national park in Sweden, they were my favourite food. Its also best to try and overcome the disgust response to such creatures before you need to survive. The first few times you try these food items that are alien to us in the west, you gag and might even vomit. Would be good to know you can eat these foods in an emergency before you find yourself in one. Afterall if you cant eat them at first and become sick, you are losing oppertunities and perhaps loosing water. Once you experiment a bit and try small amounts, you eventually find you can eat them easily. Well done for eating them Angus, they are quite tastless, its always good to have some seasoning for such occasions

I get lots of woodlice in my house, and have felt much better about them since I found out, years ago, that they were crustaceans, not insects. And I have pondered eating them because of this, but never yet overcome the ‘yuk’ hurdle. Just a point on eating slugs though, as you mention them fleetingly here: I understand it it very, very important that slugs are not only cleaned but also well cooked as they harbour bacteria that can cause meningitis (not sure which strain). As if you wouldn’t have suffered enough in the eating …….

First of all Angus, well done for giving them a go!
The boiling water does kill them very rapidly (much faster than lobsters) as they have such a small mass that their temperature rises very quickly – where as a lobsters greater mass takes longer to absorb the energy.
The logic behind this type of food as “survival food” is that it doesn’t take any special skills or equipment and you don’t burn up vast amounts of calories in obtaining it.
Some people think that in a survival situation they would make a bow and arrow and shoot rabbits and birds with it. In reality very few people would even know where to start with doing that but everyone can pick up woodlice.
and finally…
Slugs and snails: at least 5 – 7 days and not 24 hours. In 24 hours with no food they may will empty their gut contents but if they have been feeding on toxic plant material or poisonous fungi (and many do this) you may poison yourself by eating them. You need to feed them on non toxic plant material for about 5 – 6 days and then starve them for 24 hours. That is the only way of ensuring they are safe to eat.

I could not tip any creature into boiling water, however long it takes for them to die, usually longer than you think. A crab or lobster takes about six minutes to die, in absolute agony.

I suppose if you were starving, you would try all sorts, but seriously!

I seriously doubt I would ever be hungry enough to try! (but thanks for having a go, in the name of science!)