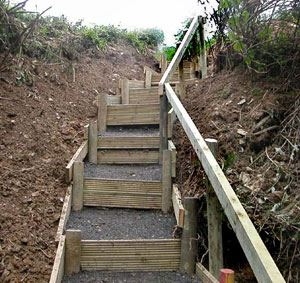 Steps can make a nice feature as well as fulfilling a practical purpose: taking you from one level to another, perhaps bridging a change in levels between two sections of your woodland track, where the slope is too steep to scramble up and down. In situations where the steps span a vertical distance of more than about six feet, a conventional flight of steps is far safer than the ladder steps described last time.But, before you start, consider the alternatives. Carving steps out of heavy clay or stony ground, most likely with tree roots to contend with too can be very heavy going.  So, take a good look at the surrounding area.  Would it be possible to reroute your track around the steep part, or make progressive changes in level though a series of single steps at different points along the track?

If not, or if you just like the idea of a flight of steps, then here’s how to do it:- 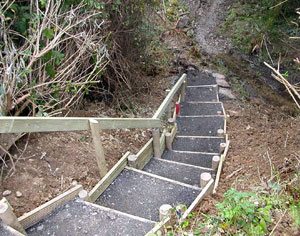 And that’s it.    Now you can ascend/descend those tricky areas of your woodland on your feet rather than bumping along on a different part of your anatomy.

Excellent article.
Am really looking forward to tackling our steps at the start of our woodland path.
2 metre rise and then 70 metres of gentle slope.