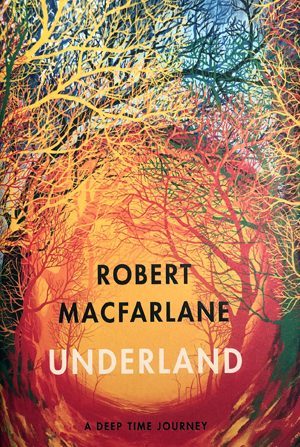 Three quarters of the way through Macfarlane’s dazzling book he recounts a conversation with Robert Mulvaney – a palaeoclimatologist and ice-core expert at the British Antarctic Survey in Cambridge. After handing Macfarlane a phial containing grains of sand, Mulvaney explains that they were extracted from a kilometre deep inside a glacier and they prove that  below the ice there was once a Sahara. “They’re beautiful” says Macfarlane. “ Desert diamonds from the bottom of the world”

“I can tell you are not a scientist” replies Mulvaney.

It is an unfair jibe. Scientist or not, Macfarlane serves science brilliantly well in his latest work, Underland - A Deep Time Journey. With every chapter he demonstrates his talent for explaining science and communicating the sheer wonder of the world through scientific goggles. The ambitious scope of his storytelling steps lightly from geology to linguistics to geomorphology onto folklore via nuclear physics and meteorology – all brought into focus with elegant prose and sprinklings of poetry. Like a skilled mixologist he serves up cocktails of scientific knowledge that delight and deliver more than the sum of the factual parts.

Tree lovers and forest folk will especially enjoy his research into the ‘wood wide web’ –  the mutually beneficial system that helps trees communicate and heal each other below their understorey via mycorrhizal fungi.  Macfarlane cleverly enthuses that the idea is “so powerful in its implications that it unsettles the ground you walk on.” In typical style he deals with the complex subject by walking and talking with a new expert friend, in this case, Merlin Sheldrake, a young mycologist. Throughout his writings Macfarlane has developed a knack of finding and describing vivid characters that add verve and passion to his explanations. True to form ‘Underland’ comes with its own dramatic cast of colourful personalities . Merlin Sheldrake doesn’t disappoint with his tales of ash forests communicating via ‘tree snogging”, 8,000 year old honey fungus extending four-square miles under Oregon soil and melanized dark fungus thriving on the extreme levels of radiation after the disaster at Chernobyl.

This multi-layered way of reading the environment is very engaging, but Macfarlane’s most impressive skill is to combine this depth with live, action-packed, travel journalism. In his previous nature writing, most noticeably ‘The Old Ways’ and ‘Mountains of the Mind’, Macfarlane has always managed to take the reader with him as a passenger on his quests and adventures.  In Underland he raises the stakes, thrilling us with his on-the-spot reports straight from the coalface (literally in some cases)  deep down below the earth’s crust. Like a literary Indiana Jones he dangles and drops into bottomless ice holes in Greenland, crawls through minuscule rock cracks beneath the Paris Metro and scrambles through mountains in ice storms to view cave drawings in Northern Norway. The claustrophobia, tears and occasional loneliness are all honestly communicated in a first person style that makes us anxious for the author’s survival. Geography lessons have never been so exciting, personal or terrifying.

It all adds up to a nail-biting account but Macfarlane leaves the most frightening underworld experience to the last, when he visits a nuclear waste processing plant deep below the ancient rocks of Finland. Here he highlights evidence and his concerns that we are destroying the ecosystem of our own planet. Encounters with climate change and experiences of hell-bent mineral extraction are recounted throughout the book. Like the underworld he explores they lie as a thread of imminent danger just beneath the surface of the boundless curiosity of this wonderful book. Read it tonight.

• Underland by Robert Macfarlane is published by Hamish Hamilton (£14).