Aspen (Populus tremula) has a very wide distribution, being found from Scandinavia to North Africa, and across most of Europe. It is more common in the north of Britain than the south.

Like Birch, Alder, and Mountain Ash, Aspen is a pioneer species - that is to say, it is one of the first to colonise an area of open ground in a wood or forest.

In many areas, Aspen reproduces mainly vegetatively or asexually by means of suckers or ramets. These are shoots produced by old roots.

As Aspen has an extensive root system, ramets may appear 40 yards away from the parent tree. All the trees in an area may be joined together through the root system and are, in consequence,  clones (a group of genetically identical organisms). They are, therefore, all the same sex, and come into flower and leaf at the same time. The number of ramets produced after a fire can be prodigious (up to 70,000 per hectare!). 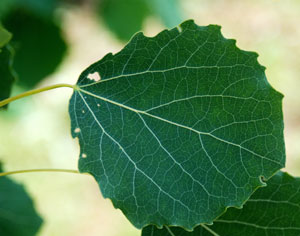 The leaves are usually rounded (though there is a point at the leaf apex), with a few ‘rounded’ teeth on the margin. The main veins stand out, sometimes having a white or creamy colour. On young suckers (ramets), the leaves may be more triangular in shape.

The leaf stalks (petioles) are unusual as they are quite long and have a somewhat flattened or compressed appearance in cross section. They are also flexible near to the lamina or leaf blade; this means that the gentlest breeze causes the leaves to flutter (hence its specific name - tremula); creating a 'dry', rustling sound.

In Spring, when the leaves open - they have a browny-copper colour. 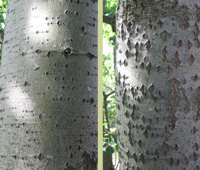 The bark is grey or green grey in colour, sometimes pitted or roughened by the presence of lenticels.

The image to the left shows young bark (on the LHS), and older bark on the right.

Aspen is dioecious: trees are either male or female and produce their flowers or catkins in March or April, before the leaves appear. Fertilised female catkins ripen during the summer and release minute seeds, which have small hairs or tufts. 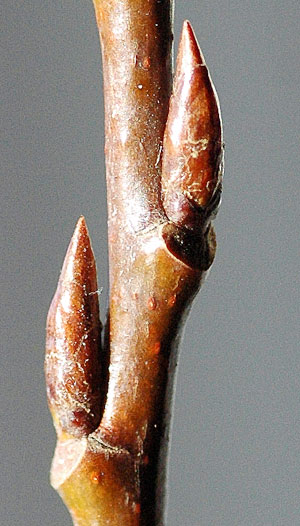 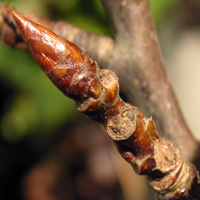 The twigs are quite shiny, and the buds brown and pointed.