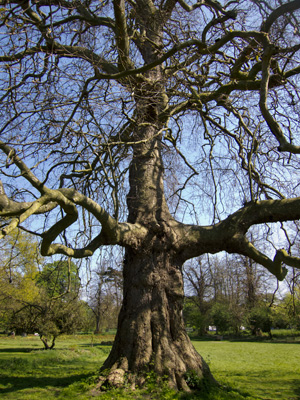 The London Plane is not a woodland tree but is often seen growing in major towns and cities. It is said to account for half of the trees planted in London. It is variously referred to as the London Plane or Hybrid Plane.

It is said to be tolerant of atmospheric pollution and compaction of the root system - hence its use as a roadside (and also parkland) tree.  The trees can grow to a considerable height (some may reach one hundred feet), but are sometimes pollarded. 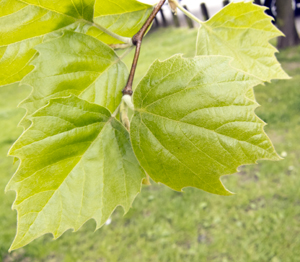 The leaves of the London Plane are simple and 'maple or sycamore-like'. They are large and palmately lobed and veined, with a noticeable leaf stalk / petiole. The top surface is a darker green than the lower. The veins are quite noticeable.

When first formed, the leaves bear many small hairs (which can cause problems to hay fever / allergy sufferers).

The tree is deciduous and in Autumn, the leaves can form vibrant yellows and orange before they fall. 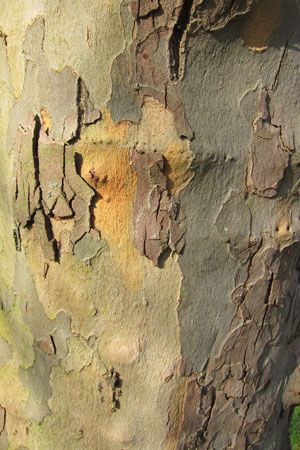 The London Plane might be said to have a 'self- cleaning bark'. All trees 'breathe' or exchange gases through pores or small slits (lenticels) in their bark, and bark is gradually renewed and replenished as time goes by.

However, in the case of the London Plane it sheds 'large flakes' or sections of its bark exposing new material of a variety of colours (brown, grey, yellow).

The 'flakiness' is due to the tree increasing in girth, coupled with the relative rigidity or inflexibility of the bark.  Pollutants that had been absorbed by the bark are thus 'discarded', helping to maintain the health of the tree.

The buds are quite smooth, shiny and conical in shape: they may have a red colour to them - see image below. 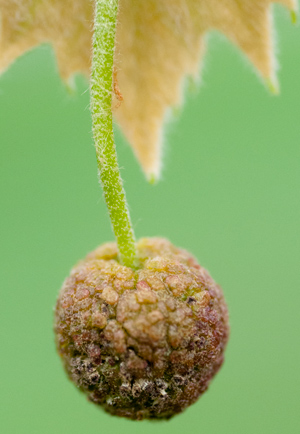 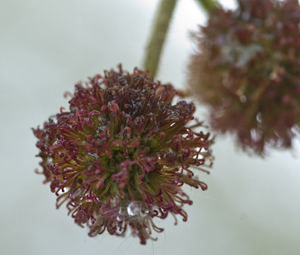 One of the distinctive characteristics of the London Plane is the dried, brown seed balls, which remain on the branches throughout the winter. The seeds are released from these in the Spring. 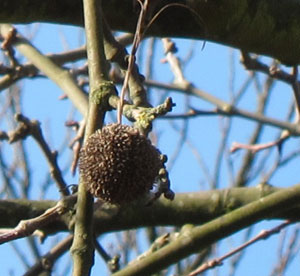 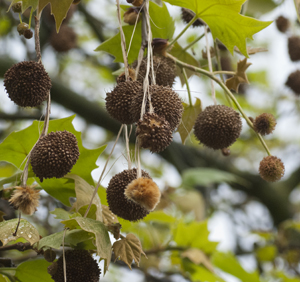 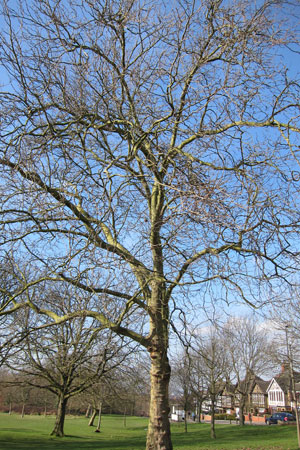 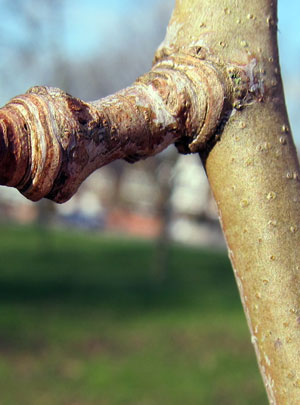 There are clear and noticeable leaf scars around the stem, underneath buds etc.