Turkey Oak is a tree that grows vigorously, reaching a height of 40 metres.

Turkey Oak is not a native species, but is native to an area from south east France across to the Balkans and Turkey. Its wood (unlike that of the pedunculate or sessile oak) has little value as the timber splits and/or warps during seasoning. It can be used as firewood but in a wood burning stove as it tends to throw sparks!  Turkey Oak is host to a parasitic wasp that also forms galls on native oaks. Some now regard it as an invasive species and seek to remove it from woodland.

The leaves (which are arranged alternately) are distinctive and different from those of the native oaks (sessile or pedunculate). Whereas the leaf of the latter is quite broad, the leaf of the turkey oak is ‘narrow’ and more ‘angular’. The top surface of the leaves is a dark, rich green but the lower surface is paler. A leaf stalk or petiole is clearly visible. 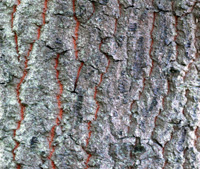 The trunk is often long and straight with branches that are somewhat more slender than those seen on English Oaks. One of the tree’s distinctive features is the bark, which has orange coloured fissures near to the base of the trunk

The male flowers hang in catkins and the female ones form acorns, that sit in cups or cupules. In the turkey oak, this cupule is covered with a ‘forest’ of tiny outgrowths so that the cup is scarcely visible.