Probably the most widely distributed conifer in the world. It is one of the UK’s three native conifers - the other two being Yew and Juniper. Sometimes described as an ‘honorary hardwood’, as it grows slowly and produces a good quality, hard timber. 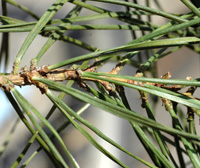 Simple leaves. The needles grow in pairs and have a smooth edge. They are blue-green in colour and about 5 cm (2 inches) long. They normally remain on the trees for 2-3 years, with the old needles turning yellow in September or October just before they are shed. 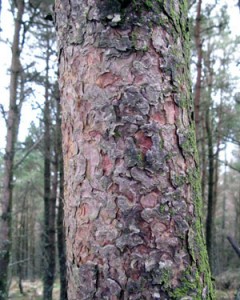 Drops of sticky resin often cover the tree's buds, and also provide a natural preservative for the wood: if a Scots pine dies while it is still standing, the skeleton can persist for 50 or even 100 years before falling down, because the high resin content in the sap makes the wood very slow to decay.
On young branches, the bark can be quite thin and a pink/red colour; whereas on a mature tree it can range from grey to pink. This colour may be more obvious on the top part of the tree. The bark forms thick flakes, which have deep cracks or fissures between them. 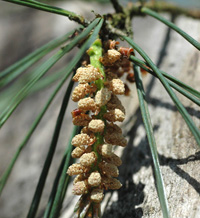 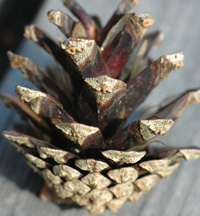