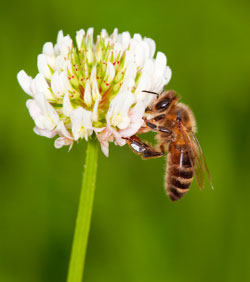 Bees can ‘tell’ each other where to find food – nectar and pollen.  Karl von Frisch worked out the meaning or code of this language – the waggle dance; he was awarded the Nobel Prize in 1973 for his efforts (e.g. The sun as compass in the life of bees.).  Through this dance within the hive, a bee can indicate to its fellow workers information about the direction, distance and ‘quality’ of food on offer.

The ‘waggle’ of the dance is the movement of the bee’s abdomen and this gives information about the direction of the food.  The wings vibrate or buzz; the longer the buzzing the further away the food source.  The speed with which the bee dances, and the number of repetitions says something about the nature of the food on offer.

At the Laboratory of Apiculture and Social Insects at the University of Sussex, Dr Margaret Couvillon is also working on the intricaciesof the waggle dance.  She and her students have decoded many hundreds of variations of the dance.  In some cases, it is possible to relate the dance to the local geography and locate the food source; one dance revealed that the bees were foraging on a patch of crocuses in a nearby wood.  If a good source of nectar or food is nearby then it is important that this is communicated to other bees as searching for food is an energy consuming process.  In the Spring, the bees fly about 700 metres for food but later in the year they may have to fly further.  Research by LASI (Laboratory of Apiculture and Social Insects) has showing that bees will fly long distances, up to 14 km, for particularly rich sources of nectar such as heather. The moving of hives great distances by truck (especially common in the States) might be one of the factors that contribute to the collapse of colonies; as the bees would have to learn new foraging behaviours. 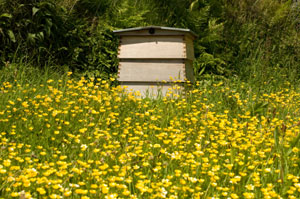 Bees find flowers through their colour, markings and scents.  Scents are due to the release of volatile oils (hydrocarbons), and these travel through the air giving clues to bees and other pollinators.  However, recent research in America has shown that pollutants such as ozone (from car exhausts) reduce the distance travelled by these floral messages.  It has been estimated that scents might travel up to 4000 ft in the 1800’s but now they would only travel a 1000 feet in the polluted atmosphere of our cities.  If bees cannot build up food reserves in the summer then the colony will have problems surviving the winter.

Information about the foraging activities of bees yields information about which parts of the countryside, and which flowers are good for bees.  This may help ‘us’ create a more ‘bee friendly landscape’.  By understanding the preferences of bees and how they find flowers and food,  the more likely it is that we might be able to establish corridors or areas between the acres of cultivated land to support bees and bumblebees.

Further information on bees and bumblebees at :