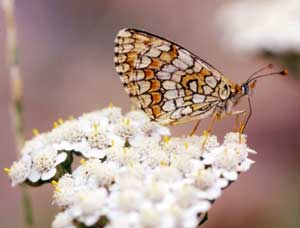 Generally speaking, the sight of butterflies marks the return of spring sunshine and the warmth associated with long summer days.   However, after three wet summers in a row, some of our rarest butterflies are under threat. The summers of 2007 and 2008 were characterised by very wet weather, and July and August last year were marked by above average rainfall. Butterflies that have been particularly affected by the wet weather are the :- 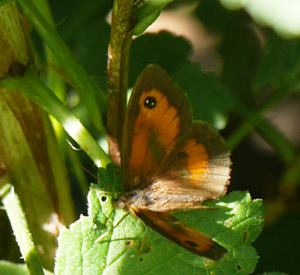 Heavy rain makes life difficult for butterflies, partly because the temperature is usually too low for them to fly.  If they cannot fly, then mating is unlikely.  If butterflies cannot breed in any given year then the next generation is not produced, and the current generation dies out at the end of the summer. Unlike many birds and mammals, butterflies do not have a second chance of breeding in a subsequent year. Their complete life cycle [egg – larva (caterpillar) – pupa (chrysalis) – adult (imago)] has to be completed each year to ensure offspring in the following year, and any of these stages is susceptible to the vagaries of climate.  If butterfly colonies are small (as is often the case) then localised extinction is not uncommon after a wet summer.

The Duke of Burgundy was a common sight in woodland clearings back in the 1960’s but now there are fewer than 80 colonies across the U.K.   The high brown fritillary has dropped by about 50% in recent years and again the number of colonies is low, perhaps only 50.  The wood white has also suffered, as it needs flower-rich woodland to survive.

The  large blue butterfly was lost from the UK landscape in the late 1970s.  Its  numbers were reduced (especially in areas like Cornwall and the Cotswolds) to very low levels; in part by over-zealous lepidopterists.  Even when such collecting was banned, the numbers of the butterfly continued to fall.  This was associated with the decline in grazing by sheep, cattle and rabbits (due to the effect of myxomatosis on the latter).  Consequently,  traditional grasslands became overgrown.  These  grasslands were needed by the large blue to complete its life cycle albeit with some help from a particular species of ant (Myrmica sabuleti).  Through the work of Professor Jeremy Thomas (Oxford) and  David Simcox (CEH),  the large blue has been successfully reintroduced to restored and managed meadows in the south west of England

[…] In order for a woodland to offer this range of micro-habitats, it needs to be managed and managed continuously – rather like the productive woodlands of old, when coppicing was extensively practised.  Coppicing was the principal form of woodland management over much of the lowland areas of the U.K., till the end of the 19th century.  Coppice produced a regular crop of timber and woodland products.   Coppicing is thought to date back into ‘prehistory’, certainly the Domesday Book indicates that its practice was widespread at that time.   The abandonment of coppicing is thought to have been a major factor in the decline of several moth and butterfly species – notably the woodland fritillaries. […]

[…] pest control have undergone significant declines – for example , bees, moths, hoverflies and butterflies.   This is also true for hedgehogs – whose numbers have dropped dramatically in recent […]

Jeremy Thomas (see above) has been appointed OBE for his services to science (June 2011)
http://www.bbc.co.uk/news/uk-england-dorset-13729710

At the end of July, there is the BIG BUTTERFLY COUNT – see
http://www.bigbutterflycount.org/