Dormice – Not Mice At All! 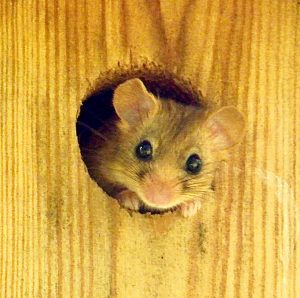 These are surprisingly interesting animals which might turn out to live in your woodland. The first surprise is that they are not mice at all, although they are rodents.  There are two sorts of dormice you might come across – the edible dormouse (Glis glis) and the native dormouse, sometimes called the hazel dormouse and technically known as Muscardinus avellanarius. The edible one was only introduced into Britain in 1902 and is only found in a 200 square mile area around the area near to where it was introduced – Tring in Hertfordshire. It was farmed for eating in Roman times and is still eaten as a delicacy in Slovenia, but in England it is protected and therefore, despite its name, is not on any menu.

You are much more likely to find the native dormouse, and it is this one that this blog is concerned with. If you do find one it is distinctive in having a furry tail, a golden coat and black eyes. The native dormouse hibernates from about October until April and it is one of only three British mammals that hibernate – the others being the hedgehog and the bat. If you accidentally disturb it, it will probably be in its classic sleeping position curled up with its tail wrapped around its head and this suggests the origin of its name - from the French “dormir” - to sleep. Actually they are protected species under the WCA (Wildlife and Countryside Act 1981) so you must not deliberately disturb them.

The lifestyle of the dormouse is a bit surprising as it lives most of its waking life up trees at nighttime. It is a good thing that it can climb so well because its main foods are seeds, flowers and aphids. It eats a wide variety of mostly protein-rich foods but, like humans, cannot digest cellulose. Your woodland is more likely to contain dormice if it is in the south-east of England, East Anglia or Shropshire, and even more likely if your woodland is part of a larger woodland block. More isolated woodlands can be host to dormice if there are hedges to connect to larger wooded areas. In any event there won’t be many as they occur in low densities. This low density pattern seems to have helped in that they have no natural predators.

Dormice have a long life expectancy for a small mammal and will live for 4-5 years. Within that time the females will have only one litter each per year.

They have often been thought of as limited to hazel woodlands, but this idea may arise because hazel is usually coppiced in the winter every 7-8 years and coppice workers are likely to report the finding of hibernating dormice. In fact they occur much more widely than just hazel woodlands.

There has been a lot of research on the distribution of dormice that included the Great Nut Hunts of 1993 and 2001 in which chewed hazelnut shells were sent to researchers at Royal Holloway. This established that dormice are virtually extinct in the Midlands and Yorkshire. There have been re-introductions but only at about one site per year for the last 15 years or so.

How a hazelnut is chewed gives a good indication of what animal has eaten it. You can see more on this and on the Great Nut Hunts at: http://www.greatnuthunt.org.uk/about/default.asp. In essence a dormouse will chew a circular opening in the top of the shell to get to the nut. “If you are looking out for hazelnut evidence,” says Ian White of the People’s Trust for Endangered Species, “you should look in late September, after the hazelnuts have matured but before the leaf fall.”

Do You Have Dormice in Your Woodland?

If you think there may be dormice in your woodland, you may like to make a dormouse box. This is a bit like a small bird box but the hole is at the back to discourage birds from using it and so that the dormouse can climb in from the tree trunk . If you really want to encourage dormice you can get the “Dormouse Conservation Handbook” free online at: http://www.english-nature.org.uk/pubs/publication/PDF/Dormouse_web.pdf . Its conservation status is further described in the UK Biodiversity Action Plan at http://www.ukbap.org.uk/UKPlans.aspx?ID=462 .

A species like a dormouse is an “umbrella species” in that if the conditions are right for dormice they will be suitable for a wide range of other woodland species. They need a diversity of plant species, a good structure to the woodland (ideally uneven aged trees) and trees which are not too crowded together. Hedgerows that provide a link between woodland areas are good for dormice but also for many other species. Many people want to protect the dormouse just because it is native and represents part of the diversity in our woodlands.

Have you come across any evidence of dormice in your woodland?

I wish people would stop keeping cats. They are totally unsuited to domestication and do massive damage to wildlife. Their victims are not even killed quickly, undergoing on average 25 minutes of torture before being put out of their misery, or simply left to die. I am amazed how certain species, particularly birds, manage to keep going at all, considering they are also up against the elements, climate change,loss of habitat, food and shelter, not to mention natural predators, (though at least they are indigenous and part of the eco-system.) Our summer bird visitors fly thousands of miles to nest and raise a brood here. Finding a nesting site is hard enough; they then make up to 400 trips a day to feed their young. Then a cat discovers the nest and destroys the lot or, as I have witnessed, simply sits and waits below the nest for them to come out.

I’m tired of hearing cat owners say ‘But my cat doesn’t catch anything.’ Unless it’s confined inside permanently, it will be catching anything it can and will keep going back to that site or nest for more.

How sad that our wildlife, and something as rare and elusive as the beautiful little dormouse cannot escape this. There’s a simple answer to those saying how sad they felt when their cat brought in a mouse. You cannot care about wildlife and keep a cat. If you want something easy to keep, get a rabbit – they are cheap to purchase, easy to feed, can be kept indoors, are soft, cuddly and above all – harmless.