Huts and hutting in Scottish Woodlands – time for change? 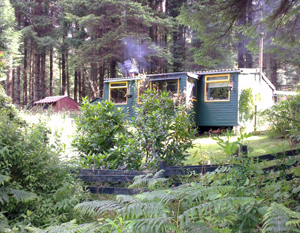 In England and Wales people are concerned about what sort of shed you are allowed to put up in a woodland and indeed there is much planning history on the subject, but in Scotland similar questions are described as "hutting" issues.  Woodland owners need somewhere to store their tools and to shelter when it rains wherever they are. But in Scotland,  there is a distinctive history of hutting - during the interwar years (1919 to 1938),  Glaswegians wanted to spend time outside Glasgow at the weekends and for short holidays, so they arranged to build a series of huts at Carbeth and elsewhere.  Their huts allowed them to escape from the city and to learn about the natural world.  Many of the original huts are still there today and in active use.  Carbeth is the largest grouping and contains 140 huts and it is reported that the owners of the huts recently bought the land they sit on for £1.5 million (in total).  They have a website at: http://www.carbethhuts.com/about.html 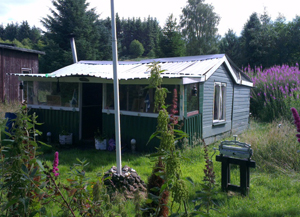 There is pressure to extend the hutting tradition and the Scottish government have been lobbied to support such moves.  Individuals such as Donald McPhillimy, Lesley Riddoch, and Andy Wightman have lent support to changing the planning law to encourage the building of huts and of hutting in general.  The Scottish government have recently been discussing what to do about the pressure to build huts and a Scottish planning policy consultation during the summer (2013) asked specifically about huts.

That document received an enormous number of responses on huts (about 800 replies) which illustrates the level of support for accommodating changes to allow people to build such shelters and sustainable short-term accommodation outside the cities.  Advocates of new rules on hutting have suggested a maximum size of 5 metres by 6 metres which is pretty large in hut terms but it would set a limit on hut-building so that these do not become permanent long-term housing developments.  Some Scottish hutting campaigners have argued that huts should fall under a new category of development in planning terms.

One observer suggested that huts would be a vast improvement on caravans in so many ways and pointed to the way the Norwegians and Swedes organise short term accommodation in the countryside.  He said, "we have caravans whilst Scandinavians have huts".  This is certainly a problem for woodland owners and because the law on huts is so unclear many woodlands owners have discretely built their own shelters but without any planning permission.  With more and more people owning a small piece of Scotland with a view to managing it and enjoying it there is certainly a need for more clarity on what huts you can and can't build.

Donald McPhillimy, who advises woodland owners on forestry management drew our attention to the Scottish hutting debate and we are grateful to him for the use of the pictures here of some of the huts at Carbeth near Glasgow.  Donald is an advocate for the organisation "Reforesting Scotland" and is on the editorial board of the excellent publication of the same name.  You can see their website at reforestingscotland.org or the campaign for 1,000 huts at http://www.thousandhuts.org

I think the way to get hutting restarted in England and Wales is via “Woodland Hutting”, building now what people are already doing via forestry permitted development and reducing the wider impact by being out of sight in woods. I think now is the time to really push this, with the forthcoming changes to the planning system in England at least.

as of dec 2018 what is the situation with hutting in scotland , do simply buy a piece of land and build a hut with the spec given or do i need to supply plans for approval and await an ok from scottish regional council, it seems that there are very few examples from which to learn. my wife and i are keen to buy and build an off grid structure on our own land , but before purchasing the plot of woodland we need to see some evidence of success from other hutters or at least understand the process we are to follow

So far, in the “UK”, the Hut issue is,effectively, a Scottish issue.
Any spread over borders would be down to respective/devolved govts or local authority and as would likely be the case, triggered by enough individuals who are passionate enough to get a ball rolling.
Just like Scotland, although the Hut concept has the advantage of being established for some time, the current work to support the culture, or at least get it more accepted, has taken many years to reach this point. Google thousand huts and reforesting Scotland, and you`ll get an idea.
Having said that, while browsing google maps for a parcel of my own, I found a bizzare Hut/shack heaven on banks of the Wye nr Bewdley. Loads of them. Check it out, there was a small freehold parcel there just last week on Preloved for 10k.[18m x 50m].

Do you see this as a uniquely Scottish phenomenon, or will it spread south of the border?

Hi I wondered what your ‘woodland.co.uk’position is on the proposals for changes to the Scottish planning policy regarding the relaxation of rules for recreational huts? Specifically whether you believe an occasionally used Hut, without services would be in line with the covenant associated to your woodlands for sale.