Making walking sticks – from stems picked out of the woodlands 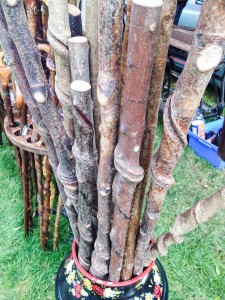 Woodlands.co.uk is 'republishing' this blog, as contact details for the Jones family are now available and several people have expressed an interest in having a walking stick 'custom made'.  The blog originally appeared in 2014. Contact email address is pj451324(at)gmail.com

Peter Jones and his sons make walking sticks on a serious scale using sticks they come across in the woods, where they do their forestry work.  They use chestnut, silver birch, oak and hazel.  But they avoid using willow, as it goes brittle once it's aged.  Apart from finding the right stick to work on they need a steamer for bending the tops of the walking sticks and a good supply of sealant and varnish for protecting the finished sticks.

"Honeysuckle makes the best twist sticks" advises out Peter Jones, who comes across a lot of twisted stems in Kent and East Sussex.  As a result, he is able to trade these with fellow stick makers in more northern English areas - they give him carved tops for walking sticks in exchange for good twisted shanks.  But even among twisted sticks there is variety: the slower growing trees such as holly and oak twist more slowly whilst the fast-growing chestnut twists quickly.  Though he also corrected me pointing out that the maker of walking sticks should really be called a "stick dresser"

Peter's first experience of walking sticks was 30 years ago when he was using sticks for "beating".  He and the other beaters used sticks to get pheasants to fly up for the "guns" to shoot. 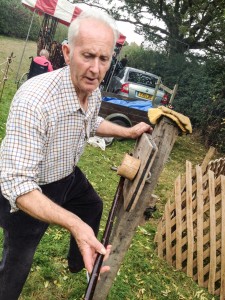 For that exercise, he first started creating walking sticks and hasn't really stopped since.  But he has become more sophisticated.

The steamer, for example, boils water in a kettle-like chamber and the water vapour fills a second chamber where  as many as 15-20 sticks at a time can be steamed, ready for him to bend over their tops.  It takes about half an hour to steam a batch and Peter uses a novel device for doing the bending.   Once the sticks are bent over, they have to be sealed quite soon so the they don't unbend themselves.

Peter Jones says that his industry is shrinking in size but not because the stick-dressing skills are dying out but because demand for wooden walking sticks has reduced.  Maybe that's because people use aluminium walking sticks or maybe, as Peter laments, "the problem is that there is this myth that you have to be old to have a stick." 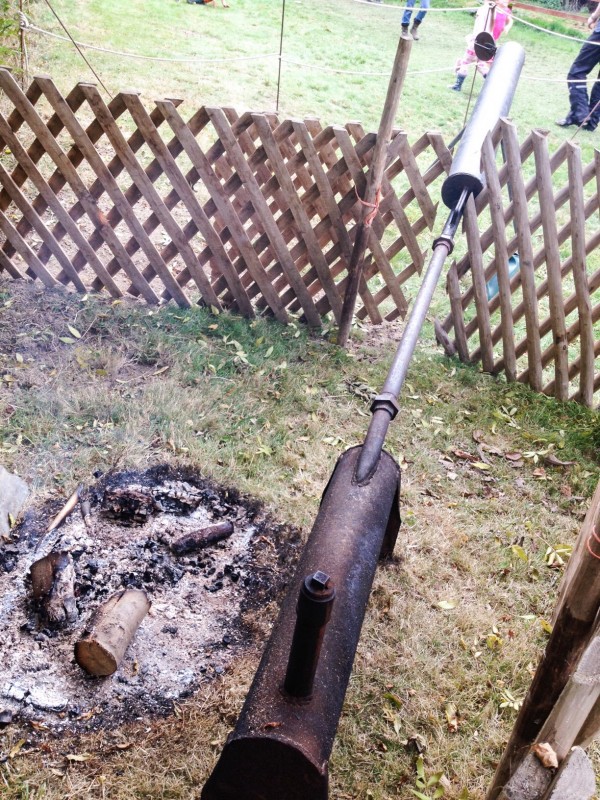 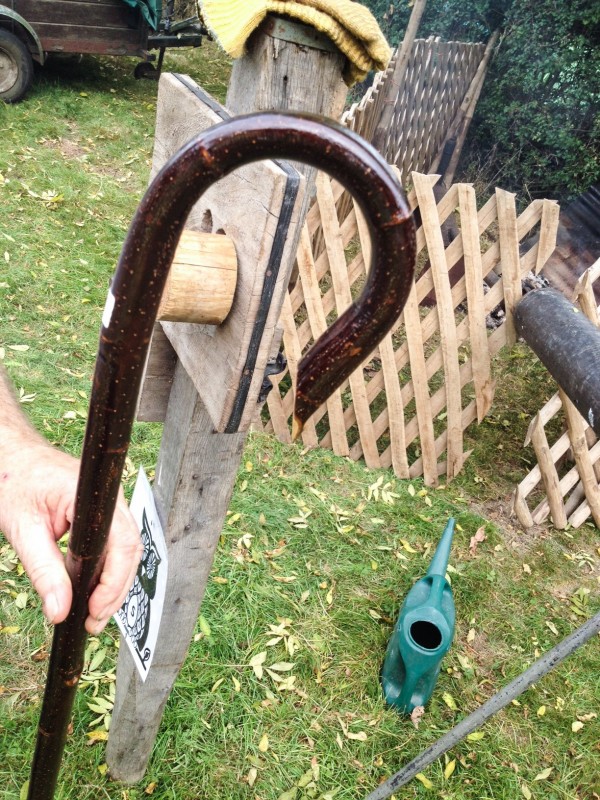 Bending of the stick 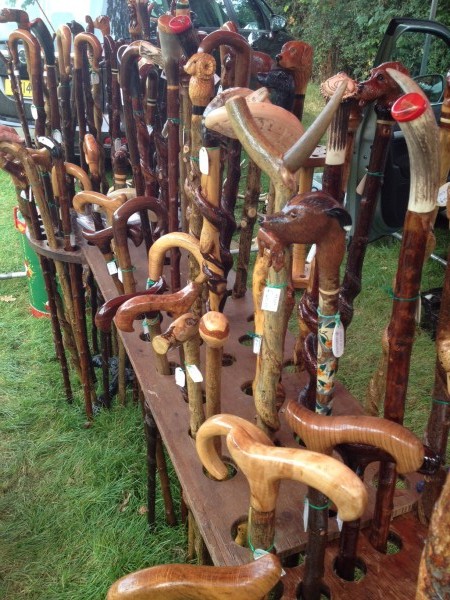 All types of stick

I’m Peter Jones’ son.
There is a request for a commission for a walking stick from Edward Church.
My contact details are as follows pj451324(at)gmail.com , any more requests please contact me by email.

Many thanks
Paul and Peter Jones

I would be grateful if you can ask Peter Jones to contact me. I would like to commission a stick.

hello Mr. Jones,
I was wondering if you could make me a stick for my 6 year old grandson who does a lot of walking. WE did have sticks made for our boys 40 years ago but cannot find any one to make them now

Details forwarded on to Ruth, who I believe you contacted.

Hi my name is Paul Jones, son of Peter Jones walking stick maker from Kent.
There was a guy in 2019 by the name of Kev Goble posted a message for Peter, I’m desperate to find him as he is my cousin and his uncle Pete would like to contact him.

Great info
Can you tell me how !omg before you can start working on a walking stick
I found a branch of a Hawthorne tree someone had broken half off the tree it was like that for a couple of months before I cut it off the tree I’ve had it for a couple of weeks , just not sure how long to leave it before I start stripping the back off and getting it too how I would like it to look ( first attempt)
Thanks
Peter

I wonder if you might make me a Cornish oak stick please, straight and about five feet in length? I’m Cornish Australian and I live in Japan, where hiking is extremely popular. I wear my national and hunting kilts on long walks and a Cornish oak stick would set off the whole image.
I’ll happily pay all postage and asking price
Kindest Regards,
Peter

Hello Mr Jones. I am looking for a very tall shepherd’s crook. Something very basic which will help me navigate a very steep bank at home so that I can deal with weeding etc. My previous 2 metre one that was invaluable for this was thrown out by mistake. And I can’t find anything as tall anywhere.

Bit random I know, but I wonder if you are the same Peter Jones from Bearsted who had a sister called Peggy???? My mum.

FAO – Peter Jones
I am looking for hurdle and coppocing courses . Can you advise?.
I live in Worcestershire, I can’t believe the amount of emails I’ve sent out on this subject without any replies.

Hello Mr Jones.. I understand from Cathy at Bentley that you will be exhibiting at the Woodfair there (15th – 17th) this month.. I am looking for a Shepherds Crook with a white (cows horn) crook and a nice brass/silver etc coller to the main Chestnut Stick.. I am 5 foot 6 inches tall.. Would you have something like this I could buy from you and collect at the Woodfair please..?? If so, what would your price be..?? Thank you.. Best regards, Lindsay Reid (Mr).

Article fascinatining, but all too short?
Would love a regular feature and lots more sticks, or mabe even some video footage, please?

Great article. I’ve made a couple of walking sticks myself but never done any steam bending. Might try my hand at this!